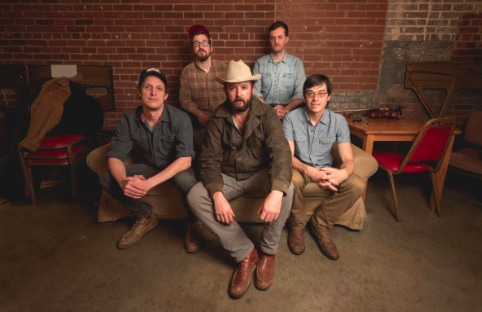 Known for their rowdy, energetic performances, Town Mountain has spent most of 2019 on the road, playing major festivals and venues across the country, including the legendary Grand Ole Opry. On September 30, the band made their debut at the iconic Red Rocks Amphitheatre in Morrison, Colorado, to a sold-out crowd alongside prolific singer-songwriter Robert Earl Keen and Grammy-nominee Tyler Childers. Today, JamBasepremiered the band’s live performance of “Down Low” featuring Childers, who co-wrote the duet with banjo player and vocalist Jesse Langlais for Town Mountain’s most recent album, New Freedom Blues.

“It’s always a pleasure to do shows with Tyler and The Food Stamps,” Langlais explains. “We love the guys and we love the music, brothers in arms! And it’s always a highlight when Tyler comes up with us and performs ‘Down Low’. Especially at a venue like Red Rocks where you can just feel the energy and magic in the air.”

The band played a number of songs from their extensive discography including their well-known rendition of Bruce Springsteen’s 1984 single “I’m On Fire”, a fan-favorite that has racked up almost 6.5 million streams on the group’s Spotify alone. Childers ended the night with what The Boot called an “epic, show-stopping jam session”, calling on Town Mountain guitarist/vocalist Robert Greer and Robert Earl Keen to join him in performing Keen’s classic, “The Road Goes On Forever”. Town Mountain recently wrapped up 2019 with one final run that included a two-night stint at Nashville’s beloved Station Inn; the band invited a handful of surprise guests to join them on stage, including Grammy award-winning songwriter Jim Lauderdale, dobro legend Jerry Douglas, and hailed bluegrass flatpicker Billy Strings. Read more about the night via Nashville Lifestyles.

Returning to the road in 2020, the band will tour the East Coast and are set to perform at Squaw Valley’s WinterWonderGrass in late March.

0
Long beloved as a great songwriter and performer on the L.A. circuit, John M. is also the host of the acclaimed web...
Read more
Behind The Song

0
Written by Russell Dickerson, Parker Welling, and Casey Brown Do you feel like you’ve hit a creative stride with...
Read more
Daily Discovery

0
Matt Baron traces the meaning of his lyrics by looking backwards. Like most of the tracks off Young...
Read more