Often credited by his full name Prince Rogers Nelson (and sometimes a pseudonym), Prince wrote plenty of his own hits as well as songs he originally recorded that became famous after being covered by other artists—Chaka Khan’s “I Feel For You,” Sinead O’Connor’s “Nothing Compares 2 U.”

Also within Prince’s catalog of credits are dozens of songs he specifically wrote with, and for, other artists—everyone from Kenny Rogers and Patti LaBelle to Madonna and No Doubt.

Here’s a look at 10 songs you may not have known Prince wrote (and co-wrote) for other artists.

Though he was never formally credited with writing this song, Stevie Nicks has always said that “Stand Back,” off her second solo album Wild Heart, “belongs” to Prince. Regardless of the final credits, the two ultimately had a 50-50 split the publishing royalties for the song.

Read our Behind the Song on “Stand Back” HERE.

The second single off Sheena Easton’s 1984 album A Private Heaven, “Sugar Walls,” of course, Prince’s sexual innuendo for a part of the female body, reached No. 1 on the Dance chart and at No. 3 on the R&B chart. The suggestive song was also listed as part of the infamous “Filthy Fifteen,” a collection of tracks deemed too sexual, or connected to themes of drugs and violence, by the Parents Music Resource Center (PMRC) in 1985.

Often using a pseudonym as a songwriter (see The Bangles), Prince went under the alias “Joey Coco” when he wrote “You’re My Love” for country singer Kenny Rogers’ 1986 album They Don’t Make Them Like They Used To.

Off The Bangles’ 1986 album Different Light, Prince gave The Bangles one of their biggest hits: “Manic Monday.” Credited as “Christopher,” Prince originally wrote the song for the trio Apollonia 6 in 1984. Released on Jan. 27, 1986, The Bangles peaked at No. 2 with “Manic Monday” on the Billboard Hot 100.

Prince wrote and produced “Yo Mister” for LaBelle’s ninth album Be Yourself, which ultimately charted at No. 6 on the R&B chart. Released on Prince also contributed vocals and played various instruments on the track.

Prince played guitar on several tracks off Madonna’s fourth album Like a Prayer, and also co-wrote and contributed vocals to the song “Love Song” with the “Material Girl” and helped produce the album.

“Love… Thy Will Be Done,” Martika (1991)
Written by Prince and Martika

Released on Martika’s second album Martika’s Kitchen, the “Toy Soldiers” singer initially started writing “Love… They Will Be Done” as a hymn in her notebook and finished the song with Prince. In later years, Prince also performed the song live and sampled it on his cover of Joan Osborne’s “One of Us” on his 1996 album Emancipation.

A gift from Prince, “With This Tear” was written specifically for Dion and was released on her second English-language, and self-titled album.

Though Prince and Kate Bush had mutual admiration for one another since the 1970s, they didn’t actually meet until 1990. At the time, Bush was considering leaving music following the death of her friend and guitarist Alan Murphy from AIDS-related pneumonia, while Prince was having another creative awakening following The Black Album. Both on opposite sides of a musical spectrum, when Bush asked Prince to contribute some vocals to her song “Why Should I Love You,” off her seventh album The Red Shoes, Prince took the song (already recorded by Bush at Abbey Road) and completely rewrote it and layered on bass, guitar, and keyboards to the track. In the end, Prince also fulfilled Bush’s first request, and shared vocals with her on the track. The pair would collaborate again in 1996 on Prince’s Emancipation track “My Computer.”

Originally recorded at Prince’s Paisley Park Studios in 1999, “Waiting Room,” was initially written for No Doubt’s 2000 album Return Of Saturn but the band decided to hold the song for Rock Steady instead. Stefani said Prince, who ended up rewriting the band’s song, he’s on  “a whole ‘nother planet, level” of talent. Prince and Stefani had previously worked together when Stefani contributed vocals to Prince’s 2001 single “So Far, So Pleased.” 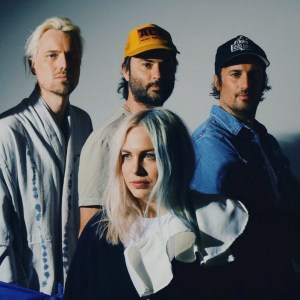