“Hello, This is David Bowie. It’s a bit grey out today but I’ve got some Perrier water, and a bunch of records,” said the artist hosting his first ever radio show as a guest DJ for BBC Radio 1 on March 20, 1979, before kicking off his set with The Doors’ Waiting for the Sun track “Love Street.”

Over the next two hours, Bowie spun 28 of his favorite songs—throwing in two of his own off his then-recently released album, Lodger, with tracks “Yassassin” and “Boys Keep Swinging”—pulling from his own stew of favorites.

Here’s a brief behind-the-song look at seven of Bowie’s favorite tunes, along with his full 28-track list and a listen to his DJ set below.

Also known as “The Inch Worm,” the song was originally performed by Danny Kaye in the 1952 film Hans Christian Andersen. Written by Loesser, who wrote many hits for Broadway (Guys and Dolls, How to Succeed in Business Without Really Trying) and Hollywood—winning an Academy Award for the Christmas tune “Baby, It’s Cold Outside,” which appeared in the 1949 film Neptune’s Daughter—the song is a subtle nod to the idea of “stopping to smell the roses” with some arithmetic-led lyrics for children.

Inchworm, inchworm (two and two are four)
Measuring the marigolds (four and four are eight)
You and your arithmetic (eight and eight are sixteen)
You’ll probably go far (sixteen and sixteen are thirty-two)

Off Little Richard’s sixth album, The King of the Gospel Singers, produced by Quincy Jones, “He’s My Star” was one of several tracks written, or co-written, by Richard for the album, which was a continuation of his departure from rock and roll and embrace of his more gospel roots after joining the ministry in 1957.

“It was just the kind of music I had always wanted to record,” said Richard of the album in the 2003 book The Life and Times of Little Richard: The Authorized Biography by Charles White. “After it was released the offers for gospel concerts started pouring in.”

“Question Mark and The Mysterians’ ’96 Tears,’ which nobody has in their record collection,” laughed Bowie, introducing the garage band’s track. “They actually got it here. It’s an extraordinary piece of music. There was another incredible [band] called [The] 13th Floor Elevators. I can’t remember that one very well. It was around the same period, I think. I guess some punk freak will sort of correct me on that.”

The title track off the band’s 1966 debut follows a man who wanted to get back together with a woman who dumped him to make her cry …”96 Tears.” Written by Rudy Martinez (Question Mark), “96 Tears” is often considered one of the first garage band hits. The song hit No. 1 on the Billboard Hot 100 in the U.S. and was the biggest hit for the Michigan rockers.

Though the band only stayed together from 1962 through 1969, they released a second album, Action, in 1967. ? & The Mysterians later reunited to re-record the entirety of 96 Tears and several other tracks on a self-titled album in 1997 with the follow-up, More Action, in 1999 (which included two previously unreleased tracks) after the band no longer had access their master recordings.

Hitmakers with “I’ll Take You There,” “Respect Yourself” and “If You’re Ready (Come Go With Me),” The Staple Sisters call out the band effects of telling untruths on “Tellin’ Lies”—telling lies can only get you by for a little while. The track was a b-side to Sisters’ 1973 soul album, Be What You Are, which reached No. 13 on the Billboard Top Soul LPs chart.

“Here are three girls that got a very musical dad and one of the girls is very, very sexy and I keep playing her records over and over again when I’m on my own,” said Bowie. “It’s The Staple Singers and it’s called ‘Tellin’ Lies.’ She breathes very well, doesn’t she? So I mean, the Roxy Music guy jumps better, but she can really breathe, she does a good breathe.”

“After I heard this track I never rode the subway again,” said Bowie. “It’s called ‘It’s Hard To Be A Saint In The City.’ That really scared the living ones out of me.”

The closing track off Springsteen’s 1973 debut, Greetings from Asbury Park, N.J., “It’s Hard to Be a Saint in the City” is the story of a young man growing up on the city streets trying to do the right thing before he’s pulled into more “unsaintly” acts. A Station to Station outtake that was previously unreleased on the 1975 album, Bowie later released his cover of the Springsteen song on his first box set, Sound + Vision, in 1989.

I had skin like leather and the diamond-hard look of a cobra
I was born blue and weathered but I burst just like a supernova
I could walk like Brando right into the sun, then dance just like a Casanova
With my blackjack and jacket and hair slicked sweet
Silver star studs on my duds, just like a Harley in heat
When I strut down the street, I could feel its heart beat
The sisters fell back and said, “Don’t that man look pretty”
The cripple on the corner cried out, “Nickels for your pity”
Then gasoline boys downtown sure talk gritty
It’s so hard to be a saint in the city

The title track off Pop’s solo live album, TV Eye Live 1977 was produced by Bowie, who also appears on backing vocals and keyboards on several tracks. For the live album, Pop pulled from his solo and Stooges catalog, including “Funtime,” “I Wanna Be Your Dog,” and his “Lust for Life,” the latter co-written by Bowie during the pair’s musical and sober-searching sojourn to Berlin between 1976-1979, when both recorded and released three albums each. Also on the album is one of Bowie’s personal favorites, “TV Eye,” which first appeared on the Stooges’ second album Fun House in 1970.

The live album pulled songs from Pop’s live performances in the U.S. in 1977 at The Aragon in Chicago, The Uptown Theater in Kansas City, Missouri, and The Agora Ballroom in Cleveland, Ohio.

“A buddy of mine, Iggy Pop, this is just something that I remember with affection,” said Bowie during his DJ set, “because it’s when I was with him on tour playing piano for him, this one is called ‘TV Eye.'”

“Here’s a band I admire very much, some very charming people—David Byrne, in particular,” said Bowie before playing the band’s “Warning Sign,” off their second album More Songs About Buildings and Food in 1978. “We’re talking about Talking Heads, of course…playing the band’s ‘Warning Sign,’ a left-field track that few would select.”

Like Roxy Music, who landed two songs on Bowie’s set, Talking Heads were given another whirl later on when he spun “The Book I Read,” released a year earlier off their debut Talking Heads: 77.

“That was Talking Heads,” said Bowie after playing a second track by them. “You see, they are different to me. I mean, they actually go and read the books. They never read any walls, I’ve read them on a wall though, next to Kierkegaard.”

In order of how Bowie played them on BBC, here is the full list of Bowie’s favorite songs, circa 1979: 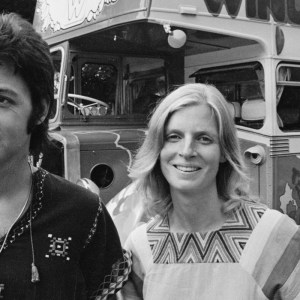