Small sales, but a big splash. 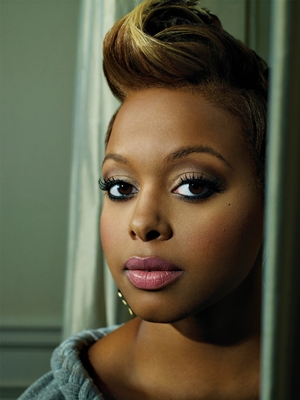 With her sophomore album, Epiphany, R&B singer-songwriter Chrisette Michele has topped this week’s Billboard 200 album charts, dethroning none other than Bob Dylan, who’s Together Through Life drops to #5 (don’t think twice, it’s alright). Michele, who won a Grammy this year for “Be Ok,” a duet with Black Eyed Peas, records for Def Jam and has guested on albums by Jay-Z, Nas, and the Roots.

According to Billboard, Epiphany’s sales tally, which reached 83,000, represents the lowest number of records sold in Nielsen SoundScan’s 18 year history of tabulating sales. However, she’s in some good company there — the only other two artists to debut at #1 with sales lower than 100,000 were Biggie Smalls (with #1’s), and Johnny Cash (with American V: The Man Comes Around.)

Mother’s Day meant a big boost in CD sales — Taylor Swift’s Fearless, which dominated the chart in the beginning of the year, saw a 42% increase this week, proving what we already suspected: moms love Taylor Swift.

Debuting this week are albums by Ben Harper (White Lies for Dark Times, #9 with 34,000 copies sold), Conor Oberst and the Mystic Valley Band’s Outer South at #40, and Yusuf Islam’s Roadsinger at #41.