May 5, 2009 — The International Songwriting Competition (ISC) is pleased to announce its 2008 winners. It is with great pleasure that ISC bestows its highest honor, the ISC Grand Prize, to Kate Miller-Heidke and Keir Nuttall of Brisbane, QLD, Australia for their song “Caught In The Crowd,” a brilliantly quirky pop song with an emotional message about schoolyard bullying and peer pressure. The Grand Prize winner takes home $25,000 in cash (US) and over $20,000 in prizes – the largest Grand Prize of any songwriting competition.

With judges as diverse as Tom Waits, Rob Thomas (Matchbox 20), Ray Davies (The Kinks), Chaka Khan, McCoy Tyner, Jerry Lee Lewis, Robert Smith (The Cure) and many more, winning the ISC Grand Prize is an accomplishment that recognizes excellence in the craft of songwriting.

In its seventh year, ISC received over 15,500 songs from amateur and professional songwriters from 100 countries worldwide, confirming ISC’s status as the leading global songwriting event. The New York Times called ISC, “the songwriting competition to take note of.” In all, ISC bestows prizes on 62 winners, awarding more than $150,000 in cash and prizes.

For a complete list of 2008 ISC winners and to hear the winning songs, go here.

The song “Caught In The Crowd” struck an emotive chord with the ISC judges for its narrative about a young girl who befriends a fellow student but then, succumbing to peer pressure, turns her back on him when he gets bullied at school. The song, entered in the Pop/Top 40 category, was praised by the ISC judges for its powerful lyrical content and strong pop sensibility.

Candace Avery, the founder and director of ISC, states, “The song tugs at my heart and give me chills every time I hear it. Its theme is so personal yet universal that everyone can relate to it. That, combined with its infectious melody, makes the song a stand-out. This is the first time the Grand Prize has ever been awarded to Australian songwriters, and we hope this throws the spotlight on the extraordinary and creative music scene in Australia.”

The co-writers, Kate Miller-Heidke and Keir Nuttall, are not just bandmates and musical collaborators but also husband and wife. Strong songwriters in their own right, together they create a yin-yang of music that brings out the best of each other. Miller-Heidke is already a rising star in her home country, Australia. With her early training as an operatic singer, Miller-Heidke has evolved into a pop artist whose debut CD, Little Eve, went Gold. 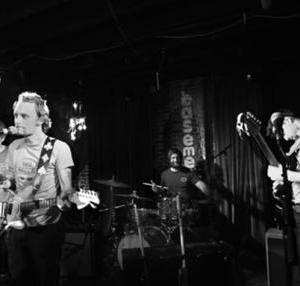