Bonnaroo is the closest many fans will get to a Woodstock experience. But if they closed their eyes and listened to Dylan LeBlanc’s set on Saturday afternoon, they just might have thought they were at the famed festival. The singer-songwriter rocked through a 45-minute set of bluesy Americana music that was reminiscent of decades past.

LeBlanc — who often draws comparisons to Neil Young — began the afternoon with a Young-like demeanor, addressing the crowd in a reserved and brief manner before getting down to business. The show began on a mellow note with “I’m Moving On,” a track that featured a lengthy cello solo from a member of LeBlanc’s backing band, The Pollies.

LeBlanc then moved into “Roll the Dice,” “Look How Far We’ve Come,” and “A Man Like Me,” three songs off of his new album Cautionary Tale. LeBlanc’s set rested almost entirely on songs from the record, which the Louisiana songsmith released earlier this year.

The singer-guitarist’s vocals were strong throughout the set, his smooth tone embellished with the occasional crack that can only come from passionate singing. However, it was difficult to understand his lyrics for much of the set, hindering new listeners from fully appreciating LeBlanc’s songwriting.

Nonetheless, the originally thin crowd grew substantially over the life of LeBlanc’s set, as people wandered over to the Who Stage once entering the festival grounds. The larger audience came alive during the latter half of LeBlanc’s set, which traded in subdued melodies for bluesy guitar solos. New tracks “Beyond the Veil” and “Easy Way Out” both featured edgy guitar solos that embodied the psychedelic-blues of the Woodstock era.

By the time LeBlanc closed with his record’s title track, “Cautionary Tale,” he had shed a bit of his reserved stage presence. LeBlanc jumped up and down with his guitar and shredded a solo to finish his set, reminding fans why it is that festivals like Woodstock and Bonnaroo began in the first place. The music.

Part of the Bonnaroo code is to “radiate positivity,” and Band of Horses did just that with their set on Saturday evening. Frontman Ben Bridwell established the show’s friendly tone before playing a single note when he addressed the audience.

“We’re called Band of Horses,” he said to an expansive crowd at What Stage, the festival’s main venue. “They asked us to come play music, so we will. Okay?”

He and the band then bounded into an energized set, kicking off with Bridwell wailing on the harmonica on “For Annabelle.” The group then moved into “Casual Party” and “Solemn Oath,” two songs from their new album, Why Are You OK, which was released only one day prior.  The new songs found Band of Horses playing a grittier sound of rock and roll, one that created a buzz in the audience for the first half of the set.

After twenty minutes, a group of fans unrolled a multi-colored parachute—in typical Bonnaroo eccentricity—and proceeded wave the recess toy to the beat of the songs. Bridwell noticed the fans mid-song, smirking as he played the track’s final chords.

The mood changed during the set’s halfway point, as the band swapped power chords for the delicate hit “No One’s Gonna Love You.” The group maintained the restrained mood for the next 20 minutes with a collection of older tracks that culminated with emotive renditions of “Is There A Ghost” and “The Funeral.” During the latter, the audience remained quiet at the beginning, listening to Bridwell and absorbing the moment before joining in on the vocals for a cathartic capstone to the band’s biggest hit.

Bridwell then grabbed a tambourine and drumstick, bringing back the upbeat energy to close the night with “The General Specific.” The crowd—still reeling from the string of hits that capped off the hour set—drowned out Bridwell’s final words with their screams. Looking out into the crowd, Bridwell blew a kiss and left fans to welcome the night’s headliners with smiles on their faces. 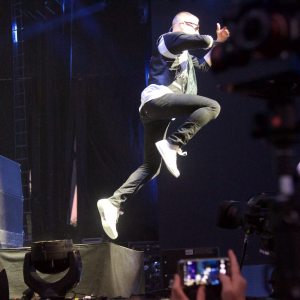 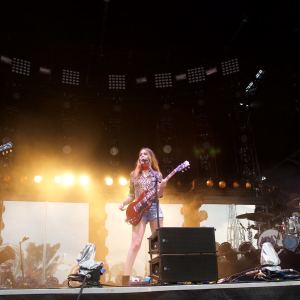