Los Angeles-bred band of sisters Haim took the stage Saturday evening to a packed and enthusiastic crowd, getting the ball rolling with “If I Could Change Your Mind” and “Save Me” before playing a high-energy cover of Prince’s “I Would Die 4 U” to pay tribute to the late popstar. After sailing through “Forever,” the trio played two new songs, “Give Me Just A Little Of Your Love,” which sounded more like a rock cover of a Wilson Phillips love song than an original composition, and “Nothing’s Wrong,” which touched upon a relationship falling apart before the narrator’s eyes. “How could you do this to me, baby?/How could you tell me nothing’s wrong?” Both were well received by the audience, particularly the second.

Halfway through the set, the band addressed the crowd, calling upon fans to use the next song as an outlet to work through some anguish. “We got fucked over by some person, so when you sing this I want you to sing your heart out to whoever you’re singing about,” announced youngest sister Alana Haim as the band powered into “My Song 5,” a dark, pulsing track about a painful heartbreak. They then asked the audience to participate in a call and response chant for an energetic hit “The Wire,” which had fans dancing and even less enthusiastic spectators getting up off of their blankets to join in.

The show ended in an odd way, with the sisters playing “Falling” and immediately launching into a several minute drum solo that ultimately led to nothing. It was a disappointing and ineffective way to direct the massive amount of energy that had been built up over the course of the set and left listeners with a sense of dissatisfaction as they walked away from the stage. Luckily, no one had much time to dwell on it, as all festivalgoers were quickly evacuated to their cars to escape a lightning storm. 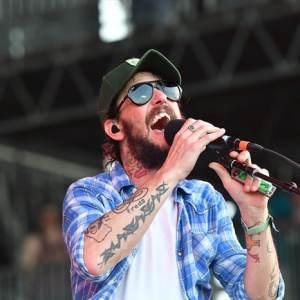 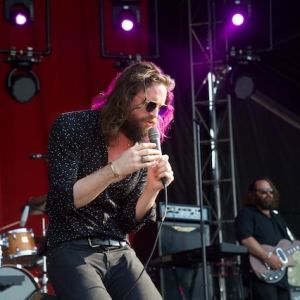