Once Annie Lennox and Dave Stewart parted ways with their post-punk band, The Tourists, in 1980, both continued on and needed to find a band name that defined their sound, and movement, and one that would pique some curiosities.

Eurythmics, which was also spelled as eurhythmics, referred to a late 19th century learning exercise Lennox had encountered as a child where music was taught through movement and dance.

Once the band name was in set, Stewart and Lennox, who were no longer a couple, decided to remain a duo and the chief songwriters and band members of Eurythmics “on the basis of mutual compatibility and availability.”

For the duo, the name embodied their artistic experimentations and eccentricities that would later become visualized around the boom of music television (MTV) lending a portrait to Eurythmics’ electronic jumble kraut rock, post-punk, psychedelic pop.

The duo released their 1981 debut, In The Garden, and more synth and drum on the follow-up Sweet Dreams (Are Made of This), with the release of their first hit, the title track. For Sweet Dreams, Stewart worked out more of the productions, experimenting with different sounds using wineglasses filled with water, while recording in the basement of a London timber warehouse. Once released in the U.S. in 1983, the title track topped the charts and the voices were now visible on MTV with a stoic Stewart and gender-bent Lennox adding more mystery behind the band and the name Eurythmics.

That same year, they released another album, Touch, with hits “Here Comes the Rain Again” and the gender-bending “Who’s That Girl?” They continued to make music as Eurythmics, releasing eight albums, including their fourth album, Be Yourself, with an Aretha Franklin duet on “Sisters Are Doin’ It for Themselves” and Revenge in 1986 with the singles “Thorn in My Side,” “When Tomorrow Comes,” and “Missionary Man”—which earned the duo a Grammy for Best Rock Performance By A Duo Or Group Vocal.

A decade after releasing their seventh album, We Too Are One, Eurythmics came to an end with their final release, Peace, in 1999.

More than 40 years after forming, Eurythmics were chosen for induction into the Rock and Roll Hall of Fame in 2022. 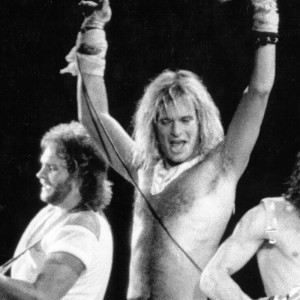