Check out our photos from Saturday and Sunday at the Bonnaroo Music and Arts Festival in Manchester, Tennessee, including Wilco, Jenny Lewis, Tony Rice, Todd Snider, Erykah Badu, Andrew Bird and Band of Horses.

Highlights from Saturday at Bonnaroo, the four-day Music and Arts Festival in Manchester, Tennessee, included Nils Cline shredding on his Fender Jag on the main stage in Wilco’s opening slot for headliners Bruce Springsteen and the E Street Band.

We caught the end of The Tony Rice Unit, when he brought out David Grisman (who was up next on the Tennessee Shines-sponsored The Other Tent on Saturday). Grisman and Rice seemed to be reflecting on mutual friend Jerry Garcia as they picked the old-timer “Shady Grove.”

J. Lewis and Jonathan Rice singing about the sun, keeping the sun out of their eyes.

Wilco taking down the main stage on Saturday evening.

Todd Snider had the 2pm slot on Sunday at This Tent. He played songs off his new record The Excitement Plan and entertained the crowd with stories about growing up in Oregon.

Erykah Badu on What Stage on Sunday.

Andrew Bird getting in touch with his violin. Bird seemed to be having just as much fun as anyone at Bonnaroo.

Ben Bridwell of Band of Horses letting it loose on Which Stage, Sunday evening.

Band of Horses was one of the last acts to play at Bonnaroo. They played a reflective set that included a cover of Gram Parson’s “A Song For You” and a two new songs as encores, including a beautiful song with a Beach Boys-esque melody written by guitarist Tyler Ramsey. 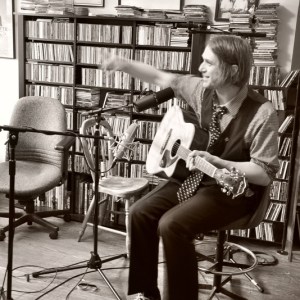