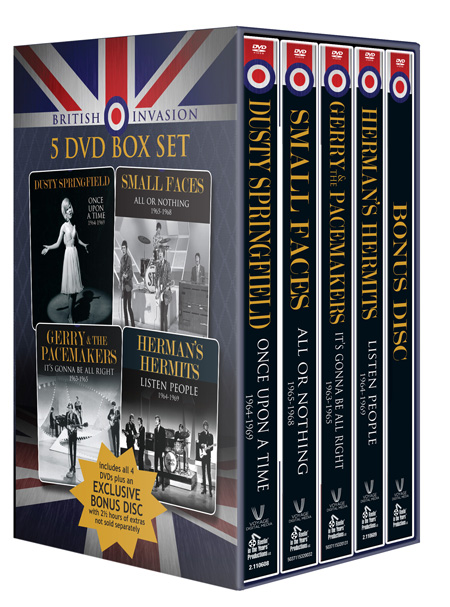 (VOYAGE DIGITAL/REELIN’ IN THE YEARS)

This set boxes the first four offerings (also sold individually) in a very promising new series of DVD documentaries chronicling artists of the 1960s British-pop explosion that sheds light on the subject, without the typical nostalgia exploitation. Each DVD—one each on Dusty Springfield, Small Faces, Herman’s Hermits, and Gerry & the Pacemakers—includes fresh, intelligent interviews with the performers or their surviving associates, carefully selected archive reports, and twenty-plus uncut, uninterrupted performances of the acts at their peak. The gifted and mysterious Ms. Springfield’s disc is the most consistently compelling, but at least as revealing is that on the Small Faces, a highly innovative, forward-looking band relatively unseen and under-appreciated in the U.S. though it included later stars Ronnie Laine, Steve Marriott, Ian McLaglen and Kenny Jones. The teenybopper idol Peter Noone’s Hermits did get a surprising share of strong songs from the likes of Carole King and P. F. Sloan. A box set bonus disc provides an additional hour of Dusty and Hermits performances, and interview footage deleted from the four discs.