It’s hard to imagine too many bands being more influential and impactful than R.E.M. were over their magnificent career. Granted, alt-country might not be one of the genres that springs to mind when you think of the band. Yet their early gem “(Don’t Go Back To) Rockville” sounds like it could have been the blueprint for many Americana hits released a few decades later.

The band’s habit was to credit all four members as songwriters for their recorded output, regardless of who actually did the bulk of the writing. In actuality, “Don’t Go Back To (Rockville),” which appeared on the 1984 album Reckoning, was composed by Mike Mills. Mills spoke to American Songwriter about the winding road the song took to its inclusion on the album and, eventually, classic status.

He first wrote it in 1980 in the earliest days of the band. “I remember sitting at the kitchen table on Little Oconee Street in Athens, (Georgia),” Mills explains. “There’s a turnaround in the song that’s inspired by part of a Simon & Garfunkel song (“Mrs. Robinson”) that I heard, and I started building the song around that. Sometimes the first line is the hardest line and once I got that first line (‘Looking at your watch a third time/Waiting in the station for a bus’), the rest of it flowed naturally.”

As the band approached the follow-up to their highly-acclaimed 1983 debut Murmur, they understood that all eyes, and ears, would be on them. “We were well aware of the sophomore jinx,” Mills says. “That’s why we titled it Reckoning. Most bands and songwriters, they have a lot of time to write their first record and then don’t have that much time to throw together the second one by the time the record company wants to put it out. But we were all (Mills, Michael Stipe, Peter Buck and Bill Berry) really prolific songwriters and writing pretty quickly. We were just together all the time writing songs; that’s we did. So we knew we would have a quality record coming out. We just didn’t know how it would be received.”

There was so much quality, in fact, that it looked like “Rockville” would get passed over for inclusion, at least until a last-minute stylistic change that was done as a lark. “It was originally written really fast like a Ramones kind of punk rock song,” Mills recalls. “We slowed it down as a humorous nod to our manager Bertis (Downs), who really loved the song. We slowed it down and countryfied it just a little bit. It went from a Ramones vibe to a Gram Parsons/Byrds vibe, and it was interesting. As I recall, it might not have been high on the list because it was so punk rock-y. Once we recorded it, we really loved the way it turned out and it became quite obvious it needed to go on the record.”

As for the lyrics, Mills took some artistic license with a real-life incident. “There was a girl (Ingrid Schorr). We were seeing each other and we really liked each other, but we were not boyfriend and girlfriend. She was going back to Rockville for the summer. And I thought that ‘going back to Rockville’ just screamed song, right there. As I wrote it, it turned into what if we were in love and she was leaving and never coming back. And that’s how it turned into ‘(Don’t Go Back To) Rockville.’ It just morphed as it went along.”

The narrator suggests Rockville, Maryland is a place “where nobody says hello/They don’t talk to anybody they don’t know.” He also relates his need to drink his heartache away: “Cause it’s so much easier to handle/All my problems if I’m too far out to sea.” But he also owns up to the fact that her return might not be as good for her as it would be for him: “If you were here, I’d only bleed you.”

In the chorus, Stipe, who sings lead, is joined my Mills and Berry as they belt out the title phrase. About the vocals, Mills says, “I’ve done that song a lot. I’ve done it at all sorts of charity things outside of R.E.M., because everybody really loves that song and wants to play it. We always did the harmonies with these other musicians as three-part harmonies from the beginning of the chorus. In other words, once you start singing ‘Don’t go back to Rockville,’ you’re in three-part harmony.”

“And then I went and listened to the record, and it’s not in harmony until you get to the word ‘Rockville.’ It’s unison for the first few words ‘Don’t go back to’, and then on ‘Rockville’ it breaks into three-part harmony, which is really powerful. So I have switched it around when I do it with other people.”

Typically, when a songwriter writes about an actual person, there isn’t an answer back. But Ingrid Schorr turned out to be a successful writer of her own, and she once penned an online piece about the surreal experience of inspiring a song. And Mills loved it: “I think it’s wonderful. Ingrid is still a dear friend of mine, and she is a super-smart person and a very sweet and lovely person. And I’m just thrilled that she’s OK with it. I didn’t say anything bad in the song and it wasn’t anything to be ashamed of, but I didn’t know if she’d enjoy the notoriety or not. But she does.”

Mills didn’t imagine when he wrote “Rockville” that it would enjoy such longevity. “I felt like it was catchy and a lot of fun to play,” he remembers. “But I did not know that it would resonate. Some songwriters know. When Bruce Springsteen was writing ‘Born To Run,’ he knew he was writing an epic. He wanted to write an epic and he did. Me, at that point in my life, I’m just trying to get a song out that makes some sort of sense.”

“I do remember sitting at that kitchen table and writing it and being kind of excited about it. Certainly not in the sense that I’ve written a timeless classic. But in the sense that, wow, I’ve written a catchy song. And I remember thinking that I was happy with the song. You don’t always feel that when you write a song. You write it and it’s finished and you’re still unsure about should I even have bothered with this. But with this one, I felt pretty good about it.”

When it was released as a single in 1984, “(Don’t Go Back To) Rockville” did not become a hit, in part because R.E.M. was still more of a word-of-mouth, critical sensation at that point. Mike Mills is OK with that, considering the tradeoff is that the song is regularly listed among the best R.E.M. ever recorded. “You just never know what kind of life these little buggers will have once you turn them loose on the world,” Mills laughs. “We liked putting out singles, because we liked singles. Peter and I collected singles. We thought if college radio played it, that’s as far as it will ever go, and that’s all fine too. The fact that it has endured is gratifying. It’s a nice feeling.” 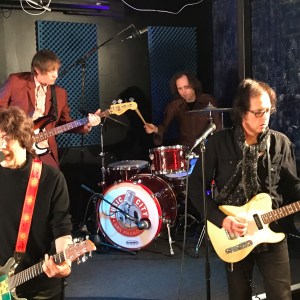