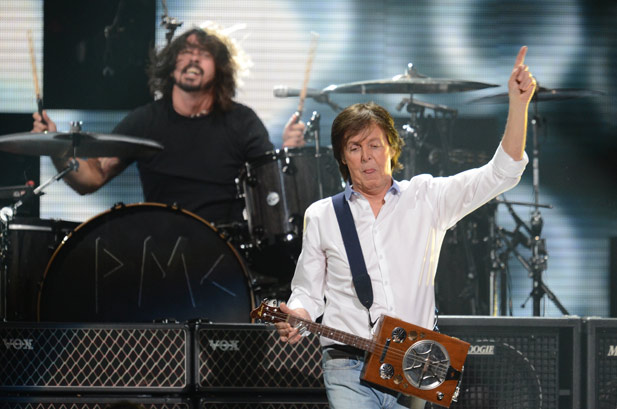 On a night that had The Rolling Stones sandwiched in between acts like Eric Clapton and The Who, it was hard to say who was going to stand out. Here’s five performances from the 12-12-12 Concert For Sandy Relief that rose above the rest.

1. Bruce Springsteen and his disciple Bon Jovi teamed up for a historic run through of “Born To Run.” The two Jersey titans later shared the mic for “Who Says You Can’t Go Home” during Bon Jovi’s set.

2. Eddie Vedder will eventually sing with all of us. It’s one of the promises of rock and roll. Tonight, it was Roger Waters’ turn to have a duet with the Pearl Jam front man, who brought his trademark emotional warble to Pink Floyd’s “Comfortably Numb.”

3. New Yorkers and the Bard of Long Island Billy Joel have a special bond. Joel was in a New York State of Mind during “Miami 2017 (Seen The Lights Go Out On Broadway)” his epic tale of drama in the five boroughs, which he updated to include references to Hurricane Sandy.

4. Remember that time when Michael Stipe and Mike Mills joined U2’s Larry Mullen Jr. and Adam Clayton for a stirring acoustic rendition of “One?” This was in the same spirit, only it was Stipe coming out of retirement to sing his own biggest hit, “Losing My Religion,” while Coldplay’s Chris Martin strummed along and added harmonies. Best open mic performance ever.

5. There are more similarities to Nirvana and The Beatles then are immediately obvious. Which is probably why this electrifying pairing of Paul McCartney and the remaining members of Nirvana sounded so natural.Their new, jam-inspired song “Cut Me Some Slack” rocked like a souped up “Yer Blues” or “Helter Skelter,” and it was great to see Dave Grohl bashing the drums again. As one fan tweeted, “I’d love to hear the conversation between Kurt and John in heaven right now.”

By the way, what did everyone think of Adam Sandler’s “Hallelujah?” Let us know your thoughts on the show in the comments.