If you haven’t turned your ears to the middle of our fair state in the last few years, then you’ve probably missed some of the best rock music you’re likely to find anywhere. “Whatever, man,” you say. “I’m with it. I know Nashville’s a rock town now ‘cause Jack White moved there and Kings of Leon won a Grammy.” Maybe, but the truth is that if you left Chattanooga and drove to Nashville looking for great music, you’d have driven about thirty miles too far. Thanks in part to the energy spilling over from MTSU’s Department of Recording Industry, Murfreesboro has fast become one of America’s most exciting music towns, giving rise to many of the regions most innovative groups. At the heart of that buzz is Glossary, who for the past 15 years have dedicated themselves to making music in Murfreesboro and making it right. Their sixth studio album, Feral Fire, takes its name from Cormac McCarthy’s The Road, and with this latest effort, the band is, to borrow from McCarthy, poised to “carry the fire” through Middle Tennessee and beyond.

“Blood on the Knobs,” the final track off the band’s 2007 release, The Better Angels of Our Nature, was a defiant, all-in affirmation of a life spent dedicated to music. “I’m still holdin’ on to rock and roll,” claims lead singer Joey Kneiser, and despite the realities inherent in being a small Tennesee band, Kneiser and company have made good on that pledge. Feral Fire not only holds on to rock and roll, it embraces it, wrestles with it, and shapes it to its will. It is that malleability, perhaps, that makes these songs so appealing. The band’s range and dexterity are evidence of what fifteen years of likeminded focus and dedication can do for a band. As the album’s title might imply, these are smart folks you’re dealing with, too, and the subtlety of words is not lost on them. To call something feral is to say it is wild, and the album is certainly that—it leaps shamelessly from Thin-Lizzyesque jumpers like “Lonely is the Town” and “Save Your Money for the Weekend” to pedal steel-soaked alt-country sweetness in “Your Heart to Haunt” and back to the unabashed, fist-pumping rock of “Bend With the Breeze” and “The Natural State.” If the latter doesn’t make you want to hop in your car and head towards Arkansas, check your pulse.

But to be feral is more than simple wildness, it also implies a natural, unsullied state of being, and that perhaps is what this album says best about Glossary; it shows a group at peace with who, what, and where it is. There is an undeniable cohesion and comfort between its members. Joey Kneiser’s intricately crafted lyrics, Kelly Kneiser’s ethereal harmonies, Todd Beene’s steel and lead guitar, and thunderous rhythms of bassist Bingham Barnes and drummer Eric Giles all blend seamlessly, naturally. Glossary have created something special with Feral Fire, and they hope the fire spreads, but a close listen to any of its songs will tell you that if it doesn’t, Glossary will still be “holding on to rock and roll” anyway. 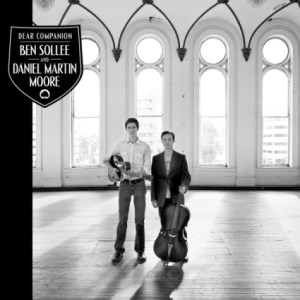