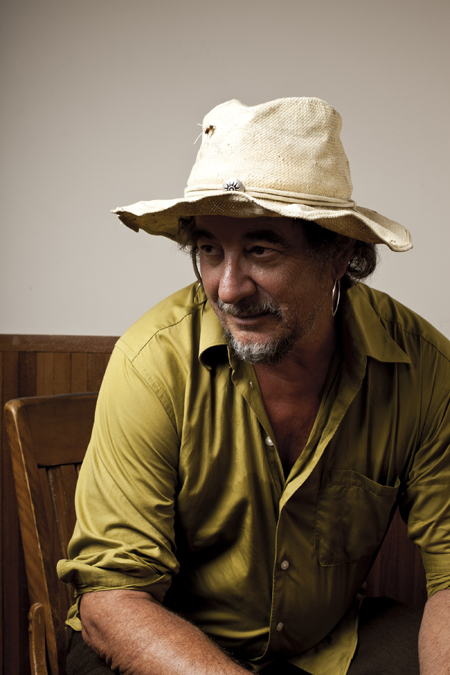 Greg Brown’s conversational cadences are remarkably similar to the sort his characters use in his songs. The term wry comes immediately to mind. But also, weary, stoic, resigned. And, whether you’re referring to Brown’s profundity, or the actual timbre of his voice? The cat is deep, too. Sure, he says, smart, acute things. But he also utters them in a basso profundo that could rattle the teacups in your next door neighbor’s china cabinet. Think that dude from Crash Test Dummies, but with a rural bent and better choruses. Brown’s new album, the darkly-beautiful Freak Flag, has a fistful of such songs. Their gestation may have been lengthy. The recording process, Kafka-esque. But the man has wrested a small masterpiece from all the chaos.

“Yeah, I lost the first version of the album,” says Brown, with the measured calm of a man who’s lost worst things in his life. “We made the first version in St. Paul. The thing was done. But there was a storm and the power went out. I don’t know all the technical stuff, but there was no external hard drive or something and all the songs just vanished. You can choose to laugh or cry about that kind of stuff, you know?”

Brown chuckles, as if to illustrate how he dealt with his spare, folkish tunes getting sent into the ether. With only one song left from those three days of recording, he wrote a whole bunch of new ones (the title track is all that remained from the original), then went to Memphis and made another record. The new, improved Freak Flag, redone at Ardent Studios in Memphis is smoky and swampy, one minute reminiscent of a slow Al Green jam, the next full of the deep sadness and felicitous detail of a country album. It’s hard to imagine anyone whose 24th album could be their best, but that may be the case here. From the sardonic shuffle of the title tune (a sort of hippie State of the Union address) to the slow-grooving “Mercy, Mercy, Mercy,” Brown has fashioned a snapshot of our disjointed democracy, that shows us in various poses of spiritual unease. Big dogs are eating too much, while little dogs starve. Folks are hiding their true natures in hopes that homogeneity will save them. And then things get really bleak. “I don’t think we have Democrats or Republicans anymore,” says Brown, in a voice that rattles with authority. “We just have lobbyists. The congress has pretty much been bought and paid for.”

Brown also managed to coax lovely songs out of both his daughter Pieta (“Remember The Sun”) and wife, Iris Dement (“Let The Mystery Be”). If the album’s conceit is that America is one big dysfunctional family, well sir, Brown’s real family creates songs that seem to give him hope. The kind he needs to carry on in the midst of all this American madness. Not that there weren’t some worries about recording the tunes of these beloved women. “I love both those songs, but recording them made me nervous as hell. I was really worried how both my wife and daughter would react. Luckily, they were pleased. You don’t want to screw up your family over that sort of stuff.”

Brown’s regard for his wife extends to the fact that they don’t sing together. Not onstage. Not in the studio. Credit the guy’s unpredictability for that. “Iris says she just can’t sing with me. It’s simple, really. She told me she likes my voice, but I never sing anything the same way twice. I’m incapable of it. And she can’t deal with it. She can duet, with, say, John Prine, because he’s sings pretty consistently, but that’s not my strong suit. So, just as Iris and I go out and tour separately, we also don’t perform together. It seems to work well for the relationship.”

As pleased as he is with his shiny new disc, Brown is keeping his expectations low about Freak Flag’s fate in the brave new world of the music biz. “I’ll do some dates to promote it, but my touring days are over,” he says with a sort of, oh, enlightened laziness. “I’m not sure how much promotion even affects sales anymore.” But then, this country-realist, this hard-boiled Iowan, cracks an audible smile. “Still, a couple of years back, I thought, ‘You know, I’ve made enough records. Maybe I’m written out. After all, my last one came out about six or seven years ago.’ Then, I started to slowly get some ideas, and eventually, I had a new one. Losing the first version of the record was kind of a drag. But it forced me to write more stuff. Then, the accident of being able to record in Memphis? Well, that really cinched it.” Brown pauses and thinks for a second.

“So, who knows?” he asks. “Maybe I’ve got another album or two left in me, yet. I’m starting to think that that’s an actual possibility.”