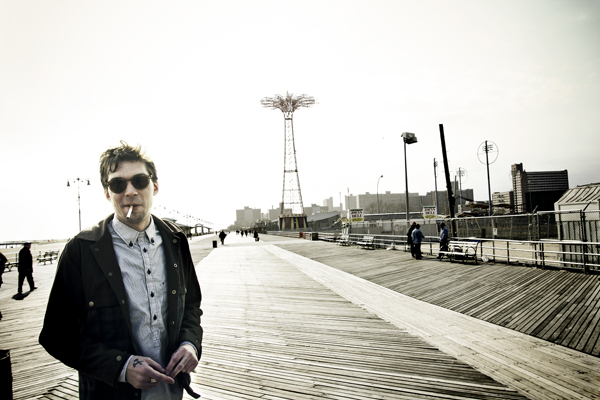 “I hate to break it to everybody, but I’ve been running my whole goddamn life and I’ve been all over this world, and you can’t outrun where you’re from and who you are.” Not even thirty years old, Justin Townes Earle has already lived a complicated life, one informed by the legacy of his famous father and by the perils of recurring drug abuse. However, he has managed to parlay his hard experiences – which he admits are most likely far from over – into tough-minded, emotionally frank, musically adventurous Americana tunes.

Earle is still running, but he insists it’s to see the world, not escape it. That’s the reason he’s leaving behind his beloved Manhattan and planting stakes in London. “I’ve toured Europe for the past twelve years, at least once a year, and I’ve been to every major city,” he says. “But I’ve never been able to spend much time there.” London offers a bit of freedom: “It’s about being able to go to Marrakesh or Barcelona on the weekend. It’s about being able to get a cheap ticket to fly wherever you want.”

Earle thrives on scenery – on the specifics of geography and the notion of place – and many of his songs allude either to locales or to the journeys in between. “Location definitely plays a part in my songwriting,” he says, “because that’s what’s swirling around me all day, giving me the input that creates my output.” That folksy transience has defined his small but intense catalog: In four years, he has released three solo albums, an EP, and a handful of one-off tracks here and there. In a short time, he has managed the seemingly impossible task of extricating himself from the shadow of his famous father (yes, Steve Earle) and establishing himself as a distinctive artist with his own sound, his own concerns, his own conflicts.

Earle’s most recent album, 2010’s emotionally tumultuous Harlem River Blues, was inspired by New York City, which Earle (as well as his father) has called home for several years now. It opens with the gospel-folk incantations of the title track, which show him walking up the FDR Drive to immerse himself in the river. Despite the style of music, his intention isn’t baptism and rebirth, but suicide. “I’m taking no chances, carrying over while I’m still good in His grace,” he sings defiantly. “I’m no fool, mama, I know the difference between tempting and choosing my fate.”

Over the course of the album, he visits a gloomy brownstone in Brooklyn, wanders into rowdy bars on the East Side, and haunts the dank subway tunnels of the MTA, then ends up a thousand miles east, in the Rogers Park neighborhood of Chicago. Harlem River Blues was mostly written on the road, from the point of view of a man missing his home – not just his Manhattan apartment, but the noise and the music of the five boroughs. “I was tracing the roots of what my dad called the hillbilly highway up to the big city, and paying my respects to Woody Guthrie and the Carter Family and the Staple Singers, because I was working with different kinds of gospel and how they moved across the country, back and forth across the state of Tennessee, then up to New York City.”

It’s not simply the particulars of place that inspire Earle’s music. The history of the place – its people, its music, its story – are perhaps even more crucial. He’s a pop music historian in the guise of a musician, and his songs shoulder the weight of the past easily and even gracefully. Just as he is interested in the trajectories of southern music throughout the twentieth century, he is also keenly intrigued by the various combinations and mutations of regional strains and style. To call Earle a country artist would be criminally reductive: His music bristles with gospel fervor, folk rumination, ragtime rhythms, rural and urban blues picking, bluegrass energy, honkytonk strut, jazz improvisation, R&B intensity, and soul integrity. He’s no mere revivalist, primarily because he doesn’t see these traditions as needing his help. “You remember when Woody Guthrie was around, he wrote about what was around him,” Earle explains. “He wrote about all these amazing new inventions, like the Grand Coulee Dam. He was taking an old form of music that he had learned in Pampa, Texas, and was translating it to a modern time.”