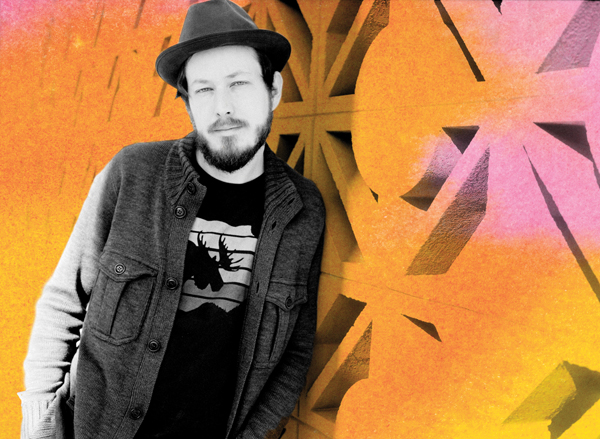 “Vetiver as a name is just what I call the songs I write,” says Andy Cabic. “This album was seeing how far I could stretch the arrangements and sound and still have it feel like Vetiver.” Cabic says he’s always loved ‘80s bands like Rain Parade and The Go-Betweens, as well as early REM and the 4AD bands. “That’s what I was raised on,” he says of the ‘80s and early ‘90s era of jangly electric guitars. Cabic says a lot of what he listens to these days is ambient and electronic music. “I was trying to find a way with these songs that I could bring that in and it would be both a departure and sound very familiar.”

For The Errant Charm, Cabic went down to Los Angeles to work with co-producer Thom Monahan. What began as an informal project quickly turned into the next Vetiver record. “I had a bunch of little pieces of things that weren’t finished and I played them for [Thom] and we started working on them. A couple days later, we had the making of a record.” The work went extremely quickly, and Cabic, who in the past has come into the studio with full songs written, says he let the sounds and arrangements take on a life of their own. “You add one part, one keyboard, one patch, and it totally changes the direction of the song,” he says. “Most of the basis of this record happened in three days. The process had a lot to do with that sound.” Lyrics emerged later, on walks around San Francisco when Cabic would listen to the demos. “One single word or phrase can stick and I’d build stuff around it,” he says. But Cabic also warns not to mistake the melancholy narrator for himself. “I always appreciate when songs have bummer lyrics but a really poppy tune.”

Song: “Fog Emotion”
“I wanted to write a song that was a summery anthem and I had a guitar part and put a beat on top of it. I essentially wanted it to sound and feel like … [laughs] “Steal My Sunshine” by Len. Or a song like “Keep On Moving” by Soul II Soul. Or a baggy Manchester song from when I was in high school. We took a loop of a drum beat and played everything on top of that. Otto [Hauser] played drums on top of it and we removed the sample. It started with layers of acoustic guitar that we got rid of. Like a sketch that we would paint on top of and then the sketch is erased. We wanted to find a vocal sound where the lyrics were not expressly audible so you have to peer into the song to hear what I’m saying – playing on the idea of the title and audibility of the sounds. Everything in that song, you can hear it very clearly, but you also have to listen for it too. It’s audible but not exposed.”

Cabic took advantage of Monahan’s keyboards like a vintage Roland Juno, Novation Supernova, Korg MS10, and Hammond organ. He says he owns a few drum machines and they also used some Reason patches in addition to the Hammond Auto-Vari 64 and Roland CR-78, which Cabic also affectionately mentions you can hear at the beginning of Blondie’s “Heart Of Glass.” To boost the sampled drum sounds, Cabic and Monahan would reamp the drum machines into another room to make them sound bigger. Later on, the rest of Vetiver joined Cabic in an East Coast studio and fleshed out live instrument parts like drums, bass, more guitar and keyboards. Cabic says he and Monahan always record more than they need, and peel back the layers and mix as they go.