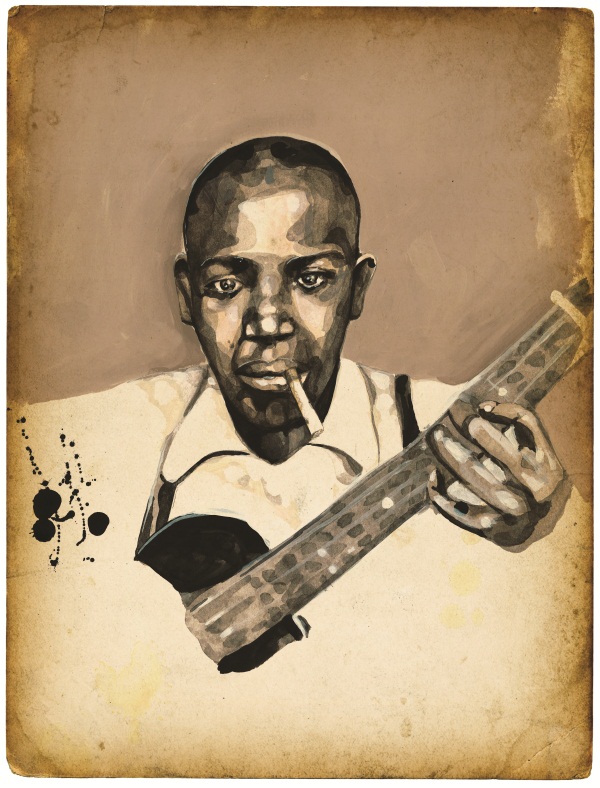 Robert Johnson probably played whatever guitars he could get his hands on. Johnny Shines, one of Johnson’s traveling companions in the mid ‘30s, said in interviews before he died that Johnson liked the Kalamazoo guitar, a budget brand made by Gibson, and also Stella guitars.

In the first photo the world saw of Johnson, discovered in the late ‘70s by Steve LaVere and published in Rolling Stone magazine in 1986, the guitarist sits for a photo booth self-portrait, a cigarette dangling from his lip, a Kalamazooo KG-14 flat-top guitar in his hand. Zeke Schein, who works for Matt Umanov Guitars in New York City, says the identifying features of the KG-14 are “14 frets to the body, five dot markers, a single layer of binding inside the sound hole, and a black ebony nut.” This photo, about the size of a postage stamp, has often been thought to have been taken in the early 1930s, though Schein points out that, according to Gruhn’s Guide To Vintage Guitars, Gibson didn’t begin production on the KG-14 until “the fall of 1936.”

The KG-14 is thought by some blues enthusiasts to be the guitar that Johnson played during his recording sessions. Johnson’s first recording session took place in San Antonio, Texas, on November 23, 1936. If he played a KG-14 at this session, it would have been brand-new at the time, having just gone into production.

According to a 1961 letter from Columbia Records’ producer Frank Driggs (who was compiling notes for the label’s first Johnson LP, King Of The Delta Blues Singers) to producer Don Law (who recorded Johnson in San Antonio) Johnson was arrested on Monday night after his first day of recording and put in jail. When the session resumed later in the week, Law had to borrow a guitar for Johnson to play. It’s probable then that the guitar heard on “Kind Hearted Woman” and “Sweet Home Chicago,” from the first day’s session, is different than the guitar he used to record “Cross Road Blues” and other songs on Friday, November 27. Of course, no one ever thought to ask Don Law (who died in 1982) what guitar Johnson played that week in San Antonio, or at his second and final session less than a year later in Dallas, Texas.

But in another photo of Robert Johnson, taken at the Hook Brothers studio in Memphis, the Hazlehurst, Mississippi-born musician is holding a 1929 Gibson L-1. Schein says you can tell from “the seven dot markers, an unbound fingerboard, and slanted ‘The Gibson’ logo.” This is the first full-body shot of Johnson, also discovered by LaVere. (Another photo of Johnson and his nephew from this same photo shoot is believed to exist.)

Ren Ferguson, Gibson’s master luthier, says the L-1 in the photo is probably a “studio guitar, not the guitar he actually played.” In 1994, Gibson licensed the guitarist’s name and began producing a Robert Johnson Signature L-1. Ferguson and his team tested a number of L-1s from that era, but ended up making a few modern updates to the original guitar style. Johnson’s L-1 would have been latter-braced, says Ferguson, while now they use X-bracing to give the guitar more clarity and balance.

On the guitars that Johnson and other bluesmen in the ‘30s were playing, Ferguson says, “The notes decay really quick, which is part of what we hear on those old recordings.”