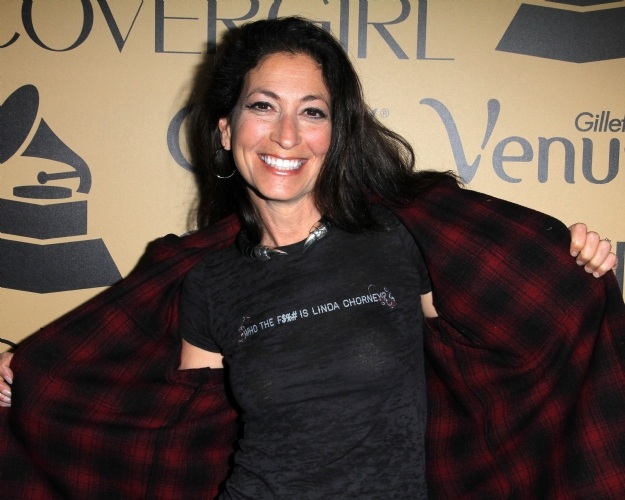 Chorney used the Grammys’ social networking site Grammy365 to reach out to judges and ask them to listen to her independently made album, Emotional Jukebox, which includes introspective originals, a symphonic piece, and her versions of songs by Led Zeppelin, The Beatles and The Rolling Stones. The judges liked what they heard enough to vote her in, and now Chorney has the possibility of being the first person to win a Grammy without ever having an album on the charts. Her nomination set off a firestorm of protest from industry insiders, prompting the good-humored New Jersey native to create a t-shirt that reads, “Who the *&*! is Linda Chorney?”

We chatted with Chorney on the Friday night before the Grammys about her chances, hanging with Bruce Springsteen, and what she might say should she win.

How’s it going? Are you pretty nervous?

I’m feeling great. I think I was more anxious the whole month, and now that I’m here, the reality is sinking in. Before I had this inkling of hope that maybe I could win this thing, and now I’ve come to the reality that being nominated is cool, and I definitely don’t expect my name to get called. The pressure’s off.

Will the Americana category be televised?

It’s going to be on during the day. They’re actually going to have the entire thing online during the day. You can tune in. If you’re a betting man, I would go to Vegas and bet against me and make some money. The odds won’t be very good. If you vote for me, the odds will be better, but you probably won’t get paid.

You recently played the Light of Day charity event, where you went on right after Bruce Springsteen. What was that like?

My husband is a huge Bruce fan. It was a dream come true when he saw both me and Bruce on the stage together. He pretty much dies and went to heaven. And he eventually got to go on the stage too. Scott’s done; his life is complete now.

Did you and Bruce have any words?

I’ve spoken to him before. I met him a couple years ago at a different Light of Day function. This time, I talked to him backstage. I told him I’d pick up his trophy for him if he won because I didn’t think he was coming — because his Grammy nomination is for Best Packaging. And sure enough he said to me that he was coming, so I don’t get to pick up his package. He’s going to do it himself. He’ll probably win. At least one person from New Jersey will win.

When I finished my performance, he walked by me, gave me a thumbs up and said, “You did good, kid.” So, that’s pretty cool. He’s awesome, and he looks amazing for his age. And Light of Day Foundation is fantastic, a really good cause. They raise a ton of money, and Bruce is a big part for being responsible for a lot of people showing up and paying.

Is music your full time gig, or do you have another job?

It’s been my full time gig for 25 years. I actually make a living at it — until I got nominated. Now I’m spending more. That’s kind of ironic. You have to pay for the publicist, the radio promotion guy, and I had to make a thousand copies of the album just to send to radio people, and then the postage between here and the United States — we’re looking at ten grand just for that. Most people have labels help them with that, and it’s just me. I’m making an investment.

If you were going to point someone to a song on Emotional Jukebox that best represents you, what song would you pick?

It’s kind of a tough question because they’re all my kids, but I’d say “Cherries,” “Do it While You Can,” and  “AWO” “Cherries” is just very autobiographical and goes through the circle of life, and I’ve lived quite a while. The cool things about that song is it allows everyone to take their own trip on their own life. I think that songs represents me because I think a lot. I think too much. That would be number one.

I’d give it a tie between “Broken Promise Land” and “AWOL” because they’re both not so optimistic songs. They’re more realistic songs about the world. For example, Bruce has a song called “The Promised Land,” which is a pretty positive song. It’s about hope. And my song is “Broken Promise Land,” because I think the world is a bit broken. I thin we’re screwing up the planet with pollution and all that kind of stuff.

My song “AWOL” is fairly political, so I would say that represents me as well, because I’m very anti-war, and the song is empathetic. It talks about how I don’t blame the the people that went AWOL back when we were fighting the Vietnam War, because I don’t think a lot of people had reason to go over and kill anybody that they don’t know. So, that song’s about that, and I would say I’m a bit rebellious and opinionated.

You have some covers on the record as well. Have you done that with past records?

No, and it was so cool because these are my heroes. I was weened on classic rock, amongst other things. My parents had amazing taste in music, so they played everything from the Beatles to Burt Bacharach to Bach in my house; in fact I did a symphony on the album as well. But I chose to cover Led Zeppelin, The Stones, and The Beatles because they’re the greatest, they’re just unbelievable. I thought this was my last album and I wanted to pay tribute to some of my heroes, and that’s why I put them in there. It was a pleasure recording those songs. I’ll probably do a couple more covers on the next album because I had so much fun doing it.

It’s slightly ironic that those are three British bands, and you’re nominated in the Americana category.

Yeah, it’s pretty funny, isn’t it? I’m American and fortunately, and you can quote me on this, the naysayers haven’t asked me for my birth certificate yet, so I’m pleased about that. I think I put an American twist on the British songs. I Americanized it.

We drove to L.A. from Arizona, and got stopped at the border. The border cops were like, “Are you American citizens?” And I said, “Yeah, I’m Americana. I’m in the Grammys. We’re going to the Grammys.” Of course, they’re didn’t know what the hell Americana was as far as a category, which brings me to another subject.

If I may say, I do understand why people are protesting for this Grammy award and that directly relates to the controversy of my nomination as well because there’s so many genres that they’ve crumbled now because the Grammys got rid of a few categories.

A lot of the categories they got rid of had to do with roots music, and therefore a lot of things were merged together. There is no “singer/songwriter” category. There’s no “folk rock” category. It’s just “folk,” or it’s just “Americana.”

I think Americana has become a mish-mosh of a whole bunch of stuff. They also got rid of a lot of ethnic genres that are just so beautiful, and combined them all together. I understand the frustration. I think Americana is a melting pot, just like America is. It’s a melting pot of genres. That’s the way I look at it. I happened to get melted in there, and I’m really fortunate to have been nominated.

Has this Grammy nomination controversy intensified or lessened in the weeks leading up to the Grammys?

I have no idea. I’m sure it’s still there, but I don’t care.

What’s the nicest thing someone’s said to you since you’ve been nominated?

There’s too many of them. One thing would be that I’m hearing from folks in my age group who’ve said that I’ve inspired them and given them hope to reach their goals, whether musically or otherwise. People who are musicians as well said I gave them encouragement as well to just keep going in music, but also people who do other kinds of jobs. Just because they’re in their late forties or fifties, doesn’t mean they can’t still pursue their dreams. That’s definitely one of the nicest things that have come out of that, that really touches me. Secondly, a lot of independent musicians saying, “You go, girl!” A lot of people cheering me on. It’s extremely touching, as well as having folks just digging the music.

A lot of people are critical of the Grammys, saying that they’re out of touch. Do you agree with that?

The whole evening show, I think has to do with money, and I think the day program has to do with music. That’s going to get me in trouble. In the daytime, you’ve got jazz, blues, classical music, folk, Americana. This is roots music. To me, that’s real music. I’m not much for the big production stuff. It’s amazing that they’ve clumped all those people together.

You’ve got Gregg Allman during the day, you’ve got Eddie Vedder, you’ve got Keb Mo, you’ve got Stanley Clark, You’ve got classical musicians. I’m excited to see these people and psyched that they’re in the daytime with me. I’d rather meet them than any of the pop stars. With the exception of Adele, because I think Adele is amazing. She’s got a killer voice and I totally admire her, and I’m rooting for her.

Have you worked on your acceptance speech?

I dream about it every night. I wake up in a sweat with a brand new one in my head. I’ve written it down. I’m sure I’m not going to have a chance to do it, but I better get crackin’, because I really have not concentrated on it for the past couple of weeks.

I’m going into the studio tonight, actually, to record a song. The producer is Robert Xeno, who produced another album that was up for the Americana category, but didn’t get into the final five. He reached out to me afterwords and said how much he really loved my album, and got behind it, and wants to record a song with me. Also, I’m not going to say who, but one of the producers of the five nominees came to my show last night and wants to work with me too.

Anything you’d like to say while you have the world’s attention?

That’s really well put, because I probably won’t have it after Sunday. I would say, indie artists –- you rock. Keep going. Join Grammy365, it’s a chance for your music to be heard. I also want to give a message to just the musicians that are playing in a bar or restaurant where you think nobody’s listening, and you just feel like you want to die because you’re stuck in this corner. I listen to those people, and there’s a lot of killer talent out there. My message would be, for those of you who are just people in a crowd, in a bar, in a restaurant, and there’s somebody playing up there, maybe pay attention, because that person might be the next Grammy winner.