When South By Southwest kicked off in 1987, it was all about music. But as Southby continues its move to converge the hydra-headed thing it’s become into one massive interactive-film-music-comedy-whatever conference (this, year, with astronaut Buzz Aldrin speaking, that even included rocket science), finding music one actually might actually want to hear has become more challenging. With EDM beats bouncing off downtown buildings (including those pricey, earplugs-required hotel rooms), teeming hordes of college kids trying to have too much fun and hustlers getting a little too pesty, sometimes you just want to find an oasis and escape.

And once again, our hero, Willie Nelson, rides to the rescue. Five years ago, Nelson began staging a festival on his Luck Ranch in Spicewood, just under an hour outside of Austin on roads lined with early-blooming bluebonnets. The site, which still contains the quaint set built for his 1985 film Red Headed Stranger, not to mention actual horses, turns into a little village with food trucks, bars, pop-up shops, livingroom-style indoor and outdoor seating areas, and of course, multiple stages. Which happen to feature some of the top roots music talents out there.

This year’s lineup, in addition to the host, included Margo Price, Ray Wylie Hubbard, Conor Oberst & Friends (with M. Ward and the Felice Brothers), Brent Cobb, Aaron Lee Tasjan, Parker Millsap, Shovels & Rope, Andrew Combs, the Deslondes and plenty of others. Dozens of area artists showed up just to hang and hear their friends. If they stuck around, they got to hear Willie jam with his kids, Lukas and Micah, each of whom also played with his own band (Promise of the Real and Insects vs. Robots, respectively.)

About 2,500 laid-back fans sampled beverages (included in the ticket price) or stood patiently in line to buy customizable merch or imprint their initials onto leather luggage tags provided by sponsor Southwest Airlines. Valerie June sang with country belter Price at one point; Paul Thorn brought the McCrary Sisters; and Aaron Lee Tasjan dazzled — even before he sang a note.

Tasjan loves sparkle and shine, apparently. His latest album is titled Silver Tears, and he’s been appearing in a variety of shimmery outfits like the one on its cover. Asked where he acquired the outfit he wore Thursday, he revealed he found the star-covered suit online for $60 and bedazzled it himself, filling in the stars with silver glitter paint. He wore it over a polka-dot shirt and handmade silver boots he ordered from Korea for $35 — $42 with postage (he has a similar pair in gold). Tied around his neck was a silk scarf bearing a map of Yosemite Park. He even held a cane with a pearl-bedecked handle. Tasjan obviously knows how to stand out in a crowd — or on a stage.

As cool as the Luck hang was, it was worth returning to town for the annual Grammy Block Party, sponsored by the Recording Academy’s Texas Chapter on the lawn of the Four Seasons hotel. The event featured performances by Los Super Seven, Randy Rogers Band and Bun B, and a tribute to Leon Russell by Hanson and fellow Oklahomans John Fullbright, Jesse Aycock, Paul Benjamin and Aaron Baylor, joined by Austin-based saxophonist Carlos Sosa.

Brothers Isaac, Taylor and Zac Hanson, who, according to legend, got their first record deal as kids after an impromptu appearance at South By Southwest, are about to launch a 25th-anniversary tour. But their performance at this event was prompted by their desire to pay homage to a major musical influence. Their dynamic eight-song set contained several of fellow Tulsa native Russell’s biggest hits, starting with “Delta Lady” and “Roll Away the Stone.”

“Leon Russell left a huge hole when he left,” keyboardist/vocalist Taylor Hanson said of the famed session player and bandleader-turned-hitmaker, who merged soul, blues, gospel and jazz with country, pop and classical idioms. “But he also left us a lot of songs that live forever. We’re really honored to get to try and just scratch the surface of what he left behind with those songs.”

Fellow keyboardist Fullbright sang lead on “Tight Rope” and “Stranger in a Strange Land,” his voice a perfect mix of grit and R&B groove. Isaac Hanson and Benjamin traded vocals on a rockin’ “Out in the Woods,” and Fullbright’s harmonica and Aycock’s Dobro gave a bluesy feel to “If I Were a Carpenter.”

Taylor, who came up with the tribute idea before Russell passed away in November, performed alone on the final tune, delivering a soulful, loving rendition of “A Song for You.”

“One of the things I wanted to say before I bastardize this next song is how important it is for us as artists to not coast,” Taylor said, noting that right up until Russell’s death, “Leon was always thinking about what was next. He was working on the next thing. He was writing a new standard; he was making plans … and that is really inspiring to a young that loves to create. All of us onstage tonight, we aspire to never put it on cruise control.”

Taylor, a board member of the Texas chapter, which includes Oklahoma, said he’ll be working toward getting Russell a Grammy Lifetime Achievement Award and encouraged others to vote in favor of that. 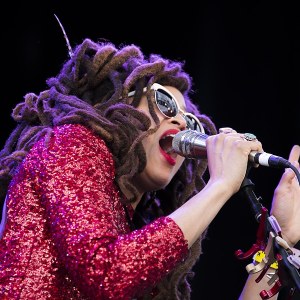 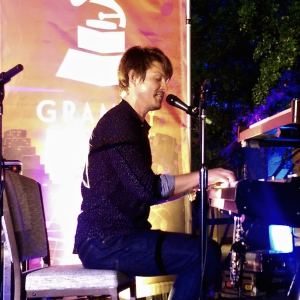