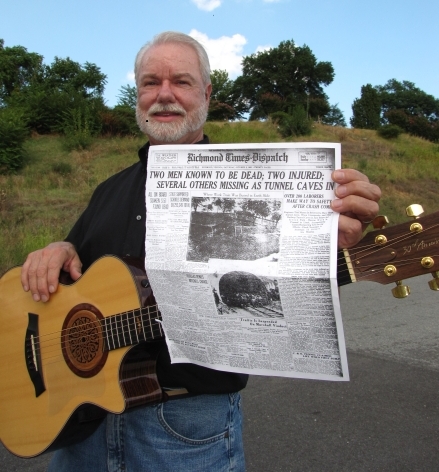 Standing before the entrance to the old Church Hill Tunnel, Lyric Contest Runner-Up Russell Lawson holds the 1925 newspaper account of the tunnel’s collapse.

Songs about riding the rails have proven to be worth their weight in solid country gold for scores of singers-songwriters over the years. Just ask David Allen Coe. And Cash. And Doc Watson. And The Hag. And Vernon Dalhart, whose 1924 version of “The Wreck Of The Old 97” holds claim to being the first million-selling country song in American music history.

Now, that haze of lonesome coal smoke has worked its magic for Russell Lawson of Richmond, Virginia, whose train-catastrophe-inspired lyrics for “Church Hill Tunnel” landed him a runner-up accolade in the Sept./Oct. Lyric Contest.

Lawson, 59, is a marketing professional by trade, but has been a musician and songwriter for his entire adult life. Of the 200-plus songs he has written during his lifetime, “Church Hill Tunnel” may have taken the most effort as well as time to complete.

The songwriting process actually began more than five years ago with a simple lyric (‘”moon of bone”) that was written down in one of Lawson’s notebooks. The true impetus for the song, however, happened almost a century ago. On October 2, 1925, burrowed deep under one of the oldest neighborhoods in America, an entire work train and several workers were entombed when the western end of the Church Hill Tunnel collapsed in Richmond, Virginia. News quickly spread around the region as rescue efforts were organized. Two of the trapped workers were able to crawl under the flat cars and escaped out the tunnel’s eastern end, but at least four workers remained missing. Two bodies, including engineer Tom Mason’s, were later recovered, but two other workers are still unaccounted for.

Lawson’s engagement in the tragic story began developing around 2004 after watching a television program where a crew reentered the now barricaded tunnel to reexamine the carnage. Not long after, his interest was piqued again when he came across a commemorative book of front pages from the local Richmond newspaper. One page, featuring the striking events of Oct. 2, 1925, immediately caught his eye.

“This story began to haunt me,” Lawson said. “It poked into my awareness in a way that I couldn’t shake off and I started to write this tune. I began to write notes and things that made sense about the story but I just couldn’t solve the songwriting problem for years.”

The song simmered on the back burner for a few years, until Lawson discovered a set of CDs of vintage Americana tunes, including one song written in a newsy, current events style. Lawson picked up his pen. He had found his “eureka” moment.

“Most of the people in the story escaped, so to get really inside the pathos of the story, I imagined what if I was in the family of one of those lost men? How would that have played out in my life? What kind of things would I have been exposed to at the time the collapse happened? I took the approach of ‘I’m a kid living in my hometown and my dad works on the railroad and all of a sudden he’s gone.’ What happens along with that?”

After incorporating a very simple C-G-F progression, which was “folky enough to fit the story,” Lawson was back on track. Eight hours of focused writing later, “Church Hill Tunnel,” the song he’d been laboring over for more than five years, was born.

Our Daddy worked for the C&O

He loved those trains and the places that he’d go

Richmond town was where we settled down

The only home we’d ever know

Twenty years he rode the lines of steel

As loader-brakeman, then as engineer

And hear his tales by candlelight

A moon of bones shines down on the tracks

Where Church Hill Tunnel has fallen in

And won’t be coming home again

When Mrs. Mason came around that day

The killer tunnel that ran beneath the clay

Had stole her Tom and Dad away

That Church Hill Tunnel claimed so many lives

The railroad sealed it so no one else would die 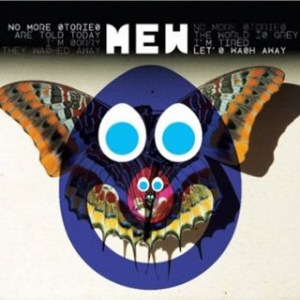