Matt Simons’ upcoming album Identity Crisis is a reflection of both his personal values and versatile musical style. In the six singles released from the album so far, Simons holds nothing back. He dives into his struggles with mental health and panic attacks, while still delivering a hopeful message for listeners. Identity Crisis features a wide range of styles, from upbeat pop tunes to stark recollections of Simons’ darkest moments. The full ten-song album is set to release on May 6, 2022.

In an interview with American Songwriter, Simons talks about the process of creating Identity Crisis, and why the deeply personal project has been so special to him.

In Identity Crisis, the “Catch and Release” singer shares more of himself than ever, and his honesty shines through on each track. While Simons’ first three studio albums were praised for his lyricism and ability to tackle a wide range of emotions, not all of the songs were about his own life. After releasing his last album, After the Landslide, in 2019, Simons knew that he was ready to put more of his own perspective into his music.

“A lot of times I’ve written from a storyteller’s perspective and not necessarily included my own experiences,” he tells American Songwriter. “I wanted to talk about my own struggles with mental health and go a little deeper into that area of my life.”

Several of the songs on Identity Crisis take the listener through the Simons’ mental and emotional journey with anxiety. “Identity Crisis” is about losing who you are and hitting rock bottom. “Self Control” is about learning how to take care of yourself and do what is best for your mental health, even when it’s difficult. In “Better Tomorrow,” Simons shares the advice he uses to get through panic attacks.

Through these songs, he hopes to show listeners how ugly these mental battles can be, but also that it’s possible to get through them.

Each track is drawn from Simons’ own experiences, and his honesty can be painful at times. One of the songs that best demonstrates this is “Better Tomorrow.” Simons wrote the song in 2016, but never felt like it was the right time to release it— until Identity Crisis.

“It’s definitely the oldest song from the album. I just knew that the production was never right, and I couldn’t figure out where to include it. I even sent it off to a couple DJs to get it remixed and it never really sounded right, so it just sort of sat there,” he confesses.

Even when he was confident that the song was ready, his label was hesitant to include “Better Tomorrow” on the album. They thought that the hook: You’ll feel better tomorrow / Even though I know you think you’re gonna die, was too “on the nose.”

“My label thought the lyric was a little too harsh,” he explains. “I tried a couple other versions and tried to change it, but it just didn’t hit the same way.”

Wanting to be as truthful as possible, Simons kept the line as he originally wrote it. “It’s how I feel in the moment of a panic attack,” he says. “You truly think you’re not going to make it. So it’s the process of remembering, ‘I’ve done this before. I’ve felt this feeling. And I’ll feel better tomorrow.’”

While the album is deeply rooted in Simons’ lived experiences, he co-wrote each song with producers and other songwriters. Since Identity Crisis is so focused on mental health struggles, he wanted to ensure that the songs would still be relatable and resonate with listeners.

“It’s great to have multiple brains in the room working on one concept,” he says. “It also leaves room for them to talk about their own struggles and stuff that I go through. Having that collaboration lifts the songs up a lot.”

Simons also loves the process of co-writing because it allows him to build the music and the lyrics at the same time. His songwriting process typically involves him and a producer figuring out “which melodies will work for certain words.”

“It works best when you do music and lyrics at the same time,” he says. “They’re so related. Some words will sound good with certain chords and melodies, and some won’t.” Having someone else in the room to bounce ideas off of makes the process a lot smoother.

Simons chose the title Identity Crisis partially because it is exactly how he describes his music. While his songs generally fall under pop, he doesn’t have one particular “sound” that he aims for. The same goes for his albums— rather than trying to nail down a theme or throughline, Simons showcases his versatility.

“The way that I make albums is almost like just a collection of songs I’ve written in the last few years. I don’t have one sound that I want to get for each album,” he says. “It lacks cohesiveness sometimes, but I hope it makes up for it in variety. I call it Identity Crisis because it’s like, ‘What is my music?’ It’s an identity crisis.”

He notes that this is especially evident on the upcoming album, hence the title. The lack of cohesion is, in part, because of the pandemic. Since he was unable to go to writing sessions during peak Covid times, it was difficult to create new music. “I feel like [Identity Crisis] a little less organized than some of the other ones because there was a break for at least a year when I couldn’t write at all,” he says.

After five years of writing and putting the album together, Simons is more than ready to unleash it to the world. “It’s taken five years or so to write it all, which is crazy. I mean the last two years didn’t exist so it feels like significantly less than that,” Simons laughs.

Simons has used a waterfall release schedule for Identity Crisis. Lucky for fans, six of the ten songs are already available on streaming platforms. The full album will be available on May 6, 2022, but in the meantime, listen to his latest singles HERE.

As his most vulnerable work to date, these songs have already resonated deeply with listeners. “Identity Crisis” has reached over one million streams on Spotify, and “Too Much” has over two million.

“I’m very lucky to have a personal connection with a lot of fans,” Simons says. “I’ve gotten a lot of people, especially with the songs that focus more on mental health like ‘Better Tomorrow’ and ‘Identity Crisis,’ where it’s exactly what people needed to hear in that moment. As a songwriter, you love to hear that.”

Simons will also be on tour in the U.S. and Europe from May through September, so buy tickets to see his live shows HERE. 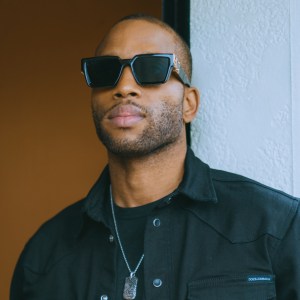