Between semesters, the band set up shop at a lake house, identifying their niche and honing their sound. Their namesake lends itself to a tradition of performing in the nude for friends that came by their temporary abode. The group’s contagious spirit soon moved their committed audience to join the movement, partying au naturel.

Continuing to gain momentum, the college friends relocated to the Catskills. In their new environment, they focused full-time on this endeavor, but with clothes on. Earning their keep gardening, tending to animals, and general groundskeeping, the nature-dwellers continue to draw inspiration from a rocky landscape.

The release of Nude Party’s self-titled debut in 2018 confirmed the band’s musical talent transcended their campus reputation as “the naked party band.” The record opened doors to previously inconceivable opportunities, like supporting Jack White and Arctic Monkeys on tour, dropping in on Lollapalooza, Bonnaroo, Newport Folk Fest, all of which required dress code.

Releasing Midnight Manor, their namesake is now a legend of a past life. Those early, devout supporters watch on with fond memories their friends lay bare folk-like, psychedelic funk. Reminiscent of a time one cannot quite place, their sonic scaffolding resounds rock n’ roll for a multi-generational pallette. The Nude Party’s boundless soundscape is a dynamic display of their friendship, creating an almost tangible aural bond.

The 12-song set was recorded live-to-tape over six days at the Outlier Inn in upstate New York and mixed by John Agnello (Dinosaur Jr., Kurt Vile). Midnight Manor came to fruition as the world seemed to crumble beneath them. Prior to the pandemic, the group convened amidst much personal turbulence from the band members to put pen to paper on this construction.

“A lot of things had fallen apart,” says lead vocalist and guitarist, Patton Magee.  “Everyone went through a lot and coming back together in the winter to write and record these songs felt like a reunification. And it was a really powerful feeling. The songs that had come out from previous ideas we’ve been thinking up to the last two years on the road.”

Songs like “Things Fall Apart” speak directly to this birthing moment. With old friends, personal strife is felt by all and shared sonically throughout the album. “Shine Your Light,” one of Magee’s proudest songwriting contributions, reflects the other side of that valley and optimism for the band’s future. When March rolled around, these tunes took on additional layers of meaning.

Despite romantic break-ups and general creative withdrawal prompted the distraction of a never-ending news cycle, The Nude Party delivers a cohesive exhibition of their journey thus far. Listen to Midnight Manor below. 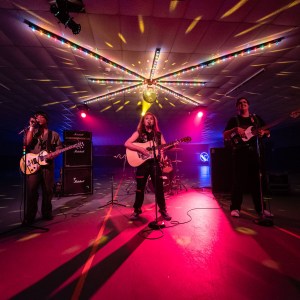 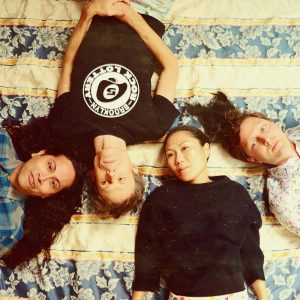