In many ways, it’s a miracle Love-Lore, the new, five-track, 35-minute LP from the San Francisco-borne band, Deerhoof, exists. To begin with, the album is an intricate amalgamation of dozens of songs and bits of classical or pop culture – from the Knight Rider theme song to Kraftwerk, B-52s and Sun Ra covers – woven together like a woolen scarf of musical history. To knit the 40-plus songs together takes the kind of skill and inspiration a single lightening bolt strike induces on the psyche. Secondly, and perhaps more importantly, if you ask the band’s members, it’s astounding humanity as we know it still exists today despite shoddy politics, greed and unfulfilled social promises.

“It’s a medley of music from the 50s through the 80s that includes a lot of what could be genre-classified as classical,” says drummer Greg Saunier, who co-founded Deerhoof in 1994. “But it includes a mixture of pop music, jazz, Brazilian, some electronic, metal, soundtracks and jingles.”

The album, Saunier says, was inspired in large part by a 2012 article in The Baffler called, “Of Flying Cars and the Declining Rate of Profit,” by David Graeber, which essentially makes the case that modern, contemporary times do not look as we were promised. There are no robot butlers, no flying cars. If anything, poverty and inequality is worse. The only ones with flying cars (private jets) are the super rich. So, the substance of Love-Lore consists of songs or bits of music that speak to such unfulfilled expectations and wishes. In the same breath, Saunier notes, the album points to the idea that people shouldn’t, in fact, look to technology or other “gods” for hope or relief. We should make it ourselves.

“The answers have always been there,” he says. “It’s possible for humans to have sustainable priorities in a way they organize themselves.”

The catalyst for the record came from outside the band. A friend who organized a musical festival in New York City asked Deerhoof to participate. The only thing, though, was that the festival wasn’t rock-based. Instead, it was more avant-garde in nature, sonically more classically-based than three-chord fuzz. The festival organizer pushed Deerhoof to come up with something different, more out there than a standard rock set. So, the four-piece, which also includes bassist-singer Satomi Matsuzaki and guitarists Ed Rodriguez and John Dieterich, began the work of condensing 40-plus single songs of their choosing into something digestible and interesting and provoking.

Months later, the band found itself in New York for the festival. The show was a week out and they continued to cram, this time inside of a modest (to say the least) storage unit-turned-mini-studio with a “tiny PA” and “broken amps.” They played the songs in order, over and over, the muscles of their hands, fingers and limbs learning and absorbing the work as much as their minds and memories.

“We weren’t reading sheet music,” Dieterich says. “Just the sheer quantity of notes and information was such that there was definitely a limit to my ability to synthesize everything! Song by song it was easy but the whole thing – to even have that whole order down was something.”

Hearing Saunier and Dieterich talk about the album makes it seem like the actualization of the LP was even more improbable than anyone had first thought. But by playing the songs together and interlocking them so tightly, it made the lengthy composition eventually seem seamless. Art is funny that way. In the same way as a child learns language tediously and arduously over time, eventually that child can master sentences with impeccable fluidity.

“It’s almost like faking someone else’s slang,” Saunier says. “But it has its own life. We turned it into folk music.”

Listening to Love-Lore, the band’s 16th studio LP, is as much a treasure or Easter egg hunt as it is a musical experience. At seemingly random moments your ears will perk up when you’ve overheard a snippet from “Electric Avenue” or that indelible opening pulse from Knight Rider. The LP is a newly made record that one might assume was put together electronically – a digital cut here, a Pro Tools Scotch tape there. Rather, though, it was put together painstakingly – through exhaustion and migraines – in a way that it could be reproduced both live and on wax at the drop of a proverbial hat.

“That’s part of what made it really fun,” Saunier says. “For us, Love-Lore is actually made of music that we love and that we love to play. We love those records, as flawed as they might be. On this, we’re musicians but we’re also fans, paying homage to the music that gets us going.”

Check it out on Bandcamp! 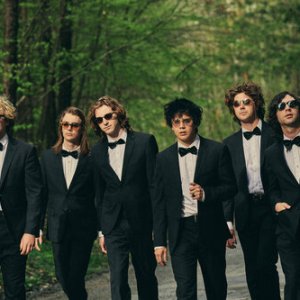