This article originally appeared as the Editor’s Note in the November/December 2011 issue.

Guy Clark rolls another cigarette, fires it up, and then proceeds to spread his poison across the room. We’re sitting in his workshop at his Nashville home, where he’s agreed to play a few songs for us on camera.

For the last decade or so, the workshop has served as his sanctuary, so to speak, the place where he writes songs, builds guitars (which he marks with his own blood thumbprint), and gets down to the business of being Guy Clark.

It’s a surprisingly small space, given all that he does in it, but it’s not unlike the way he dreamed it, he says. A library of cassettes blankets one wall, with numerous offerings by Rodney Crowell, Tom Waits, and Mance Lipscomb, among others. At the other end sits his guitar work-station, where his tools are arranged neatly on the wall and in coffee cans. There’s also a poster that details the specs of a flamenco guitar. The first guitar Clark ever built, back in the mid-60s, was modeled after a flamenco model designed by esteemed Spanish luthier Domingo Esteso, and he’s made several like it since.

During our visit, the West Texas native plays three new songs, because “ya’ll need to hear them and I need the practice,” he says. He talks and smokes between tunes, tamping his cigarette into an ashtray decorated with skulls, a gift given to him by his friend Emmylou Harris.

One of the songs, “My Favorite Picture Of You,” is based on an old Polaroid of his wife Susanna. He pulls the picture out to show us. “Me and Townes were in that house drunk on our ass, being totally obnoxious,” he says, pointing to the pic. “And Susanna had finally had enough, and said ‘I’m leaving.’ I think John Lomax was outside and he took that picture. And for some reason, that has always been my favorite picture of her.”

The fact that Townes was complicit in this episode is not surprising. A long-time compadre of Clark’s and a fellow outlaw spirit, Van Zandt is a constant theme this afternoon, constantly cropping up in conversation. A black-and-white photo of the late Texas songwriter, taken in the early ‘90s, hangs high on the wall and looks out on the whole scene. “Townes always said he wanted to die here in this house,” Clark says. (Rodney Crowell is also referenced constantly. An oil painting of Crowell that Clark did hangs next to his own self-portrait in another room.)

Sitting here, listening to the songs and stories amid the heavy smoke and old photographs, you can’t help but feel the magic – especially if you’re steeped in the mythos of the Texas songwriting canon. We’re still smack in the suburbs of Nashville, to be sure, but it sure doesn’t feel like it. The plasticity of Music Row feels worlds away.

Clark turns 70 this month, a milestone that has birthed a double-disc tribute album, with guest turns from Crowell, John Prine, Hayes Carll, and many others. Willie Nelson serves up a great rendition of “Desperados Waiting For A Train,” a tune Clark wrote in his 30s about an old-timer of 70 years with a tobacco-stained chin. Talk about full circle.

It’s already been a pretty good year for the songwriter. On this day in late summer his new live album, Songs And Stories, recorded at the Belcourt Theatre in Nashville, is the number one seller in Amazon’s mp3 store. But he doesn’t seem to be too impressed by it. “My record label called to tell me that … I said, ‘Great, send me the check.’”

In his later years, Clark says he’s turned to co-writing more, due to the fact that “he got stuck and ran out of shit to say.” He says the last song he wrote completely by himself was “Dublin Blues,” back in the mid-90s. Instead, he now collaborates with whatever young gun he can.

Even at 70, Clark refuses to quit. He’s still lighting out after inspiration. 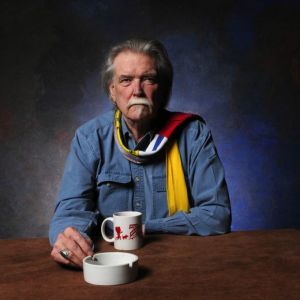 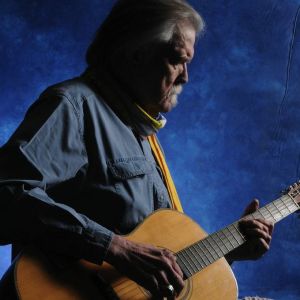