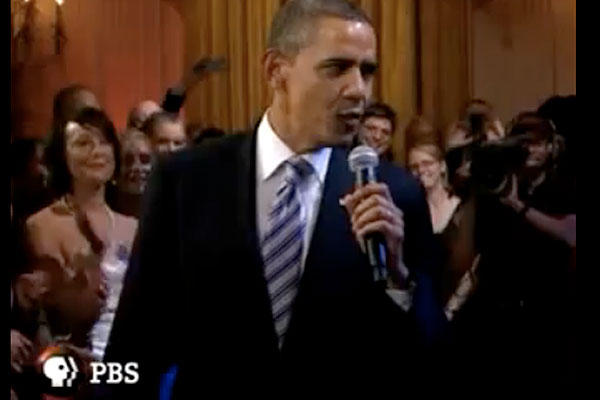 It’s been just over a month since the nation got its first glimpse of President Obama’s pipes when he broke into song singing Al Green’s classic, “Let’s Stay Together,” at a fundraising event in Harlem. Obama took to the mic once more last night during an intimate taping of PBS’s “In Performance at the White House Series” in The East Room of the White House.

As the show was ending, Obama stepped up to the side of the stage with a genuine smile on his face and gave a quick thanks to all of the performers. However, before the President could get too far, Buddy Guy was quick to invite the President back to the mic. After a few pleads from Guy, Mick Jagger, and B.B. King, Jagger handed over his mic to Obama, giving him no choice but to sing. Finishing out the night, Obama delivered the last few lines of the blues anthem of his hometown, “Sweet Home Chicago.”

The performance is scheduled to air on PBS next week on the 27th, but you can check out the President’s special cameo below.