Puddle of Mudd’s Wes Scantlin has been through it all—and then some.

With divorce, several arrests, and drug use during his heyday and subsequent years, he has kept the mentality, any press is good press. It offered him the preserving attitude necessary to carry on his career. Now, newly sober, Scantlin looks back on those early days as an era of learning and transformation graced by hits from Puddle of Mudd’s breakthrough record Come Clean.

Come Clean gave the rock world songs such as the scorned break-up anthem “She Hates Me,” the sultry, provocative “Control,” which was too risqué for even some mainstream rock stations in 2001, and of course the band’s biggest hit to date, “Blurry.”

Limp Bizkit frontman, Fred Durst, picked up Scantlin for Puddle of Mudd and immediately signed him to Geffen Records, just before the songs of Come Clean met the world.  Many of those songs were ones Scantlin already had on the back burner for years. After Durst flew The Kansas City native out to Hollywood, the ride began quickly for Scantlin.

“Come Clean is an amazing record,” Scantlin told American Songwriter. “We had such a great time experiencing everything and going through crazy stuff when we became humongous. There were some tough times too. I didn’t know I’d have to do so many interviews. That’s one part I didn’t see. And other tough things were running into the wrong people. I realized you have to change your playground and your playmates and keep God first- period.”

Scantlin admitted drugs contributed to much of the chaos for him in the early days, and he experienced a lot of the negatives of being a huge star. Back then, there were a lot of people in his circle who were looking to benefit themselves, instead of his career. But in retrospect, it offered Scantlin some gratifying insight into the business and people in general. It also taught him to seek and value opinions of those most loyal and closest to him, instead of business connections, especially when it came to new material, such as the group’s latest record, 2019’s Welcome to Galvania.

“I run everything by my dad,” Scantlin said. “Outside opinions always matter to me and I enjoy their perspectives on the music.”

The title, Welcome to Galvania was actually inspired by Scantlin’s father, Bill Scantlin, who has always measured Puddle of Mudd’s greatness of each album with the Galvanic Skin Response—or goosebumps. One of the songs to pass the test was Wes’s favorite song, “Go To Hell.” When writing the lyrics, Scantlin was exploring the idea of heaven and hell, the choices that people make and how it can impact the end-of-life outcome.  That sentiment took on even more meaning when his cousin Sean Scantlin lost his life.

“It’s kind of like when the angel is on one shoulder and the devil is on the other,” Scantlin said about “Go To Hell.” “You turn to God to figure it all out for you and he will. It’s the crossroads in our life. We make a choice about which way we are going.”

The first single from Welcome to Galvania, “Uh Oh,” peaked at No.9 of Billboard Mainstream Rock charts and dished up more of the classic, party anthem style that radio knows and loves. And with only three hooks and a minimal Tom Petty approach, it’s possibly the catchiest from the record.

“The whole song has got to hook, and that’s when you know you’re on the right track,” Scantlin said about writing the hit “Uh-Oh.” “I think we played ‘Uh Oh’ a few times live over the last five years. And the response has always been a ‘cheers’ at the end of the song. Everybody loves it.”

With Come Clean at the foundation of Puddle of Mudd and Welcome to Galvania plunging Scantlin into the next era of the band, he only has one thing to say about it. “I write what I write.” And he certainly has plans to do more of that, especially since he has more time amid the pandemic to focus on his creativity.

“I hate to say it, but I’ve actually slightly enjoyed the time off,” he said about 2020. “And there is plenty in the pipeline, believe me. All I’ve been doing is writing.” 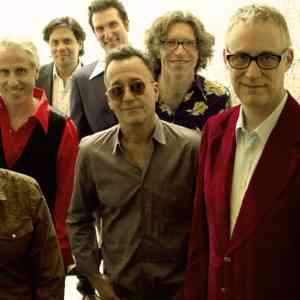