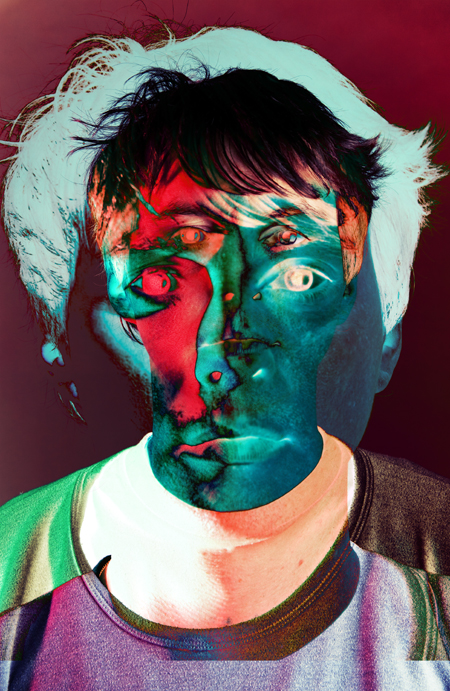 Tomboy is a dense study in electronic music, where dub rhythms form a watery foundation for guitars that sound like layered synths. On top is the nonpareil beauty of Noah Lennox’s voice. “The voice is a special thing for me,” he says. “It’s my favorite way of wanting to translate something to someone.” The Animal Collective member doesn’t mind if people generalize his music as a “clumsy attempt to blend” the two biggest musical influences in his life: high school choral music and techno. “I remember singing in chamber chorus, it took all of us – and hopefully the listener too – to a stimulated state of mind. Some people call it trance. People have a lot of words for it.” But “[techno] is emotional in a very different way,” says Lennox. “There’s something about repetition that instantly takes you there. Some people think about Detroit techno as background music, because there isn’t much going on. But if you listen to it really loud and feel the vibrations, there’s something very … primal about it.”

For Tomboy, Lennox tossed out his Roland SP-303 samplers – what he affectionately calls his “songwriting buddies” – in favor of guitars. “I’d written so many songs [using] samplers and I was feeling like I was starting to write the same kind of song over and over,” he says. On Person Pitch, he’d “find nuggets of sound” and repeat them until melodies would form in his mind, usually over one drone note or chord. But for Tomboy, he says, “I wanted to write songs with lots of chords.” Lennox says that at one point in his life he could read music but has totally forgotten the technical aspects now. “I don’t know what any note on the guitar is. I tune the guitar in a way that I can make chords that I like that are easy to play. My process is really kind of hodgepodge. I guess I believe there are certain times when I’m gonna do good stuff and most of the time I’m not. So when I make something that I like, I usually try to record it somewhere.”

Track: “Last Night At The Jetty”

“The rhythm was the first thing,” says Lennox of his maritime-inspired air, which centers around high harmonies and an accented clap on the fourth beat. “I wrote the rhythm in my head and was like, ‘I’m going to do a song to this rhythm.’ [After the] vocal breakdown in the middle, that whole part of the song was the song for a long time. Then I woke up one night with the first part in my mind and went to the computer and turned the microphone on and sang it in there.”

While he loved the compressed sound that the SP-303 gave samples, for Tomboy Lennox turned his attention to Korg’s M3 workstation module, a “white box with weird little faders and knobs” that usually has a keyboard attached. Keeping a “rudimentary input method style,” Lennox ran his guitar through the M3’s matrix of effects. He upgraded from the free version of Cubase he had used for Person Pitch to Ableton, though he admits he remains hardware and performance-oriented, thinking of the computer only as a “multi-track machine” and rarely using it for signal processing. “Basic” became Lennox’s mantra on Tomboy. “Is this basic enough?” he’d ask himself as he evaluated the work, insisting on being able to play all the songs live as he recorded.