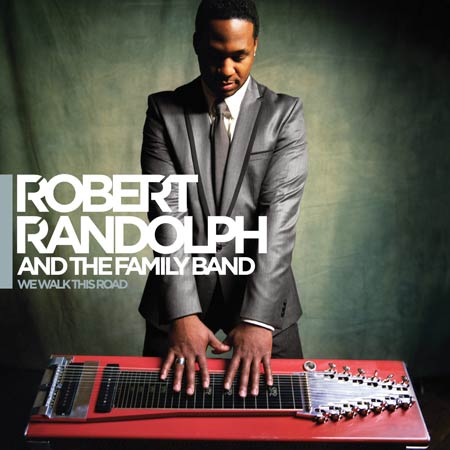 ROBERT RANDOLPH AND THE FAMILY BAND

We Walk This Road

Having taken the long route from little-known gospel artist to the Jimi Hendrix of sacred steel, Robert Randolph is the rare musician who has managed to carve out a unique place in the American music continuum with little more than hard work and musicianship. Still, those prodigious gifts come with a price, as such virtuosity often threatens to drown out everything else in such an artist’s creative sphere, reducing an otherwise multifaceted musician to a caricature of nimble fingers and deft technical flourishes. Intentional or not, Randolph’s albums have reinforced the myth with endlessly spirited but occasionally exhausting exercises in masterful musicianship, long on dazzling showmanship but falling short of capturing the nuance of his playing and soulful ache of his quietest moments. In fact, after honing a tightly constructed amalgam of funk, soul and gospel on 2006’s Colorblind, you had to wonder just where he would find room to grow. With We Walk This Road, Randolph finds the path to the future cuts through the past.

Despite his previous eclecticism, Randolph admitted that his strict religious upbringing had limited his listening choices as a teen and that prior to recording the album he hadn’t dug much deeper than the 1970s for his education in African American music. He couldn’t have picked a better tour guide than T Bone Burnett, the producer with a near-encyclopedic knowledge of pre-World War II blues, folk and gospel. Burnett’s heavy hand drops bits of archival recordings from the 1930s into the album as interludes that segue into Randolph’s reanimations. Though such moments are blatant, Randolph and his band appear to be at home inside the traditional material. The spiritual “If I Had My Way” is rebuilt with a rockabilly motor, with soft acoustic textures. Ben Harper drops his warm baritone in among the richly swirling harmonies. Also successful is the band’s re-appropriation of “Dry Bones” as a Sly & the Family Stone-styled jam, just as the handclaps and tambourines on “Traveling Shoes” conjure a homespun immediacy that echoes the expressive tone of Randolph’s pedal steel.

Less successful are Randolph’s more contemporary covers – an indifferent rendition of Bob Dylan’s “Shot of Love” and a limp version of John Lennon’s “I Don’t Wanna Be A Soldier Mama” –but Burnett generally succeeds in trimming away some of Randolph’s tendencies toward monolithically bludgeoning arrangements, finding a leaner, more focused band underneath. That no-frills approach also sucks the bottom end out of “Back to the Wall,” taking much of its would-be funk bounce with it, but moderation allows for a wider range of tones and moods than previous Randolph releases. Best of all is “Don’t Change,” a track soaked in barking distortion, nimble acoustic guitar fingerpicking, and junkyard percussion that pushes the band toward an idiosyncratic hybrid of all the variants floating in their stylistic pot, ranking as one of the most dynamic moments in Randolph’s catalog.

That sense of restraint ends up being the album’s definitive feature, and longtime fans might be put off by Randolph’s relative lack of steel guitar pyrotechnics. But what We Walk This Road lacks in over-the-top displays of technique, it makes up for in soul, as Randolph’s tasteful playing and subtle vocal phrasings emerge more clearly when not fighting for space inside overloaded arrangements. Burnett’s genius is allowing room for that Randolph to assume center stage, and every layer of polish that is removed brings him one step closer to the unvarnished roots that have nourished the music he has spent his life perfecting.