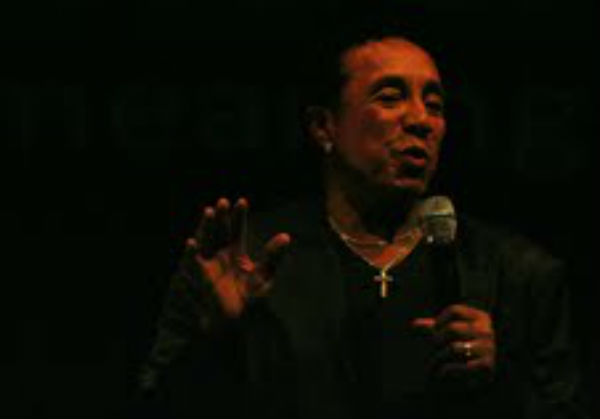 “Rhyming comes naturally to me,” said Smokey Robinson, the legendary songwriter and Motown star, last night on the stage of North Hollywood’s historic El Portal Theatre. It’s an understatement. Although those rhymes are long famous in classic songs he’s written and performed, such as “Tears of A Clown,” “Going To A Go-Go,” “Shop Around” and so many others, what’s less famous are the rhymes Smokey instills into his epic poems. He recited several of these poems at El Portal with the vital, verbal energy of a young rapper, and touched on areas every bit as timely and relevant, such as racism, the use of the word “African-American” and human nature in general.

“Words” was written by Smokey with Linda Cevallos-French, who also directed it. She produced it with Brian French.

Delighting the audience, who were responding throughout as if in church with a steady expression of “Hello!” and “Hallelujah,” Smokey also told richly-detailed and very funny stories about his “longest friends,” Aretha Franklin and Diana Ross, both of whom he grew up with in Detroit, and Motown-founded Barry Gordy, who launched his career. Perhaps the most astounding story, in its recognition of true greatness and generosity, was about the time Smokey with the Miracles got to open, at the very start of their career, for Ray Charles at the historic Apollo Theater in NYC.

Armed incompletely with chord charts but no actual arrangements of his songs at first rehearsal, Smokey was sharply castigated by the Apollo folks who were shocked he’d show up so unprepared. As he was being denigated for his amateurism, the great Ray Charles showed up.

“Hey, what’s all the problem?” he asked. When they explained, Ray asked Smokey if he could play the song for him. Stuttering and scared, Smokey managed to say, “Y-y-y-yes, Mr. Charles, I c-c-c-can.”

Ray told him to sit down next to him at his piano bench – a heady place for any young musician to sit! – and said to play the song. Smokey did, and Ray Charles – a fairly fast study, after all – learned the song and began to play it himself for his band.

“And he played it,” Smokey said with awe. “Ray Charles played my song. He played it like I had neverheard my song played before.”

Ray then proceeded to arrange the song on the spot, telling his horn players where and what to play, and quickly whipping the arrangement into place.

Smokey learned a life-long lesson that day, he said, “a lesson about giving. About generosity.” It was a lesson he never forgot.

His poems were long, inspired, rhymed, and quite remarkable in the sustained verbal momentum he achieved with his great gift for rhyme and love of words. “Woman” is a beautiul prayer to God to build a perfect human, one with a mixture of all the attributes necessary to live and lead a good life, from a recognition of God – a subject which rang through the proceedings – to a sense of humor, humility, and more. It ended with the request: “Call her Woman.”

“O” is a wonderfully energetic and funny account of several men of different races meeting at a blood bank to embrace the understanding that although they all had different color skin, that their blood was the same. This recognition of man’s unity under the skin was especially resonant coming from this man who said many times “I love being black.”

“Oh My God” is a beautiful chain of thoughts that essayed his sorrow at the way God has been extracted from so much of American life, when he feels a recognition of the Creator is exactly that which unites us all.

“My Dog Ran Away With My Cat” was a brilliantly funny exploration of human nature as it applies to sex, romance and timeless relations between the sexes.

The final poem, “Being A Black American,” took on the subject of race identification – after celebrating in “O” the common blood which flows through all human veins – and explored with great savvy and humor the oddity of calling these Americans who have been here since the dawn of our nation “African-Americans.” There are African-Americans, he said, who have moved here recently from Africa and make their homes in America now. But for those generations of Black men and women who have lived in this country for centuries, and for whom racial lines have blurred because of generations of mixed heritage, the word, he said, is Black.

“As my brother James Brown said, say it out loud, I’m black and I’m proud.”

Smokey also inserted a few singing moments into the show, a great gift for the audience as he sang, a capella, with the sweet tenor that George Harrison called his “effortless butterfly of a voice.” A long, very loving standing ovation ensued after Smokey’s last words, ending a magical night at this theatre where magic has been presented for decades.

For more information on the great Smokey and “Words,” which is available in print, see www.smokeyrobinson.com. 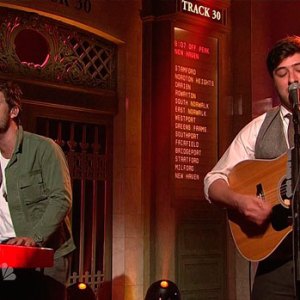 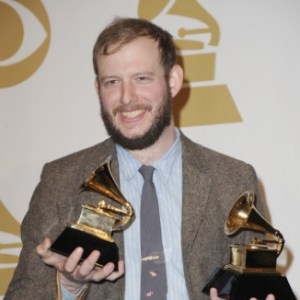