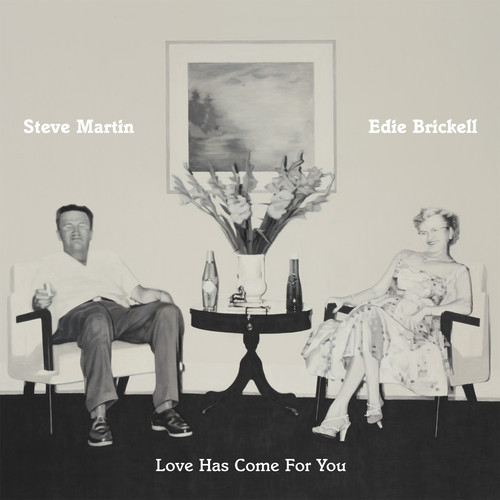 Steve Martin & Edie Brickell
Love Has Come for You
(Rounder)
4 out of 5 stars
On paper, this unlikely partnership between funnyman comic, actor, playwright, author and most significantly, Grammy Award-winning banjo player Steve Martin with hippie-ish, New Bohemian pop vocalist Edie Brickell, is an unlikely pairing. It seems like something cooked up in a boardroom marketing meeting to increase the visibility of both artists. Add veteran producer Peter Asher (Linda Ronstadt, James Taylor, Bonnie Raitt) for even greater commercial – and editorial – prospects. Thankfully, the reality is more organic and the results are impressive despite, or perhaps because of, the participants’ dissimilar resumes.

It began when Martin asked Brickell to write lyrics to a banjo melody he had composed. He was so excited with what she returned that he continued the collaboration, even though they live on opposite coasts. The two exchanged files through e-mail as Martin sent banjo licks to Brickell who then wrote words to match them. Thankfully, the digitized nature of constructing these thirteen original songs by file-sharing doesn’t reflect the music’s decidedly analog, rural folk/bluegrass vibe.

The backwoods approach would seem to conflict with the more pop oriented confines of Brickell’s career, yet it spoke to her Texas upbringing. However, she has long harbored a love for the music of Bob Wills and Buck Owens and this provided her a chance to become part of that world.

Martin, whose expert banjo playing nobody at this stage would describe as a “vanity project,” wanted to shift from the more notes per second approach that much of bluegrass adheres to, in favor of a sparser, more defined sound. That keeps the drama high and the ego low on these evocative songs. “The point is to tell the story and get out,” he remarks. Mission accomplished as the twosome unravels 13 tracks at a relaxed pace in less than 40 minutes. Occasional accompaniment from high profile backing musicians such as bassist Esperanza Spalding, guitarist Waddy Wachtel (an old Asher crony) and Nickel Creek’s Sara and Sean Watkins, along with sweet, sympathetic strings, enrich but never distract from the music’s inherent story telling simplicity. Peter Asher’s California folk-pop background is a perfect if perhaps not entirely logical complement. He shifts focus to the song and away from the playing, clearly what Martin was aiming for on his third time out as frontman.

Even hoedown-ready pickers such as the sprightly, light-hearted “When Are You Gonna Wake Up?” (asking the playful, schoolgirl questions “who you gonna take to the dance …,” the picture show … and the back row of that movie?) never descend into gratuitous banjo heavy speed fests. Much of the material has a darker edge that Martin’s playing enriches. That’s true of “Shawnee” where the singer recounts that if the titular character had attended the family picnic, her creepy cousin with the handlebar mustache would not have sat on her lap and opened a cola. We don’t get many more details about the incident, but the implication is that it did not end well.

On the title track, one of a handful that concerns children, a baby born out of wedlock that the community tells the singer she should give up for adoption, is bonded to his mother by a lifelong love. The stripped down sound of banjo and whispered percussion tells the simple but moving story without extraneous instrumentation.

In contrast, the mother in “Yes She Did” commits suicide by throwing herself into the river leaving a baby and a family asking why. We never learn more about the incident in the 95 second playing time, which is typical of many of Brickell’s lyrics.

As producer, Asher understands when to leave well enough alone and when to subtly supplement the recording with other instruments. Bringing in haunting chamber strings, as he does to the mournful “Friend Of Mine,” enhances and emphasizes the tune’s earthy tendencies. The innocent “oooh-la-la” female backing to the jaunty “Siamese Cat” along with understated percussion augments the playful song’s early ’60s strains without devolving into cliché or kitsch.

Those unfamiliar with Brickell’s previous work, and even the singer-songwriter’s fans, will be entranced by her distinctive rounded, innocent yet mature voice. Along with composing compelling lyrics, it’s difficult to imagine a more sympathetic vocalist. She brings sly, unassuming gravitas and the occasional lighter touch to the affiliation. Asher’s deft work provides breathing room between the instruments, Martin’s subtle playing leaves the showboating behind and the trio delivers a modest gem. The final product is informed by bluegrass yet expands the genre’s somewhat narrow boundaries while maintaining and even enhancing a reverence to its rustic roots.

Let’s hope this is the beginning of a long standing, three-pronged, musical relationship. 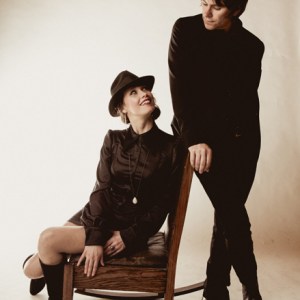