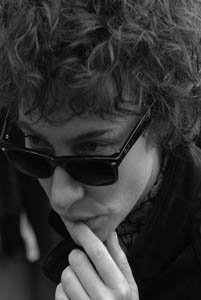 A lot has been said about “Like A Rolling Stone” already. In fact, entire books have been written about it. It’s a rock and roll institution, a declaration of independence, and a cosmic romp through interior streets. And once it hit airwaves in the summer of ’65, it looked to be the final nail in the coffin in the image of Bob Dylan, acoustic guitar-wielding protest singer. Old conventions were laid to rest. The future was now. How did it feel?

The All Music Guide calls it “one of the most self-righteous and eloquent indictments ever committed to wax.”

Dylan himself described it as a “long piece of vomit,” but he meant that in the nicest of ways.

“This long piece of vomit, 20 pages long, and out of it I took ‘Like a Rolling Stone’ and made it as a single,” he said. “And I never written anything like that before and it suddenly came to me that was… that was what I should do. After writing that, I wasn’t interested in writing a novel or a play or anything, like I knew like I had too much, I wanted to write songs.”

The idea for the song is said to derive from a 20 page short story about a disgraced society girl Dylan penned during his acoustic tour of the UK in May ’65, while he was still performing his folk material to swooning fans. He then whittled it down to 4 verses and a chorus upon returning to Woodstock, New York.

“The first two lines, which rhymed ‘kiddin’ you’ and ‘didn’t you,’ just about knocked me out,” Dylan told Rolling Stone in 1988. “And later on, when I got to the jugglers and the chrome horse and the princess on the steeple, it all just about got to be too much.”

“Like A Rolling Stone” tells the story of Miss Lonely, who went to the finest schools, but learns too late that she knows very little. Now, after an undisclosed amount of time on “the street,” her ideals have been compromised, her friends are gone, and chrome horse rides with diplomats are no longer feasible. Even Napoleon in rags has lost his charms, now that she’s homeless.

Of course, those are just details, all of which get blurred when we apply the song to our own situations. Part of LARS’s enduring power comes from its open-ended chorus. “How does it feel?” it asks. It doesn’t tell you what to feel. You supply that part yourself. In that way, it’s like a personality test. Does losing everything you once knew (be it childhood, your innocence, your preconceived notions or your first apartment) depress and scare you, or exhilarate you?

Apparently, Dylan didn’t find the song’s acerbic lyrics as mean-spirited as everyone else did. In Robert Shelton’s “No Direction Home,” he complained:

“Why does everybody say of something like ‘Like a Rolling Stone,’ “That Dylan…is that all he can do, put down people?’ I’ve never put down anybody in a song, man. It’s their idea. ‘Like a Rolling Stone was very vomitific in its structure….It seemed like twenty pages , but it was really six. I wrote it in six pages. You know how you get sometimes. And I did it on a piano. And when I made the record, I called the people who made the record with me, and I told them how to play on it and if they didn’t want to play it like that, well, they couldn’t play with me….When I wrote “all you got to do is find a school and learn to get juiced in it,’ I wasn’t making this song about school. That’s their idea. Their definition of school is much different than mine. My language is different than there’s. I mean REALLY TOTALLY DIFFERENT! The finest school might be out in the swamps.”

The song’s origins are steeped in legend (nearly as large as the one behind Robert Johnson’s “Cross Road Blues,” in which Satan gets a co-writing credit). There’s the story of how Al Kooper finagled his way into playing the celebrated organ part that made it onto the final recording, even though he’d never played the organ before. Despite his inexperience, the take used for the commercial release of “Like A Rolling Stone” is pure rock and roll alchemy. Fittingly, the chorus contains the essence of rock and roll itself, employing the same chord progression as “La Bamba,” “Wild Thing,” “Louie Louie,” and “Twist and Shout.”

It was released as a single in July of 1965, reaching no. 2 on the charts (the Beatles’ “Help!” kept it from reaching No. 1) At six minutes long, DJs had to abandon their pre-concieved notions of how long a radio single could be, paving the way for freeform radio and the eventual deification of “Stairway to Heaven.” Out in the swamps of Jersey, a young Bruce Springsteen had a religious experience of sorts with LARS.

“The first time I heard Bob Dylan,” Springsteen said in 1988, “I was in the car with my mother listening to WMCA, and on came that snare shot that sounded like somebody had kicked open the door to your mind: “Like A Rolling Stone.” My Mother — she was no stiff with rock and roll, she liked the music–sat there for a minute, and then looked at me and said, ‘that guy can’t sing.’ But I knew she was wrong. I sat there and I didn’t say nothing but I knew I was listening to the toughest voice that I had ever heard. It was lean and it sounded simultaneously young and adult.”

Dylan debuted it live at the Newport Folk Festival in 1965, prompting Pete Seeger to run for his axe. He went on to perform it with members of the Band on their historic, booed-out world tour. Responding to nicely allegorical cat-call (“Judas!”) during a heated gig in Manchester, Dylan hit back with “I don’t believe you….you’re a liaaaarrrr,” and a wall-melting rendition of “Like a Rolling Stone.”

An awed Jimi Hendrix performed the song during his coming-out party at the Montery Pop Festival, stumbling over the lyrics — he was on a lot of acid at the time. “It made me feel that I wasn’t the only one who’d ever felt so low…” Hendrix said of the song. Later the guitar god would record and immortalize Dylan’s “All Along The Watchtower,” prompting Dylan to remark that all of his songs were Jimi’s as well.

“I wrote it. I didn’t fail. It was straight,” Dylan has said of “Like A Rolling Stone.” Indeed, his aim was true. Rolling Stone magazine, who’s name in part was chosen in homage to this song, went so far as to name “Like A Rolling Stone” the number 1 rock song of all time. Even though “Hey Jude,” “Imagine” and “Satisfaction” were right there. The esteemed mag placed LARS ahead of 12 other Dylan tunes, stating “no other pop song has so thoroughly challenged and transformed the commercial laws and artistic conventions of its time.”

But Dylan doesn’t put too much stock in lists that rank songs.

“That must be good to have as part of your legacy,” says [Ed] Bradley.

“Oh, maybe this week. But you know, the list, they change names, and you know, quite frequently, really. I don’t really pay much attention to that,” says Dylan.

“This week it is,” Dylan replies. “But who’s to say how long that’s gonna last?”