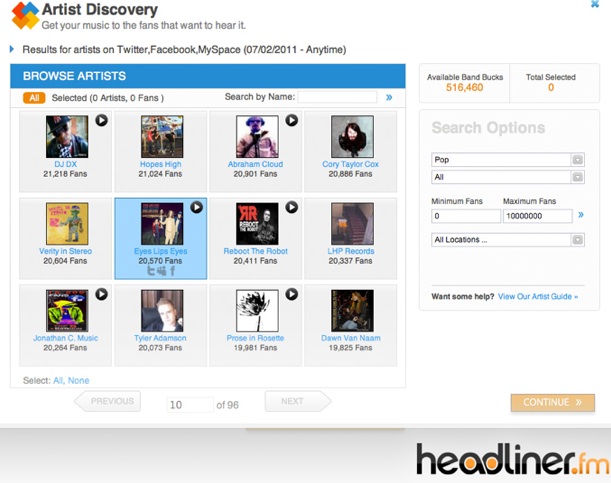 Mike More was a songwriter and owned a publishing company before he founded Nabbr, a video advertising network, and worked with artists like The Jonas Brothers to introduce new fans through social media and video.

But a few years ago, More says he was starting to see a new business opportunity in the news feeds of Facebook and Twitter. “It was an untapped marketing channel. It’s really where the conversation was,” he says about the real-time web. So More and his partners launched Headliner.fm.

Now, when an artist signs up for Headliner, they authorize each of their social accounts to run through the site. A band’s fans are converted into the site’s “band bucks,” a sort of virtual currency: one buck for each fan. If a band has 1,000 band bucks, they may look for a like-minded artist and send them a request to send out a recommendation to 1,000 of their fans. If Artist B likes Artist A and sends out the recommendation to their fans, Artist B just earned 1,000 band bucks of their own. Artist A just reached 1,000 new fans. As More says, “everyone wins.”

Of course, artists don’t have to recommend other artists, which happens a fair amount of the time on the site. More says that the discerning taste of artists is good for the curatorial fish bowl of Headliner.

We recently spoke to More about why MySpace isn’t as bad as everyone thinks, why he won’t be using email and Facebook in five years, and why he loves Soundcloud.

How did Headliner.fm start out?

We wanted to find an organic, holistic way for artists to promote each other and leverage their social capital. The most effective way to market to someone is to find similar fans. Bands have been cross-promoting each other since time immemorial. The Motown Revue used to go out on tour together because they had similar audiences.

Today, there are great DJs, rock bands, R&B bands. If you can find those audiences and let each one of those artists promote one another to their fan bases, then everyone wins in a lot of ways. This idea of collaborative promotion is really an academic idea, but in reality, very practical.

From a technical standpoint, it still has some pretty cool advantages. The search engine optimization is set up for artists’ names. If an artist has a free MySpace page, they will benefit by getting organic search traffic. People will discover them there. I think they’ve done a lot in the last two years to make their product much better than it was.

A lot of the challenges around their product is that it was so customizable that it became hard for music fans to go to the page quickly, which was really cool when it started. But with the new layout and design, it’s become very easy again to go check out new music.

In a broad marketing sense, if I were an artist, I’d be everywhere. There are so many tools now where you can manage your social web presence across Facebook, MySpace, Twitter, Tumblr, blogs. It’s not like you have to be in each different place to manage your social web presence. [On Headliner], you can send out a status update now across all these platforms. We want to make marketing promotions for artists as easy and simple as possible. We want to make it really easy for artists to go out there and start talking about the music. Social platforms are really good if they’re used in the right way.

A lot of artists seem to be dismissing MySpace. It’s interesting to hear your contrarian view.

A very top level view of all of these platforms is that they’re kind of like big parties. Anyone who’s seen [the decline of] Friendster, and now MySpace, can’t really believe that five years from now Facebook is going to be the place to socialize. I don’t believe that for one second. It might be Tumblr, it might be some mobile site we don’t even know about yet. But it’s not going to be Facebook. ‘Social’ is an activity that’s definitely here to stay but where that happens will move around. Now you’re dealing with [the question of whether] MySpace has enough historical value. It’s definitely not a place for innovation. So I understand that artists want to be around an innovative place.

I think the most antiquated way to reach people is email. Artists send tons of emails. If you look at the people who are falling off email, in like five years no music fan that could possibly buy music will be on email. If [artists] are willing to use email, they should be willing to use MySpace. [Laughs]

Artists can buy band bucks and also earn them through social interactions. Do you worry that might create different standards?

We spent a year creating a good incentive system. Incentives are really important when you have people recommending each other. 15% of promotions that go out get passed through into recommendations. That means that 85% of the messages get rejected. I’d say this is great because we have a highly curated artist space. We have artists who are not willing to send messages out for band bucks. They are curating them and only sending the ones out that they feel are a good fit for their fans.

This platform works because of quality recommendations. Money does not drive success at Headliner. This is why it’s not advertising. Advertising is horrible for most artists because if you buy a bunch of banner ads, and even if you target them, it’s not that engaging on social platforms. Recommendations are different. It’s people curating, taking the time to get involved in the social interaction.

How does Headliner’s SoundCloud integration work?

The reason I love Soundcloud brings me back to one of the points we talked about in the beginning of the conversation. You can use it to share your music across Tumblr, Facebook, Twitter, on your website, on your mobile application. Wherever an artist wants to share their music, they have an easy way to do it across all those fragmented social executions. 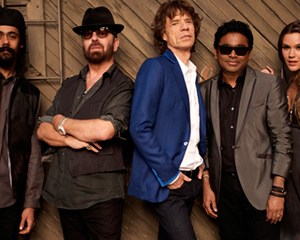 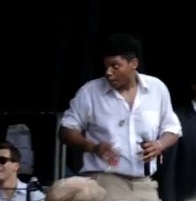