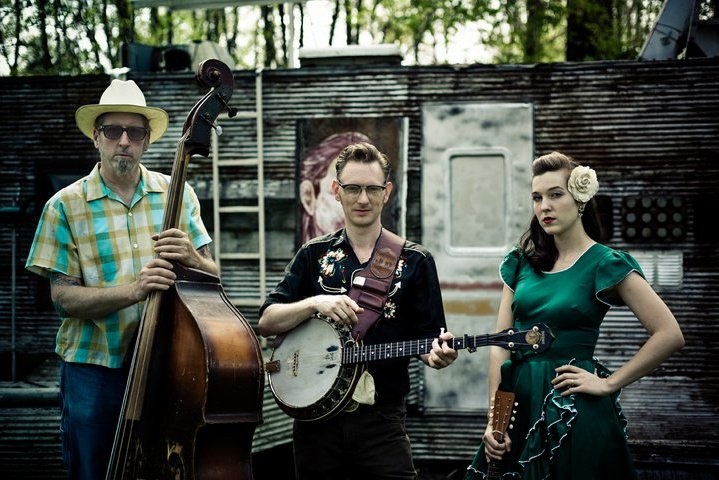 The Dirt Daubers, who release their new album Wake Up, Sinners! this week, are J.D. Wilkes of rockabilly punks The Legendary Shack Shakers, his wife Jessica on mandolin, and bassist Mark Robertson. The Paducah, Kentucky-based J.D. and Jessica recently spoke with American Songwriter about how relating to worker bees and The Clash, replacing horn sections with kazoo, and reporting the news with little more than a banjo, mandolin and upright bass.

Where did you get your band name?

Jessica Wilkes: Our old bass player swears he came up with it [laughs], but we all thought it was a good name, kind of a southern thing, and they’re neat little creatures. They’re very diligent little worker bee-type things. We just thought it was a unique-to-the-south kind of thing, so it kind of fit what we were doing.

Part of the appeal to your music is that it’s kind of rough-hewn and DIY, very roots-based, so how did you approach production on this album?

J.D. Wilkes: We wanted to keep that obvious in the recording process, even though it was a slick kind of Nashville studio, you know, with all the high-tech instruments and microphones and all that, so we kind of built in handicaps into the process. We forced ourselves to play live all together at the same time like the old-time bands did. Any tweaking that we needed to do was very minimal. Basically, we recorded in East Nashville in a buddy of mine’s basement. It’s got a lot of hardwood walls, so it almost sounds like you’re in an old cabin, with all that reverberating off the walls. I think we made the right choice by not going the typical Nashville route of overdubbing everything until it sounds like an overly produced, slick bluegrass record.

How long was the original material on Wake Up, Sinners! in the works?

Jessica: A lot of my songs I would say are about four years old at this point. We started playing about four years ago, and when we got married, I started writing songs, and I don’t know about J.D. – he’s always working on –

J.D.: Some of the songs were written during the height of my Shack Shaker years that just weren’t right for the Shack Shakers. They were maybe too rustic or too acoustic, but I’ve always kind of had those songs in my back pocket for the day when I’d have a band like this as a forum to showcase them. So it varies. Some of them were written for the record, like in the last couple years, and some around maybe 10 years, that have just been on the backburner.

What are some of those older ones, like the 10-year ones?

J.D.: “She and Us Pets,” the ragtime song, was an old song I’d written on the piano, boy, a long time ago. The melody came from a dream. I had this dream there was this wacky, Salvation Army circus band singing the song and marching down the road. We wanted to keep that kind of ragtag, catawampus sound in there, so we recorded it in a similar way that I heard it in my dream. But I had that dream eight or nine years ago.

Why did you select these particular covers for the album?

Jessica: Well, we did want to have a couple gospel songs in there. “Wayfaring Stranger” was something we’ve always liked, and we kind of made it in a minor key. We just liked that sort of dark sound for it.

And you titled the record after one of those covers. Why did you choose that title?

J.D.: It just was a good name. It had a ring to it, it kind of grabs you. The whole point of the record is to get you excited, wake you up. Sometimes in this genre, people get a little too precious and too orthopedic and soft, and we wanted to make a record that was full-volume and rollicking and a little more ornery.

How do you think these songs compare to your debut?

J.D.: Well, we’re better players now. The first record was very, very homemade and we were just starting to play these instruments. I was just learning clawhammer and Jessica was just learning mandolin, you know, it’s kind of like The Clash. The first record they make, they didn’t know how to play their instruments, and by the time they’re done with their career, they’re writing these huge, epic songs and are masters on their instruments. In a weird way, we’re kind of following that model.

Your bass player is based in Nashville and you are in Kentucky. Is that difficult for collaboration’s sake?

Jessica: It can be, but Mark’s so good, he’s such a professional, he can pick up on anything we’re doing. J.D. and I will play around the house for hours, and we’ll have our own songs worked up, and then we’ll meet up in Nashville with Mark, and he’ll add his bass line to it. It always is perfect. He always comes up with exactly what we had in our minds for what it should sound like. Because the two of us live together, it’s easy. We write all the songs, and Mark will put his touch on it.

J.D.: Plus it’s only two hours away, and that’s nothing. If you’re a traveling musician, you can do that standing on your head.

Is songwriting more immediate or a process for you?

J.D.: It can be either. You can wake up with a song in your head like “She and Us Pets,” or you can labor over something to get the words just right, if you had a little bit more to say, so that involves a process more. You can have a melody first. You know, I try to keep a little handbook, or a notebook, of interesting little sayings and words and things I find interesting. If I have a melody come in my head, later on, I’ll go back to my book and see the rhythm of those words, if it fits with the melody. Then I’ll marry those up and the ball’s rolling. I’d say a lot of the songs are written that way. Sometimes the ones you write in two minutes are the best ones, though. You never know.

Your songs often feature some less common instruments, like the kazoo. Do you write with additions like that in mind, or do they come after a song is mostly structured?

Jessica: Again it depends, but a lot of the times you’re in the studio, and you come up with things you didn’t think of before, and it’s kind of playful, and you add things to it. But the kazoo, actually, we wrote it with that in mind.

J.D.: If we’re going to try to tackle hot jazz songs where typically there’d be a horn section, well, we don’t play the horn. We can’t play the horn while we’re playing a banjo, so a kazoo kind of gives you the same effect a lot of the time, sort of a vocal instrument like that. What’s more important is that the listener gets the picture. We may not be able to pull off a horn section, but you can get the horn line through a kazoo.

Do you approach your work with The Dirt Daubers differently from The Shack Shakers?

J.D.: Well, I’m just as fired up about both. This is a little different. I have the luxury of having all these years of experience making mistakes with The Shack Shakers that I can correct now with a new band. All the things I wish I could have done different with The Shack Shakers, you know, when you’re in a band for 15 years, there’s highs and lows, and there’s ups and downs, and then there’s regrets and things you are proud of.

As far as music goes?

J.D.: As far as music or running the business, anything. So with The Dirt Daubers, I’m kind of able to use the wisdom I’ve acquired from running a band for 15 years, and I’m able to apply those lessons to a new band, starting out fresh like we are.

Do you think your type of music has an aesthetic and culture as well as a sound?

J.D.: Oh, definitely. It’s aesthetic by nature. We don’t live in the 1920s anymore, and at the same time, we like to dress up in these nice clothes onstage, but it is kind of…well, we like to do that in our everyday life, too. We feel like we can get away with it, you know, being artistes. But we play it up more onstage; there is an aesthetic, but at the same time, we don’t want to be these anachronisms that no one can relate to. So we kind of split the difference between drawing our influence from the past but being people of the 21st century, too.

Who or what influences your songs?

Jessica: A lot of where we live is very inspiring. I’m fairly new to the area, but J.D.’s been writing about Paducah and the south for most of his career, and not living here, I can see why. It’s very inspiring. There’s a lot of strangeness and beauty where we live, mostly strangeness [laughs], but it’s in a great way, and really fuels writing and art in every way. I can completely relate to where his songs come from now. They’re all real, and they’re all stories that, you know, I can go visit these places that he’s writing about. I’ve found myself writing similar things, because it starts to affect the way you see things. That’s where a lot of influence comes from, I think. But also, you know, love. J.D. doesn’t write about love that much, but I can’t help but be affected by that kind of stuff in writing. And personal experiences. I’ve got another one coming up about the flood that we just went through. We just had a really bad flood here in Kentucky, so I’ve got a couple songs about that for the next record.

J.D.: So much of the old-time music was like the old troubadours reporting on what happened, the latest murder drama for the town over, like murder ballads, tales of tragedy and things like that. That was the Fox News of the past. We’re just carrying on that oral tradition, in a way. But having Jessica in the band, she can insert all that girlie love stuff.

Who would you collaborate with if time was not an issue?

J.D.: Well, I’m a big Tom Waits fan, but I also like Ralph Stanley. There’s a dream list there that goes on and on and on. Even though we write songs in an old-timey way, there’s a lot of contemporary artists that, boy, I’d give my left arm to sit down next to. Well, hell, we’re going to get to see Wanda Jackson here pretty soon. I know Jfessica’s a big fan of hers. It’s great that we’re born in a time when we’re a handshake away from meeting people that lived through the Depression era and the rougher times – the best era in music ever, I believe, and they’re still alive and still out there. I think it’s real important for us to get to meet them before they die and for us to carry that tradition on. 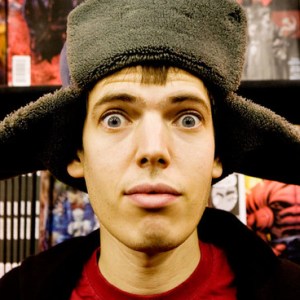 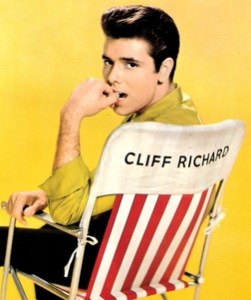