Series executive producer and writer David Mills, who died unexpectedly of a brain aneurysm on March 30, was hugely proud of the number of actual New Orleans musicians the show employed. During a panel discussion on the show in mid-March, at the Tennessee Williams Literary Festival, he interrupted the moderator to point out that the show’s first season had featured 50 to 75 local musicians.

Mills was a huge music fan. He’d penned an oral history of George Clinton and Parliament-Funkadelic, and had more recently been writing a chatty, personal, music-focused blog, Undercover Black Man. According to Simon, when Treme came around, Mills was pretty much done with the world of TV; it was the culture of New Orleans that lured him back in.

“He was in some ways emotionally done with television,” Simon says of Mills. “So I was sort of in the mode of leaving breadcrumbs outside his cave and hoping to lure him out. And those breadcrumbs were New Orleans, and its remarkable mix of race and politics and culture, and ultimately music. And that’s what got him.”

“It’s infuriating to me in a ‘What-was-God-thinking, was God drunk, does God even exist?’ kind of way that he would die a week before the pilot aired. It’s been weeks and I can’t really get my head around it.”

New Orleanians themselves have mostly taken to the show with fascination. (The Times-Picayune’s TV critic, Dave Walker, has a blog on the paper’s website dedicated to the show that is so thorough, it’s almost obsessive.) They’re inured to inaccurate and cheesy depictions of themselves on both the big and little screen, from The Big Easy to K-Ville. The idea that Treme will be something different is seductive—a show where characters call each other “brah” instead of “cher,” and drink at Bullet’s in the 7th Ward and the Spotted Cat on Frenchmen, not on Bourbon Street.

“[The show] is all a fiction; it’s all artifice,” Simon says. “But it’s referencing something that’s real, and worthwhile.”

That real thing, the gossamer-thin, layered and tangled nuance of New Orleans culture, is a challenging thing to depict even minus the extra, roiling layer of emotion that the aftermath of Katrina added. But David Simon is not joking in his attempt to get New Orleans “right.” With a newsroom background, he’s methodical about ferreting out facts, checking them and then checking them again. That’s not to say there aren’t moments of fantasy, like the now-infamous “magical” Hubig’s pie served by character Janette Desautel in the first episode (the factory hadn’t reopened in December ’05) and truth-stretching (Batiste playing trombone in a Bourbon Street strip club, where live music hasn’t backed nude dancers since the ‘70s).

Working with Simon, co-creator Eric Overmyer and the late Mills on season one is a solid team of local writers and consultants. It includes Tom Piazza, a New Orleans writer who wrote two major post-Katrina texts—the nonfiction Why New Orleans Matters and the novel City of Refuge—plus several books on jazz. Lolis Eric Elie, a longtime Times-Picayune columnist, a food and jazz writer and a producer of the documentary Faubourg Treme: The Untold Story of Black New Orleans, is also in the writers’ room. Donald Harrison, Jr., a contemporary jazz trumpeter and son of the late Mardi Gras Indian Big Chief Harrison, Sr., consults on matters Indian. Local musician and DJ Davis Rogan also weighs in—the character Davis McAlary is based, in part, on him. One scene, the Mardi Gras Indian memorial service in episode three, was fully re-shot after receiving negative notes from Guardians of the Flame Indians Big Queen Cherice Harrison-Nelson and Yellow Pocahontas Big Chief Darryl Montana, plus other Indians who were called in to vet the scene for authenticity. The Treme writing team is not messing around. And there’ll be a second season coming to see whether their attention to detail is successful.

New Orleans is a welcoming city that depends on pleasing tourists with food, a smiling face, and even more so, music. Its paradox is that its “real” self—the traditions and true culture at the root of all of that—is deeply complex and maddeningly hard to know, informed by centuries of poverty, crime, race and cultural issues. There’s no substitute for the credential of being from here, or at least being here in the right place, as Blake Leyh learned—in New Orleans, his sister’s paint job on “Uncle” Lionel’s bass drum is, indeed, greater currency than any Hollywood resume.

David Simon and company are trying, but he recognizes the tall order. “I’ve asked Donald some stuff where he just flat-out says, ‘No, I can’t tell you that.’ I asked him, ‘What does ‘two-way-pocky-way’ [the Mardi Gras Indian chant] really mean?’” Simon says. “And he just smiled and talked around it. I’m thinking, dude, come on, you’re a consultant—Consult! But he said ‘no.’”

The music in Treme adds even greater depth and substance to the story of a community that is already complicated—but there’s also a great chance that the music’s integral role in the show will engage viewers in the story on that deeper level. After all, hundreds of Crescent City transplants have moved to the city on little more encouragement than one really killer Jazz Fest weekend.

New Orleanians dig the tiny inside jokes and love letters to their city that each song represents, as the soundtrack annotates the story. Musicians everywhere will enjoy the uniquely realistic representation of their daily grind. And outsiders who have never heard Kermit Ruffins at Bullet’s on a Tuesday night, hopefully, will be moved to care about the show the way the creators of Treme care about the music they use.

“All the machinations of publishing and the music industry, we try not to take any of that into consideration,” Leyh says. “We try to just pick the music that we want to use.” 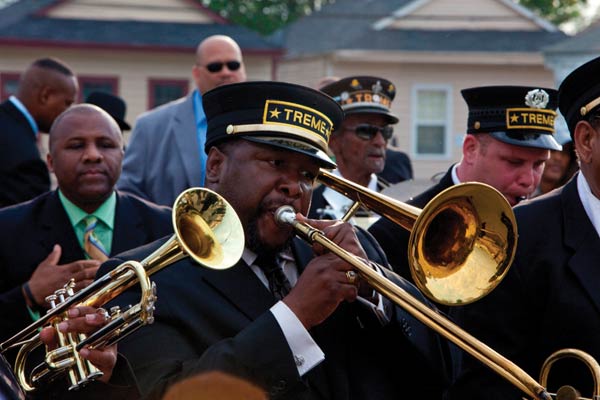