The meaning behind Mexican singer-songwriter Carin León‘s biggest hit, “El Tóxico,” which translates to “the toxic,” is just that.

The music from the Hermosillo, Mexico-born artist consists mainly of heartfelt norteño and banda music that is equipped with gripping lyrics and highly emotive deliveries that transcend borders. With their deep contemplations on love and loss, León’s songs have quickly catapulted him up the U.S. Latin charts and right into the feels of Spanish and non-Spanish speakers alike.

However, his most well-known chart-topper, “El Tóxico,” is not as tender as the other hits he wears on his sleeve. A song that spent 28 weeks on the Billboard Hot Latin Songs chart, peaking at No. 9 and becoming an instant ear-worm, “El Tóxico” isn’t just a tune about getting over a bad breakup. “El Tóxico” is about getting even.

Accompanied by Grupo Firme, a Regional Mexican band, León’s words bite as he narrates a breakup and gives his ex fair warning that he is ready to be “El Tóxico.”

León wastes no time, promising to be his ex’s worst nightmare. The song opens with Porque para amarme / Te di mil razones / Voy a darte el doble / Pero pa’ que me odies / Y con ganas de no haberme conocido / Voy a ser tu peor castigo / Voy a ser la piedra en tu camino, which translates (via lyricstranslated) to Because I gave you a thousand reasons to love me / I’m going to give you double. / But for you to hate me and to wish you had never met me / I’m going to be your worst punishment /I’m going to be the stone in your road.

From the jump, León and Grupo Firme make it known that this will not be an easy breakup. There will be no clean break, no staying amicable, and no exchanging of possessions. “I’m going to be your worst punishment,” the song promises.

Te daba mi vida / Y te valió madre / Cuando más te amaba / Te fuiste sin darme explicaciones / Fui el mejor el mejor de tus amores / Hoy el peor de tus errores, the song continues, meaning I gave you my life and it was worth nothing to you / When I loved you the most, you left me without an explanation / I was the best, the best out of your lovers / Today, your worst mistake.

The love ended for one party while the other hangs on. “I was the best, the best out of your lovers,” he sings, but now things have turned sour and the dumper will soon regret their decision.

You’re going to abhor me / Because I swear I’m going to hold on, the lyrics explain in the lines: Me vas a aborrecer / Porque te juro que voy a aferrarme.

I’m going to be your ex, the toxic one / The unnameable. / A nightmare, a toothache, they sing in the words: Voy a ser tu ex, el tóxico / El innombrable / Una pesadilla, un dolor de muelas.

The ex is going to pay for this heartache, “El Tóxico” promises. The song continues to explain the lengths the dumped will go to in order to exact their revenge. Even the dog I’m going to poison, the tune lists with Y, de paso, hasta el perro voy a envenenarte.

Y no te imaginas qué alacrán te echaste / En tu perra vida, vas a hallar la calma / Hasta que te mueras o hasta que me mates, the threats come to a climax before the song repeats. You can’t imagine what a scorpion you’ve made for yourself / In your bitch life, you’re going to look for calm / Until you die or until you kill me, they sing.

León has become a familiar face on the U.S. Latin charts over the past few years.

Photo by Bryan Steffy/Getty Images for The Latin Recording Academy 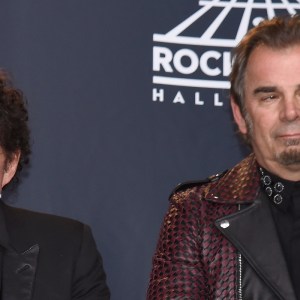