“When you have a record, you have to figure out how to arrange everything, what your song is about, the idea behind the song,” says Tristen. “So when you’re making a video, it’s really just about a good solid story and then visually capturing it.” 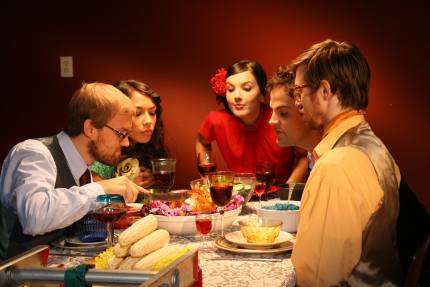 If music be the food of love, then play on. Photo by Jeremy Ferguson.

Here’s a fair warning: blue mashed potatoes may appear spectacular on film, but dear God, don’t eat them unless the very integrity of your art is at stake. Nashville songstress Tristen Gaspaderek and her band learned as much as they huddled in a makeshift studio in East Nashville on a July morning, seated at a faux dinner party in front of a HD camera as they dipped their cutlery into a heaping bowl of hand-crushed taters—all heavily dyed a rich peacock blue.

“I remember, as a kid, food coloring being very potent, but to get it the saturated blue we wanted, we had to put almost the whole bottle in there,” says Tristen. “It was disgusting. Super-theatrical, very cartoon.”

But it was a sacrifice their palates had to make if Tristen’s elaborate vision behind the video for her song “Matchstick Murder”—a song that, like all of her music, offers a buoyant fusion of pop-addled country rock; hear it on her forthcoming LP this fall—was going to take off. As the culprit behind the majority of the video’s concept, Tristen had more than just garish and stomach-churning side items in mind. To make the scheme complete, each one of her four band mates were donned in Clue-esque color-coded attire: cellist and back-up singer/guitarist Larissa Maestro in an emerald green dress to match her salad; drummer Patrick Rodgers in a mustard yellow scarf to match his sweet corn; guitarist Buddy Hughen sprouting a ruffled plum shirt and suede suit jacket opposite his radicchio garnish; upright bassist Eric Lehning’s cornflower blue button-up to complement the famed mashed potatoes; and, in a blood-red blouse at the head of the table, Tristen herself nibbling on cherry relish and glaring at her dinner guests.

“By allowing Tristen to see her vision through as art director, the vibrancy and contrast of color is amazing,” says director Jeff Wilson, a Nashville filmmaker who lent his talents and own home for the shoot. “It’s quite compulsive looking and, I think, it comes across almost like a Last Supper.”

Apart from the cheeky whodunit scenarios, in which mutual suspicions pare down the cast until the murderer is revealed, the video typifies the D.I.Y. acumen of Tristen and Wilson. Both artists, in their respective mediums—she an unsigned musician gigging her way to a break, and he a hidden gem in Nashville’s low-profile film circles—are able to take what little they might have on hand and turn it into art on par with major-label artists or big-budget production companies. It may take a splash of rouge and powder from local makeup artist Alana Schuette, or borrowing a push dolly to capture a steady frame, but with little more than $100 spent on handmade props, a little cash can go a long way with a hefty dose of bootstrap ingenuity.

“It could very well look like a $2,000 video shoot, because, really, it kind of is,” says Wilson. “It looks like a rather intricate set-up that might involve machine designers, [an] art director, production assistants and producers, but it’s just us. You look at a CMT video with a $40,000 budget, and we’re basically getting the same thing,” he adds. “Technology has made things so much cheaper … and the more streamlined it is, the more I’m able to make the aesthetic of the video fit within these certain parameters. I prefer to keep it simple; all my best stuff is done this way.”

On her own, Tristen had attempted a few rough-cut music videos in the past, including a black-and-white of her song “Baby Drugs.” With the exception of a briefly scripted prologue—complete with a toy piano, ‘30s upper-crust attire and farcical, vague East European accents—that had little to do with the actual song, the video was more about capturing their live performance. For “Matchstick Murder,” however, Tristen said she wanted to take full advantage of Wilson’s ability, leave the instruments in their cases and portray the song’s theme through starkly beautiful and playful images. “When you have a record, you have to figure out how to arrange everything, what your song is about, the idea behind the song,” says Tristen. “So when you’re making a video, it’s really just about a good solid story and then visually capturing it.”

For all of the many elements that went into making the video—props, costumes, lights, gear and a plodding day of meticulous work—the end result has the distinct look and feel of the very people who wrote the song in the first place. It’s involved, but not bloated with a full cast and crew; careful but simple; the very qualities that give Tristen’s music such replay value, and Wilson’s work that intangible timelessness so many floor-level, grinding filmmakers try to accomplish.

That individuality may be plentiful with a group like this, and reigning in such diverse talent to commit to the same project may seem quite daunting. But if a lack of resources or social networking becomes a handicap to pursuing inspiration, take Wilson’s word for it that a memorable product doesn’t always equal the sum of its parts. “You’re able to accomplish great things, sometimes, when you don’t have too many people on the set,” he says.
On the other side of that coin is one’s willingness to step outside their own creative process. Not unlike a solo songwriter recruiting a backing band to lend their songs the depth they deserve, even a half-day video shoot requires a level of basic trust. After all, as any seasoned musician can attest, even the most disciplined art requires a certain amount of breathing room to remain durable. “At the end of the day, we’re just artists trying to do whatever it is the universe is telling us to do,” adds Wilson. “There’s times when you’re simply exercising your reason for living.”

Watch the final video below:

Win a trip to Nashville and a video shoot for our DIY Video Contest sponsored by AVID. To enter visit www.americansongspace.com/contest/diyvideo 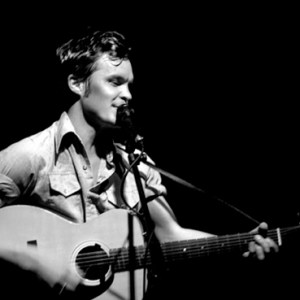 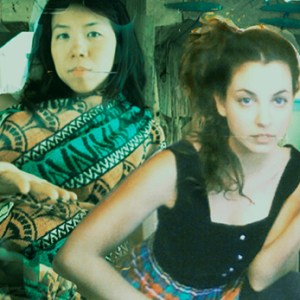