“I remember wanting to be a professional,” Aidan Knight told American Songwriter.

On Tuesday, the Vancouver Island, B.C.-based artist released “Sixteen Stares,” the first single off his forthcoming fourth record Aidan Knight, out August 28 via Next Door Records. The single serves as a good encapsulation of the record as a whole, as it captures Knight’s blend between frank introspection and nostalgia. This makes sense considering that the song was inspired by Knight’s time in Los Angeles when he was 22 years old, when he wanted to ‘be a professional.’

“In the fall of 2008, I was temporarily living in Burbank and recording behind the Figure 8 wall mural from that Elliott Smith record cover,” Knight said. “The studio is gone now, as is half of the mural, but we were there from each morning at 10 a.m. until we stumbled out, home to sleep. The idea was that I would make a living playing on other people’s records, hired on by great producers who wanted me to come in and just know what the song needed. I knew how to play in time and wasn’t ‘too much’ and that seemed like the right recipe. Before then, I was living at home trying to figure out how to write songs, make some money to record them and not getting much of anywhere, so all this seemed like a big moment, to be here playing on this record and finally getting somewhere.”

Musically, “Sixteen Stares” is understated but poignant. With a tonality similar to Cass McCombs’s early work, Knight creates a palpable mood of reminiscing, but in a uniquely American way. The sparse arrangement works perfectly with Knight’s smooth voice, creating a sound that’s like an aural memory. 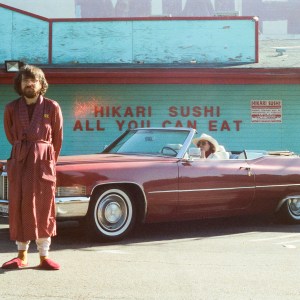