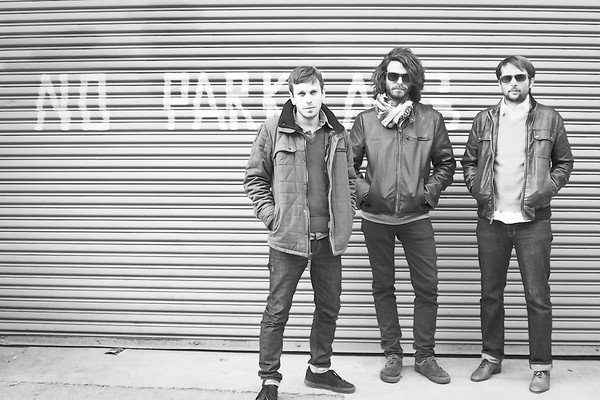 Dan Schwartz can sing higher than you. He’s been schooled by Jerry Douglas, he wears a size 8 shoe, and he spends most of his ‘alone’ time in a van on the road with Keith Goodwin (who can dance better than you) and Tim Arnold (who can hambone better than you). When he’s not spending his down time with two other dudes, he’s playing two guitars at once for Good Old War.

In order for us to have the best conversation ever, Schwartz has begged that we go somewhere with some of Nashville’s best treats — barbeque and bushwhackers. So, over an alcoholic milkshake, Schwartz and I chatted it up on the porch of Edley’s, where befuddled onlookers cast glances at our witty conversation and tried to figure out how the rock star in the Ray-Bans managed to get a date with such a beautiful blonde.

This Philadelphia native knows a good restaurant, and a good town, when he visits one—as he should, considering Good Old War has spent the last months (and years) all over the country with Anthony Green, Dr. Dog, Xavier Rudd, Guster, and pretty much anyone else you can think of. By the time you forget to read this, they’ll be somewhere deep in America with Counting Crows. For now though, he’s sitting with me, claiming to be allergic to the Tennessee air.

Schwartz is the quintessential American songwriter. He’s been writing songs since he was about ten, going through a brief Bon Jovi phase and somehow ending up with quite a knack for writing folk-pop gems. After some of his first songs at a young age, he continued writing songs year after year, joining up with former Days Away members, Tim Arnold and Keith Goodwin, to form a group named after pieces of their last names. Schwartz and I obligatorily talk songwriting first, sweating and laughing through most of the discussion of the group’s writing process.

“It changes every time. What I would do was bring full songs in; Keith brings in very strong melodies with all the parts the ways he wants us and lets us make up our own parts around them. For me, I usually have the guitar part done.”

In fact, Schwartz brought many of the early songs to the group nearly completed.

“’Coney Island’ didn’t change much.” “Looking for Shelter” and “Window” were pretty close to the original demos. Keith and I did demos early on that didn’t change much. A lot of the early stuff was done together, where Keith and I would do demos for, like, “We’ve Come A Long Way.” Our very first demos for the first record were pretty spot on for what they ended up sounding like on the record.”

Schwartz tells me that lately, though, the band has been writing “totally differently.”

“Now more than ever its been less done songs; sometimes I would bring in a demo that has everything on it. It’s way more collaborative now. I’ll have an almost done idea, and I’ll bring it in earlier just to get everybody’s opinion. Everybody’s doing that, everybody’s trusting each other so much [musically].”

This trust has come a long way, and it shows from the records to the stage. Their opening appearances have gained them quite a bit of attention, and the hardworking band is certainly deserving of all the recognition they’ve received.

Talking with Schwartz, it’s clear that he is wildly passionate and easily excitable about the group’s success and what they get to do every day. He has a tattoo of his first guitar on his arm, and his young grin rarely fades for a moment through our entire conversation. If I didn’t know any better, I’d think he was going to buy a round for the whole restaurant, or at least invite me to join the band. Unfortunately, he doesn’t. But, he does give me a little insight onto some of the challenges that come along with being a prolific and gifted writer.

“I think the most part challenging part of writing is making sure that you’re being honest. You want to challenge yourself musically, so you want to make sure you have new feels all the time, you have to surprise yourself and come up with sounds that are going to be new to the listeners. You can’t repeat yourself. You can’t write the same song over and over. But you have to be honest with the things that are happening to you in your life. And say the same thing is happening in your life; how do you come up with a new feel to express the same things? And being able to say the things that you want to say, without giving away too much, while still actually being expressive and true.”

Schwartz’s honesty and expression are even more palpable on stage, a place Good Old War rehearses for extensively. Off the road, the group rehearses nearly every day, all day. Take a look at their performance on Conan from a couple of months ago, and you’ll notice that the group never misses a note-despite Schwartz’s ceaseless dancing. In fact, unless a fan in Cleveland is buying them shots, the group is probably putting on a pretty “flawless” show, according to Schwartz. And, in regards to messing up harmonies and words, Dan sings the group’s praises pretty highly. 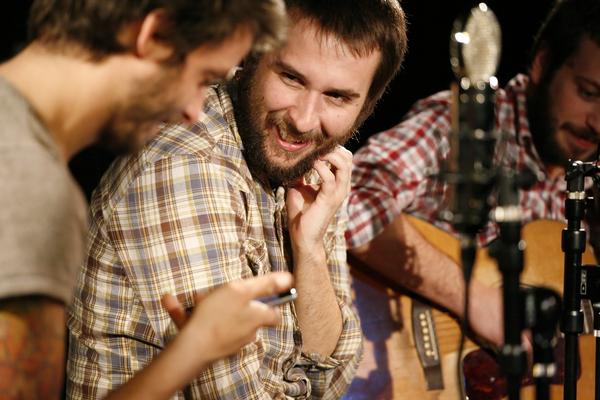 Those rare flukes certainly haven’t hindered the group too much. Their latest album Come Back As Rain dropped in March with strong reviews. The record shows growth, but not complete divergence from the group’s past; most importantly, it’s song after song created by truly dedicated and talented songwriters. Learning some of the personal history of the songs over our second bushwhacker, I pry about the timing of the songwriting—wondering which girl inspired which song at which time. And pressing about why some songs come from so long ago, when there are a lot of newer songs that didn’t make the cut.

“Sometimes they just aren’t ready. You know? We didn’t know how to do that yet. Certain things you just don’t get the feel right the first time. We weren’t ready for it; we didn’t have it down. There are songs that we recorded for this record that are fully done that didn’t make it just because they didn’t work in the flow…. “

Goodwin, the band’s lead singer (who often masquerades as a talented dancer on stage) writes quite a bit as well. He wrote the first two singles from the album, “Better Weather” and “Amazing Eyes,” the latter of which is unfortunately not about me. According to Schwartz, sometimes, the songs come to the table but don’t end up making the final album cut, like the title track “Come Back As Rain” which didn’t end up on the record. Some songs, however, end up being favorites among the whole group.

“’Not Quite Happiness’ is one that I think we all feel collectively proud of. That was also a very early song I wrote….that was an old song…we all feel a little bit choked up when we hear it, because it means something different to all of us.”

It’s not surprising that Schwartz has the ability to be choked up by a song; if there’s one thing I’ve gathered from getting to chat with him, it’s that he’s overwhelmingly genuine. His sincerity, humility, and excitement are infectious. The easiest way to make Dan Schwartz light up? Talk with him about Good Old War’s tour mates.

“Our openers have been incredible. How can I choose between Yukon Blonde, Audra Mae, and The Belle Brigade and Family of the Year? All four of those bands have equally stolen my heart for different reasons.”

“Alison Krauss was like going to school for us. They taught us so much about how to tour, what to look forward to in our future if we keep it together and we’re smart. And musically, how good you can possibly be… We’re a lucky band.” 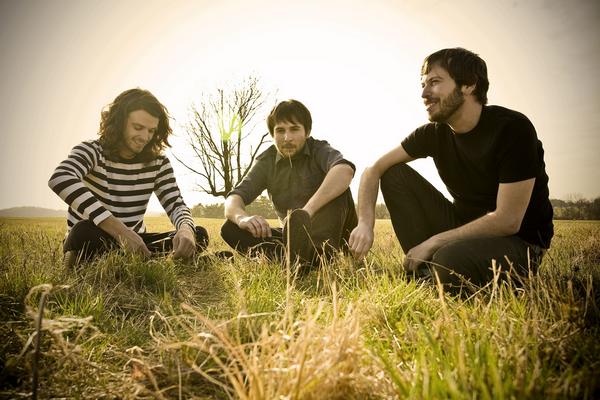 This lucky band has worked its way into such good fortune—driving to the corners of the United States, Canada, and Europe, and somehow stopping just long enough to record an album. Schwartz is humbled by it all, and grateful for the way their work has paid off. What he isn’t probably as grateful for? The lengthy game of rapid fire we’re about to play in the Nashville heat.

What is the best Simon and Garfunkel song?

What is the coolest place you’ve ever written a song?

In the van. On the way to the show.

If you could steal any famous musician’s hair, whose would you steal?

What’s the hardest song you’ve ever had to learn to play on guitar?

What’s the song that you’re most likely to mess up on stage?

What is the last album that you listened to all the way through?

What’s one thing you forget to do almost every single day?

What song would you like played at your funeral?

I can say Tim’s is “It’s all in the Game.” Mine is going to have to be a Paul Simon song of some kind. “Slip Slidin’ Away.” I love that song. That’s one of my favorite songs ever written.

What’s the car you would want to drive if you had four kids?

I’d probably be the guy who ends up getting a Miata and is like, fit in!

What’s your favorite chord to play on the guitar?

It always seems to come back to G. I’m a bluegrass guy at heart.

If you could turn any large animal into a household pet, what would it be?

A song called “Change The World,” a positive reggae song. . .  a reggae-into-punk song. That was at the very end of high school. It’s one of those songs that haunts me. It’s terrible. It’s so bad.

If there was one thing that was socially acceptable for men to wear that women get to wear, what do you think it should be?

I think men should be able to wear skirts. I think it makes more sense for our bodies.

If you had to play a song at the birth of your first child, what would you play?

“Isn’t she Lovely,”–hopefully it’s a girl. By Stevie Wonder. That’s a great song about a baby being born.

Who are the two people who deserve the most thanks in your life?

[Label founder] Cathy Pellow and you.

It’s a perfectly charming way to end the interview, with both of us feeling flattered (and probably a bit exasperated). Despite the exasperation, it’s a perfectly satisfying conversation, and Schwartz is thankful for the opportunity to talk about what he does.  And, in order to see exactly what Schwartz, Goodwin, and Arnold do best, keep an eye out this summer; I highly doubt you’ll be disappointed when you find them. 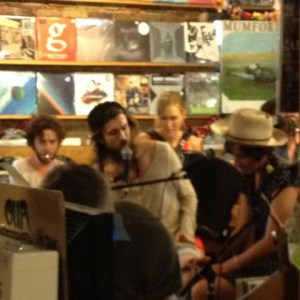