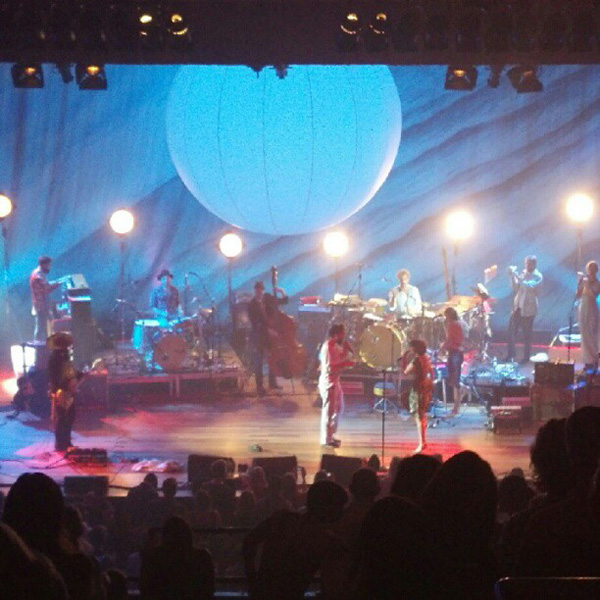 To say that there are two sides of Edward Sharpe & the Magnetic Zeros would not be much of a surprise to anyone: Edward, after all, is the dreamed-up alter ego/fantasy persona of frontman Alex Ebert, an LA guy who fought through addiction, recovery and a questionable electronic band, Ima Robot, to emerge as a white-clad, hippie prophet who can pen a killer melody. So there’s Ebert then, and there’s Ebert now.

Yet after two shows in Nashville last night – one at the beloved local record store Grimey’s and one at the Ryman Auditorium – it was clear that these two sides of Ebert extend even beyond pre and post-Edward Sharpe. They exist between night and day.

As the crowd lined up around Grimey’s during their lunch break (an event you could only get access to by preordering a copy of the band’s sophomore release Home), the eleven members of Edward Sharpe & the Magnetic Zeros mulled about somewhere inside; setting up mic stands, making room for numerous shakers, tambourines and an accordion amongst the endless boxes of LP’s and used CD’s. Folks walking up the side street could see Ebert mulling around on the balcony outside of the store, wearing a black baseball cap, shorts and his usual white henley. Save for the brown strands of hair that hung under his hat, he could pass for any sort of Nashville musician – there are a lot of beards here, after all.

And atop a stool with his bandmates in corner of the shop ensconced in vinyl, the tone was a more subdued one than the prototypical Edward Sharpe, who recently danced his way into the audience of Late Night with David Letterman while performing the single “Man on Fire.” Fellow vocalist Jade Castrinos, ever jubilant, was her usual self, smiling while singing as if she were delivering the best news of your life with every syllable. Ebert, mellow, surveyed the crammed-in crowd. “What should we play?” he’d ask the band in a soft hush, deciding on a set of tracks all from the new release including “I Don’t Want to Pray,” “That’s What’s Up,” “One Love to Another” and “Man on Fire.” 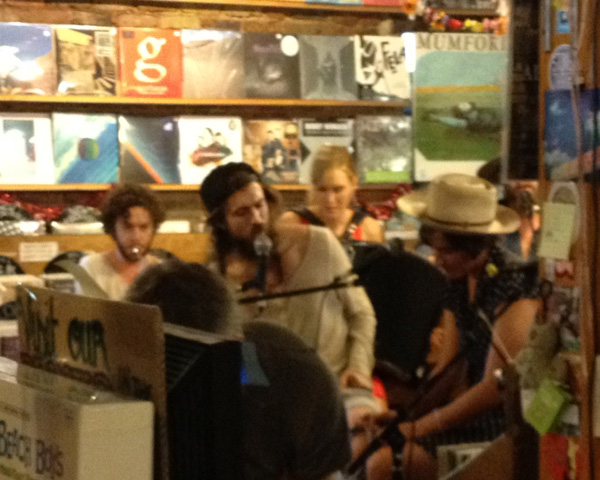 Maybe it’s because when you think of Ebert, you think of him barefoot and chanting with the crowd – Joseph and the Monochromatic Dreamcoat, if you will. So seeing him seated and delivering his songs in a more simple, matter-of-fact fashion actually does a great service to the rich, infinitely hummable melodies and warmth of the sound. You also see Ebert as the conductor – directing a shaker to beat double-time, voices to go loud or soft or for the fiddle to chime in.

Later that night, as a huge white ball glowed on the stage, lighting up seemingly endless instruments, Ebert transformed. Emerging in his whites, he began dancing as soon as he hit the stage, joined by the band and Old Crow Medicine Show’s Ketch Secor and Gill Landry, who both wailed away. Secor, whose band toured with Edward Sharpe on the Railroad Revival tour, would appear sporadically on the side of the stage, dancing mightily for his friends.

Early tunes like “Up From Below” and “40 Day Dream” had roused the crowd from their seats, particularly when Ebert launched into the audience for the latter – which he would do several times over the course of the night. “I think this is illegal,” he said, climbing across the pews and holding hands with a star-struck fan.

The band then launched into an extremely extended version of “Awake My Body,” a song that appeared on Ebert’s solo release, Alexander. As the song progressed into a jam, the players began to sit down on different corners of the stage, watching as Ebert commanded solos by placing “whistling” hat on to the head of his band members. This is where the show began to lose a little steam – although understandably vital to the group’s role as merry-pranksters, the tone, despite Ebert’s consistent bopping about, dragged some of the momentum from the night.

After the hat made its final round, what could be considered the second half of the show built the energy up after a slower “I Don’t Wanna Pray,” with the ever-cheerful new tune “That’s What’s Up,” fan favorite “Janglin,” “Man on Fire,” and the sweet-obsessive tribute to his former lover Castrinos, “Jade.” Then the band hushed. Ebert was consulting someone in the back. “Oh for real?” he said, turning to the crowd again. “We have just 25 minutes left. We spent about 45 on ‘Awake my Body,’ so that makes sense.” If there’s a fault with the stage performance, it’s that the whole thing is a bit too loose – no set list and jams provide a sense of spontaneity, sure, but they also rob the show of a smarter flow of songs and pacing that would push the whole thing to the next level. Their records are good enough that the novelty of the characters and stage show doesn’t have to be a selling point.

They used the remaining time – no encore, just continued music – to play songs including their anthem “Home,” which had the Ryman literally bouncing as Castrinos and Ebert frolicked in the pews again. “Hey Alex, do you remember that time we played the Ryman?” Castrinos said during their banter-filled interlude. The evening ended with a booming “Om Nashi Me,” drawing to a close a day that showed two sides of the man that some call Edward Sharpe and some call Alex. Whoever he has been, who he is now and who he is when he wakes up is a mystery to us, and maybe we’ll never know. No matter. In the world of the Magnetic Zeros, just show up and keep singing, and you’ll have a place dancing with the crowd. 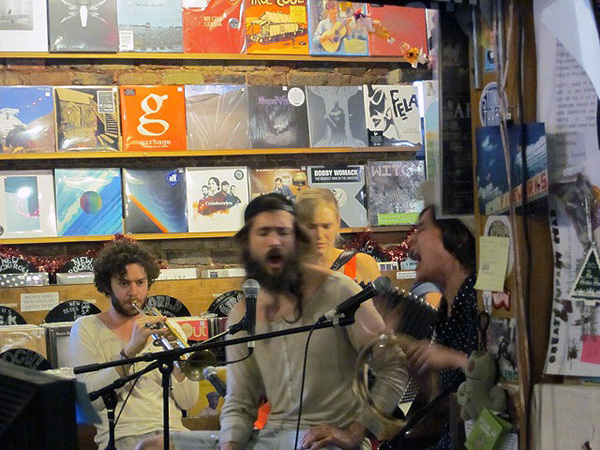 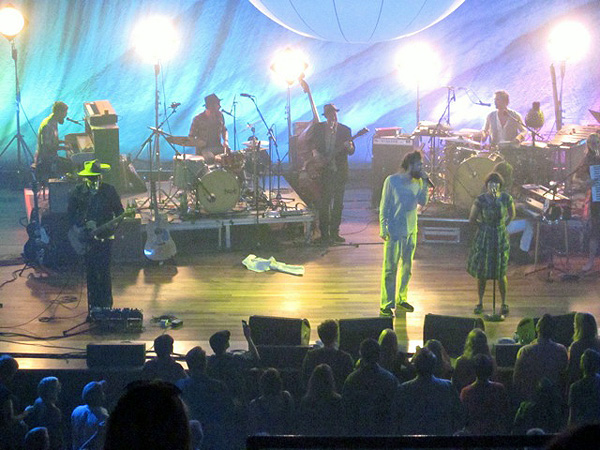 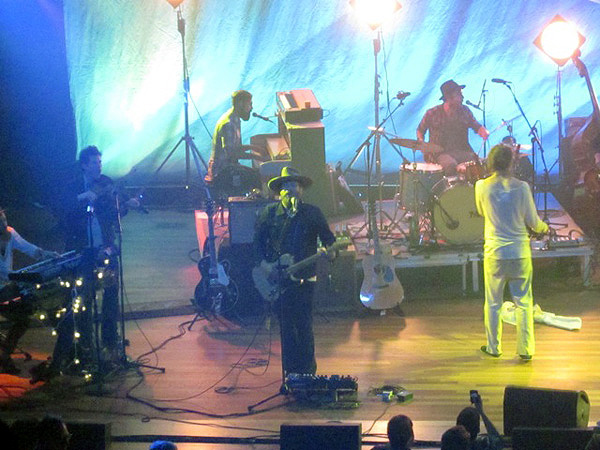 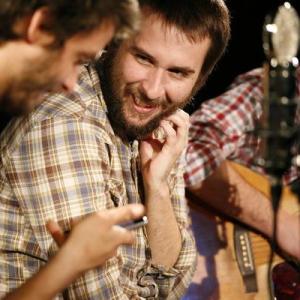 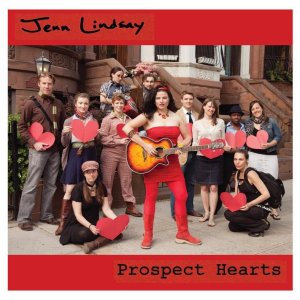