Skip Matheny— currently a songwriter in the band Roman Candle and former bartender in a retirement community — caught up with Simon Balthazar of Fanfarlo. Their latest record Let’s Go Extinct is out now on Blue Horizon Ventures. 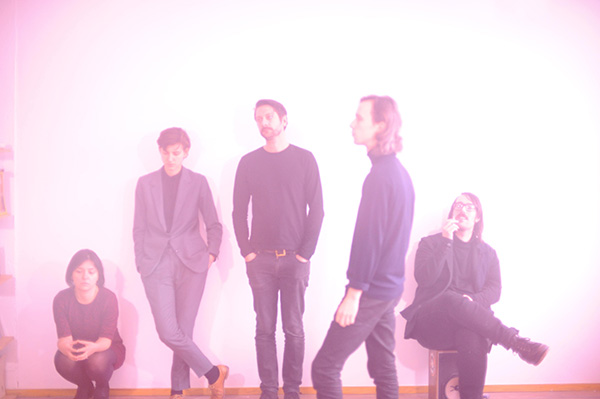 (laughs) I mean, I love drinking all sorts of things, alcoholic and non. At the risk of being boring, Green Tea I think. Green tea is a winner. I can drink so much of the stuff and it’s great for writing as well.

How did was the writing and arranging for the songs on Let’s Go Extinct go for you as a band? Did you bring sketches of songs for the band to work through, or were the songs pretty well finished when you all started work? Did you all do a lot of arranging in the studio?

I tend to write on my own and do some demoing at home. I’ve got a home studio set-up, but the writing can happen quite quickly. I had some ideas in my head while we were touring — touring is good for that. I spend a lot of time staring out the window and making some notes and stuff. I always carry bits of paper around with me and make little recordings. So, yeah, writing is a very kind of solitary pursuit for me. But then we get together, and sometimes we just flesh out the songs. Sometimes we completely re-work it in really unexpected ways. It’s the beauty of playing in a band. I guess I can imagine being a solo artist must be quite a lonely life because you don’t have that same kind of bond [of working in a band]. A lot of the writing, arranging, and recording happened at this house where we’ve set up a temporary studio in Wales. It’s just this house that had been sitting empty for twenty years. A friend of ours had just bought it and — it’s like a construction site actually —  we just set up a temporary studio there and recorded. First, we got together and just stayed there for a week and just wrote and arranged. We just got on the same page of what we were doing. Then we went to our residential studio with David Wrench, who’s just got a really good ear and really good taste in music. We sort of knew we could trust him to get the right drum sounds, that sort of thing. Then we went back to this house out in the countryside and just holed up there. We didn’t leave the house for ten days. We just stayed up all night, drank lots of wine, stayed around the fire, and just really created our own world. I think that’s really important. With our second record we had this producer come over that we had never met before and we were working with a bigger label. It just felt really hard to create our own world and let the record happen. This time around it was very sort of spontaneous. Or easy. Well, maybe not easy. It’s always a bit stressful, but we could just let the record go where it wanted to go. I think we were able to do that because we had created this kind of bubble around ourselves.

That sounds amazing. So have you all had the chance to work before like that? In some isolated period of time where you “create your own world” like you said ? Do you all have an easier time working with vaguely imposed restrictions? Like being in Wales for several days with your head in a record?

The only restriction really was that we had a certain urgency. We didn’t really want to take our time, we just wanted the record to happen. We came straight off the road and we were just aching to make another record. So we were just on a roll because we were like “let’s just make this happen.” But, apart from that, I think that the whole point of being in this kind of bubble was that there were no restrictions, you know? I mean, I’m a real night owl. I’m not cut out for starting at a certain time and finishing it in a certain time. I always find that the interesting shit always happens after hours.

I can relate to that. What was a typical day like while you were out there working?

We would always kind of slip through the day and then get to a point somewhere around one or two in the morning. You’re just kind of cocooned and your minds start melding together. You kind of become a unit and you can kind of do whatever you want. I guess at about that time of night you might be kind of drunk or tired or just a but delirious, and that’s when you lose your inhibition. You stop worrying about the world, and it is much easier to do that when you’re on your own. When you’re writing, as a songwriter, you can be in your own world. But as part of a group of people, I think it is crucial to find that sort of environment where you can just stop caring about everything else. I find that that happens after hours. It happens at night when you’re tired or when you stop putting the pressure on yourself.

I don’t think I mentioned this earlier, but we have actually chatted before a few years ago in Austin at sxsw.

Oh we did? where was that?

I can’t remember exactly. It was some alley near downtown in the early afternoon. I think we talked about Kate Bush.

(Laughs) That sounds like something that would happen in Austin.

Yes indeed.  It seems like a lot attention was paid to the tones or even just the plain sounds on this record. I love the ticking of the clock that opens up the third song on this record. And some of the synth tones, they are all wonderfully peculiar, and seem like they took some work to sort out.

That ticking clock is from this BBC Sound Effects Record (laughs). There are footsteps as well on that song that are also from BBC movie sound effects.

The BBC. They do good work. (laughs) Talking about sounds and textures that make up the finished album, how much thought and effort goes into the actual production of getting from a song idea to a completed recording for you all. As a band, if you are fleshing out a song in a room, are you playing different instruments every hour?  Does everybody stick to their own thing?

I mean, it’s hard. It really depends on who you are, obviously.  I think in the studio we are not a very live-oriented band. The studio is really its own world for us; it is its own art. Obviously we’ll always put down a live, basic track type-of-thing. But once we have the skeleton, that’s when you can do things that you could never do live. Like put textures from old records, as I said before…synths and white noise and arpeggios, endless layers of percussion on top of voices. We play some orchestral instruments between us, but we can’t afford to have a whole orchestra. So we can create, like at the end of a song called “Painting with Life” there is this big crazy, punchy orchestra. Doing things like that is what we love doing in the studio. That is a lot of the fun of it.

Do you have habits when you write? Same time of day? Particular Desk? Never sitting at a desk?

Well, to be honest, I think that writing is the kind of thing that always tends to happen when you’re doing something else. When it comes to songwriting, I find that I always get ideas when I’m out walking. The only thing that I probably do if I’m actually going out to write is go out and walk. I don’t know what it is about walking (Laughs). Walking has a long history, you know. It goes back to ancient thinkers talking about the value of walking when you are thinking. That’s the only habit I have is walking and keeping a dictaphone with me. I think really the only habit I have is to just go out walking.

Who are some lyricists that you are admire? Anyone you have been listening to recently?

I’ve been listening to Bill Nelson a lot. I know that he is doing stuff still, which I am not as familiar with. I have been mainly listening to his 80’s records. He is a UK experimental musician, but I think he started out doing kind of straightforward, singer-songwriter rock. In the 80s he did these kind of home recorded, really great, crazy, home-made, new wave pop rock records. He’s now doing more experimental ambient stuff that I’m less familiar with, but I love what he did in the 80s. He makes me think of Arthur Russell—they seem kindred in some way.

Do you have any authors or books that your were really attached to while writing these days?

Well, I can think of a few things. I really like Miroslav Holub, he’s a Czech poet. He’s quite famous as a poet, but he mainly sees himself as a doctor–an immunologist. But I really love how he has a real sort of Eastern European sensibility, a sort of dryness about how he writes.  You can maybe see how that appeals to me (laughs)..I don’t know. But the cross-section between science and philosophy, kind of expressed in human terms. In the same kind of way, and in a slightly more academic take on that is Jorge Luis Borges. He’s quite famous too — an Argentinian writer. He’s a guy that I always come back to. He’s sort of bonkers. He’s so dry and academic but what he is actually saying is great. I find a lot of joy in what he writes. And a third one would be Vonnegut. I love Kurt Vonnegut, he loves playing with ideas.

When you are writing lyrics do you find yourself using bits of visual inspiration. Films, paintings, etc?

Yeah sure, of course. I think inspiration is contagious. I think if you put yourself in a place where you can tap into someone else’s inspiration, than it doesn’t really matter what it is. It could be reading a book like Borges. But visually, I love going to art galleries and checking out exhibitions. And I love, especially, surrealist art because it has that quality of just opening up your mind. It obviously set out to open up your mind to unexpected things and puts together things that don’t obviously go together. I find that it creates unexpected connections. Visual art can definitely do that. It can pine up your mind to unexpected ideas.

Thanks for your time Simon. Great to chat again.

Thank you. And I’ll see you again in an alley in Austin sometime. 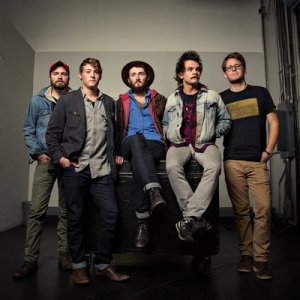