Today, No Thank You share their third LP, Embroidered Foliage, and it’s something between a breakup album, a revenge album, and a self-love album. Whatever it is, it’s a deeply cathartic follow-up to the Philadelphia indie rock trio’s last record, All It Takes To Ruin It All, which saw vocalist / guitarist Kaytee Della Monica trying to process immense grief following the loss of her father.

“Body so small it’s amazing that we fit at all,” she sings in All It Takes’ aptly-titled closing number, “Space to Grieve,” “and I’ve got a call to arms to do self harm.” Despite those bleak opening lines, “Space to Grieve” builds into something fierce and resilient and life-affirming: “Maybe I could finally see that we are all more than human beings,” Della Monica belts in the track. The last line gives me chills: “I’m planting violets for you.”

Embroidered Foliage, Della Monica recently told me over the phone, is “less about the actual grief, but more [about] my impulsive reactions to my grief and how they manifested in a relationship that I just was in because I wasn’t necessarily emotionally stable or making the best choices.”

When Della Monica first started working on the songs that would become Embroidered Foliage, she thought she might make an acoustic EP. Her bandmates—bassist Evan Bernard and drummer Nick Holdorf—convinced her to ditch that idea and helped her flesh out the album, whose ten tracks range from dark post-punk (“Embroidered Foliage,” “Airport”) to head-banging indie rock (“Saturn Rings,” “Enough”) to coiled pop-punk (“Strange & Wonderful,” “Letter Writing Contest”).

American Songwriter: When and where did you write the songs that appear on Embroidered Foliage?

Kaytee Della Monica: Most of it was actually written in my bedroom in West Philly on an acoustic guitar, alone. Then I took it to the band and we made it a full-band thing. It was probably 2017 and 2018 when a lot of the songs came to fruition.

Did you know this collection was going to become an album?

Did you make some demos for the EP, or was the EP just an idea you abandoned?

It was really an idea. I mean, I have demos of me alone playing on an acoustic guitar, but I didn’t ever really fulfill the entirety of it. I think that was probably for the better because I was wrought with emotion in writing it and I don’t know that the acoustic EP would’ve had the same effect that it has now, so I’m glad that they told me to do that.

What are some of those emotions that drive these songs?

Anger, revenge. It’s mostly trying to make another person feel bad for what they did to me and then how I can better myself to make that not happen again, or what I needed to do to get to the other side of it.

I read that your last record dealt with grief around the loss of your father. Do you see any threads from that last record resurface in Embroidered Foliage?

Definitely. I would say it’s less about the actual grief, but more [about] my impulsive reactions to my grief and how they manifested in a relationship that I just was in because I wasn’t necessarily emotionally stable or making the best choices. And I think that’s the thread—I was still not a whole person after writing my second record and going through the grief process, which is different for everyone. It doesn’t necessarily have to be as specific as ‘I’m mourning this thing and that’s how I feel,’ but more [about] the ways that I’m acting out because of my feelings. Does that make sense?

Yeah, totally. In the opening number “Saturn Return” you sing “It’s time to stop wasting time hating yourself.” Is that a self-directive, or is it directed at someone else?

Why did you want to open the album here?

I think that the beginning of the song is super powerful with Nick’s drumming, and I thought that would be a cool way to open the record. I’m very particular about the order in which songs [appear] on a record, which I’m sure most people are. And I think it was an opening like, “You have this opportunity of self-discovery and learning how to grow up a little bit and stop feeling self-pity and just accept things and move past them.” I think that was a really big part of it for me—to not loathe myself and to accept things more and figure out how to move past things.

You said in a recent press statement, about Embroidered Foliage, “I was likely following my usual pattern of self destruction, but what ultimately came from the introspection was of the utmost importance: a glimmer of self worth.” Are there specific songs you trace to that self-destructive tendency or that arc toward self worth?

I think the beginning of the arc would be “Saturn Return,” for sure. I think that’s the bottom of the loathing or the rise of self-discovery. The next four songs are more self-destruction, like reminiscing [about] a toxic relationship and romanticizing it. I would say the second half of the record is more realizing that you don’t deserve or need to be treated in ways that aren’t worthy. The second half of the record is coming back on the upswing of self-worth, ending with “Leo Moon,” which I feel is very much full discovery, full realization of ‘This is who you are. You don’t need to apologize for it. Learn how to be that person and accept that it’s okay to be that person.’

I’m so glad you brought up that song, because I was just thinking about the refrain, “I’m learning to let go.” I have to ask, are you a Leo moon?

I am. I’m into astrology, one would say.

What does being a Leo moon entail, for those who might not know?

So your moon sign is what you feel, how your emotions [operate], and Leos are generally… I’m really bad at saying any positive qualities about Leos but that might just be because my dad was a Leo, one of my very close friends is a Leo, and it’s easy for me to pick out the flaws in those people. But I would say pride, self-involvement, ego, those are the central points of having a Leo moon.

It’s an interesting dynamic because my sun is in Cancer and my moon is in Leo, and Leo rules the sun and Cancer rules the moon, so I’m sort of flopped on that. Being a Cancer, that’s a very emotional sign, it’s very intuitive, empathetic, nurturing. It has a shell though—it’s the sign of the crab. It has walls but internally is very loving and loyal, whereas Leo is very prideful and self-involved. I have this weird dynamic of being both of those things—loving myself while also hating myself. But I’m learning to love the part that loves myself.

So Embroidered Foliage documents that process?

Yeah. I was asked the other day what I want someone to take out of [the album]. To me, going through this relationship and what I learned from it, I just want other people to be capable of loving themselves and learning how to accept your flaws and how to not let other people talk down at you about them or judge you for them. Everyone is worth something, and you just have to figure out what your strong suits are and trust them and feel good about yourself. Everyone has something to feel good about themselves about.

Lastly, where does the phrase “embroidered foliage” come from?

The word “foliage” was a particularly important word between me and this person. I would say it’s a targeted word for them, but the phrase “embroidered foliage” has to do with two things.

One is I have this little outfit that one might wear in a sexual encounter that has an embroidered velvety foliage look that this person liked, but on top of that I work for an auction house and we sold this painting a year or two ago that was by an artist called “The Master of Embroidered Foliage.” The name always really stuck with me and I was finishing the record while we sold it.

I had seen the painting several times before it sold, but I never really thought about it. Then, as we were selling it, I was just like, “Wow, ‘embroidered foliage,’ that’s it. That’s the title.” It came to me very serendipitously and fit so perfectly that I couldn’t not take it for my own.

Embroidered Foliage is out now via Lame-O Records. You can order it here. 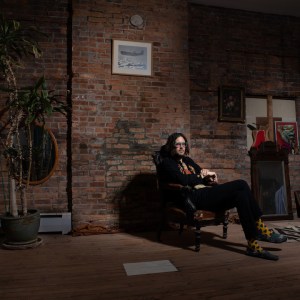