Freedy Johnston’s songs are stunningly melodic, lyrically acute and sound good on the radio. They are also as clever, tricky and dangerous as a first-rate thief you might meet on the street. While he’s spinning some yarn about all the trouble he’s seen, he also has his hand in your pocket. You end up walking away, with a smile, impressed with this guy’s attempt to get some of your spare change. Until you check and realize, dude’s just picked your pocket. Yep, Johnston’s that sneaky and that good. With Neon Repairman, his new album, and first in five years, he does exactly what that grifter is capable of. He tells you a story that seems so damned entertaining. But when it’s over, despite being impressed, you feel like you’ve just been worked over by one of the greats. And you have.

Johnston recently spoke about his cast of remarkably unreliable characters. The guy who’s ditching his trailer park girlfriend and heading to L.A. in “TV In My Arms,” or the shady soul who’s trying to pick up a diner waitress (who seems manifestly uninterested in him) in the Country-rocker “By The Broke Streetlight.” The songsmith says he’s not purposely trawling the noir side of town. That it’s all about craft.

“Every song requires its own rules,” says the Kansas native. “Even rules of grammar. I’m working on a dozen new songs. And they each have their own requirements. I can tell that that kind of song wants those kinds of words and this one wants these kind. There’s a (beautiful) ballad on the new record called ‘Baby, Baby Come Home.’ It seemed like it needed to be gothic and simple, because it’s set not in the modern era. I see the song set in the 19th century. So you can’t mention anything like electric lights or cars.”

Perhaps best known for his chiming, menacing hit single, “Bad Reputation,” and his consistently fine run of albums for Elektra in the ‘90s, Johnston also had to listen to another voice that dictated how he’d make his ‘Repairman’ work: that of his smallish budget. After a successful crowd-sourcing campaign, the singer-songwriter had to find a good producer, who wouldn’t break him financially. He turned to a truly reliable guy-himself.

“I felt like I just wanted to record the songs and mix them. And this time I felt like I could fulfill both roles,” he says. “So I did it, once, and it came out great. Although I don’t think I want to do it again. T-Bone (Burnett, who produced one of Johnston’s records) really knows how to turn the knobs and get the weird-ass sounds we all love. But I can’t. Still, I think now I could produce other people. Just not myself.”

Then there’s the lonely, haunting title song. About a guy driving from town to town, fixing the burned-out bulbs in the signs that light our way across America. One can’t help but wonder if “Neon Repairman” was a kind of a modern cousin of Jimmy Webb’s “Wichita Lineman.” It turns out there really is a connection.

“I’ve always played ‘Wichita Lineman’ and even cut it on my album Live At McCabe’s. I have this female singer-songwriter friend down in Austin, Seela, who would always say to me, ‘Write that song!’ whatever it was. One day, I just took out a legal pad and wrote out the Webb tune. I had a few lines of ‘Neon Repairman,’ and I’d put them in where they seemed to fit. And whatever the Wichita lineman was doing, I’d try to reflect that in my song.”

And what’s that perfect, lonely little instrument that strums in the background?

“I did the demo on bouzouki and that bouzouki is what you hear on the record,” says Freedy Johnston. “I was in Texas at the time. I looked out the window at all this bleak terrain and that’s kind of how the song got born. It was a good way to write and start the album. Which I really like, by the way. But with all the work that went into it? I’m also really glad it’s done.” 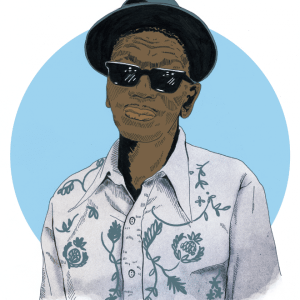 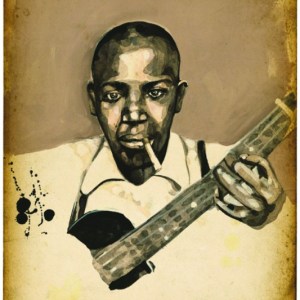