Fifteen years in the making, Gone West is a quartet of dear friends, each of them artists in their own right, seeking a shared experience. Band members Colbie Calliat, Jason Reeves, Justin Kawika Young, and Nelly Jones joined forces after spending 2016 on the road with Calliat’s Malibu Sessions. The collective journey, dogs included, outshone each of their respective tour experiences. Their debut album, Canyons, released today embraces their intersecting influences to smear genre lines.

It all started in 2005 when Jason, an Iowa-native, made his way down to Colbie’s home in the southern part of the Sunshine State. Through luck and mutual friends, the two began to write together, eventually compiling tracks for Colbie’s debut 2007 album, Coco. Concurrently, they recently met Justin and became fans of his music in Hawaii. When it came time to take the record on the road, Colbie asked Justin to join her band on guitar. He has toured with her ever since. The last piece of the puzzle came together in a Nashville writer’s room in 2009. Jason was paired with Nelly to write for her band, The JaneDear Girls. What began as a friendship turned romantic quickly. Jason and Nelly have now been married for eight years.

“Talking about sound is difficult, but I think what ties all of us together sonically is the desire to tell a real story in our music. To be honest in our songs. That desire to say something authentic is really important to us,” Jason explained about Gone West’s unison. “We wanted our music to be organic because all of us come from an organic-based musical background. Whether it’s acoustic pop or folk or Hawaiian Music or country music or Americana -that’s the thread that runs through all of us. It’s been fun weaving all of those different colored threads into a kind of rug for this album. Gone West is a tapestry if you will.”

The band feels that what separates them most from contemporary acts is their rotating role of lead singer throughout Canyons. “I think it keeps it interesting for the listener on the album and during the show,” Jason offered about the practice. “We all get to enjoy watching the other person perform, so it’s like we get a show at the same time.”

Album opener, “Gone West,” Colbie’s favorite, seals the seams of the band’s fabric. It embraces the essence of the group, not only in title but also in production. Each band member sings lead throughout. With all members hailing from West of Tennessee, the song follows westbound highways to the places they each call home. Starting with California, where “the canyons fall into the deep blue sea”, the lyrics “sail off to search the islands” in Hawaii, then “follow the light” to Amarillo, then up to where “the corn grows” to Iowa.

“How we wrote this song is different,” Colbie explained of the leading track. “We wrote the chorus together, but the verses by ourselves, for our other person. It just tells our story, and I feel like the sound of it encompasses us completely.”

On the closing end, Jason highlighted his favorite, “Tides.” “It’s kind of like the sound of a wave in the ocean,” Jason described. The song pays tribute to Justin’s Hawaiin roots with reverence for the ancient dialect.

“When we were writing it and recording it, he had one of his friends whose knowledgeable about the Hawaiian language make sure that what we were saying was accurate,” he continued about the production process. “Even the way he sang everything, we were constantly checking with people in Hawaii to make sure it was legitimate and accurate. It was cool to see such care from Justin to make sure that was the case.”

Between these two bookends lies eleven songs. The harmonious “When To Say Goodbye” exhibits the group’s first attempt at writing together. “Knew You” is a stripped-down acoustic reggae-country with tongue-in-cheek lyrical references. “Slow Down” is among Colbie’s top tracks. As the last one written for the album, the sun-drenched song echoes with the nostalgia similar to the likes of Fleetwood Mac and The Eagles. “Gamblin’ Town” was written with friend and early Gone West supporter, Liz Rose. It serves as a metaphor for the band, betting on themselves and their music.

“I love every single song on the album” Colbie admitted of Canyons. “Because we’ve been working on it for three years and because all of us we’re so heavily involved in making it what we each love individually and together. We forced 13 songs on there because we couldn’t leave one off. They were all our babies.”

Like much of the industry, the group has felt the virus’s most substantial implications in their tour schedule. Every single show of the year is canceled, including opening acts with Kenny Chesney. For the time being, Gone West is focusing on the delivery of this full-length alum, following their 2019 EP, Tides.

“Just like Tides, Canyons suggests changes, ups and downs, sometimes the unexpected,” Jason responded to their year so far. “So our music goes toward places that we can’t even see yet, over the horizon.” 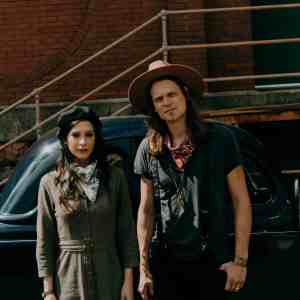