We’ve charted quite a few Americana and country songs in this column, but here’s something a little different: a chart for a “power ballad.” If you’re ready for something a little more challenging, get your guitar, grab your capo and try this.

This song was demoed in 2006, and our goal was to “bring it up to date” and make it “less country” than the older demo. We recorded with producer and engineer Fett at Azalea Studios in Nashville. The rhythm section was Ron Krasinski on the studio’s drums, Eric Bikales on YAMAHA MOX-8 keyboards, Dave Webb on bass and me on my Santa Cruz OM guitar.

Fett had the idea of using a drum loop, so he found one that sounded like it would fit the song really well. We also bumped up the tempo two or three beats per minute. The first thing I thought when I saw the chart  (diagram 1) was, “Wow, that’s not ‘three chords and the truth!’ Maybe 20 chords and the truth.” We talked down the chart and decided I would fingerpick on the intro and verses and switch to strumming on the “lift” (pre-chorus) and chorus. That’s a pretty common thing to do.

After looking over the chords in A, I decided to use a capo on the second fret and play as if I were in G to get some nice open chord voicings for fingerpicking. I’m a “hybrid” picker (flatpick and acrylic fingernails), which makes an easy switch from picking to strumming.

After listening to the original demo, it became apparent that arpeggios were needed in the intro and bridge on the first and third bars. This was not indicated in the chart, so I’m glad we listened to that. After a couple of passes, Dave switched to a ’70s era Hondo II Professional Fretless bass and ran it through a BOSS GT6-B pedalboard. That really added a lot.

Let’s look at the intro: the first bar is a split bar, two beats of G and two beats of D/F#. The keyboards and acoustic guitar both played arpeggios in unison. Guitar players tend to think of a chord as a five- or six-string handful of notes, as opposed to a three-note triad. I didn’t play a big fat open G chord and a big fat D/F#. I played three notes on the G chord: G D G and three notes on the D chord: F# D F#, covering just one octave for each chord.

Remember also, we’ve got our capo on the second fret for this. So what I’m playing looks like F to C/E  (diagrams 2 and 3) as opposed to G to D/F#. When you play with a keyboard, you have to be careful about cluttering things up, so you have to pay attention to range and chord voicings more than when you’re playing solo. And the bass player and the left hand of the keyboard need to stay out of each other’s way, as well.

The beauty of a number chart or chord chart as opposed to a written part is that the player can interpret the music and decide what to play and what not to play based on his or her experience of playing in that particular genre, and, more importantly, what the other musicians are playing at that exact moment in time.

Every chord in the intro is a split bar (two beats for each chord) except the last bar of five, which is in parentheses. This indicates a 2/4 bar. The last four could have also been written as a 2/4 bar, which would have made the last five of the intro a full bar. Are you with me?

Now, in the first line of the verse, second bar, we have two beats of a 4 chord (D) and two beats of a 4/3 (D over C#). However, remember that we’re playing acoustic with a capo on the second fret, so what I’m fingering is a C chord with a B in the bass. You find this chord in a lot of Beatles songs. But the catch is, if you play a regular open C and just move the bass note to B that voicing sounds terrible. So you have to leave out the E note (fourth string, second fret) to make it sound better (diagram 4 )

As we continue in the verse, we find that the last bar of the first line of the verse is 3chord for two beats, then 3sus4 for one beat, and back to 3 chord. Since I’m thinking in G, I play a B (diagram 5) to a Bsus4 (diagram 6) and back.

During the “lift,” the second bar is another split bar, but it’s divided a different way. The 2m7 is played for one beat, 5 for one beat and the 1 chord. We changed the Ima7 on the chart to a plain 1, because the maj7 sounded a little “corny.”

The flat 6 to the flat7 leading up to the one chord is a common “dramatic” sounding chord progression.

The bridge restates the arpeggiated sound of the intro with some harmonic variation. We tag the chorus, and for the last two bars of the ritard at the end the drum loop was turned off.

Now it was my turn for overdubs on the electric guitar for the “power chords” in the lifts and choruses. I used my St. Blues solid-body guitar from Memphis and my Tech 21 Trademark 60 amp on the distortion channel. This is a very versatile amp and guitar combination. I played eighth notes on the lift and whole notes on the chorus. A couple of keyboard overdubs with the help of a Ventilator pedal for organ sounds and we were done. A different, more “pop” sounding singer was brought in later for the lead vocal and it came out sounding great. 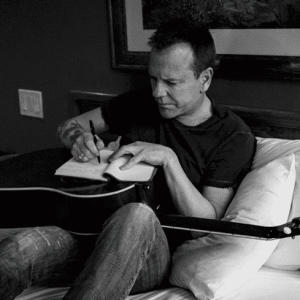 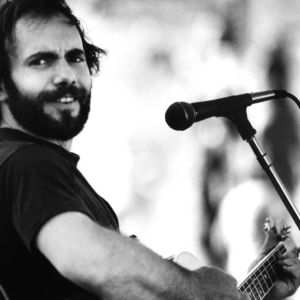