Legendary songwriter and performer John Mellencamp says the songs he writes are sent to him. “I’m just a conduit,” he says, “for whatever message is being sent to me.”

When it comes to the songs on Mellencamp’s newest LP, Strictly A One-Eyed Jack, which was released on Friday (January 21), the artist says he knows exactly who sent them. The American actor and director, John Huston. “They gotta be,” Mellencamp says. Huston, he adds, was definitely a “one-eyed Jack.” And while the new LP is not about Huston, per se, the songs, Mellencamp says, are sent from the late auteur (Huston died in 1987). No matter how they got into his creative mind, the songs on Mellencamp’s newest record are largely stunning. They feature his ever-so-gravely voice, as well as his somber tone and nuanced touch.

“You have to be open to the gods,” says Mellencamp, “or whatever it is that sends songwriters songs. I did not sit down and think, ‘I want to write a song called, “I Always Lie To Strangers,”’ but I was sitting there and all of a sudden there was a voice in my head that said, ‘John you should write these words down.’”

Thinking back on his illustrious career, which includes a Grammy Award and an induction into the Rock and Roll Hall of Fame, Mellencamp says that decades ago when he was coming up and eventually making a name for himself with hits like “Jack & Diane,” he was trying to control his songs, control the impulses and artful voices in his head. Now, though, that’s much less the case on his new LP, which includes the track, “I Always Lie To Strangers.”

Mellencamp’s parents were only around 20 years old when they got married and he was born. “So,” Mellencamp says, “they were kids.” They played music around the house. He grew up listening to Woody Guthrie, jazz, and to “all kinds of music.” At 12 years old, Mellencamp found himself fronting a band where every other member ranged from 17 to 21. This was in the mid-’60s and Mellencamp remembers performing in bars. “They didn’t give a shit,” he laughs. The group was called Crepe Soul. He enjoyed singing, liked the attention.

“I was fascinated with a world that I shouldn’t have been in,” Mellencamp says. “Can you imagine today letting your 13-year-old son go to a bar?”

It was around then, he took his first drink, a habit he stopped at 21 years old and he hasn’t had another since. More than anything else, throughout his seven decades on earth, Mellencamp says he’s lived an artist’s life. He adds that he doesn’t own an easy chair. Instead, he works. He creates something new every day, whether it’s a song or a painting, which he’s also fond of. He’s had “maybe two straight jobs” in my whole life. He’s never had to work for a wage. As such, he doesn’t look back. He doesn’t feel nostalgic. Today, now in his 70s, Mellencamp likes to watch the world unfurl in front of him.

“As an older gentleman,” he says, “I have grown into being more of an observer of life rather than a liver of life. I don’t need to go out and experience things myself. I can watch other people and try to figure out the difference between what people say and what people do.”

You don’t have to prod Mellencamp to get him to offer his true opinion on matters even though others around him, he says, aren’t as forthright.

“That’s why I have songs like ‘Like To Me,’” he says. “I’m used to it. Schools lied to us. Churches lied to us. The government lied to us. We’ve been lied to our whole life. We accept it and live with it. Not only that, but we do the same thing!”

Mellencamp remembers when Cuba and the Soviet Union had literal missiles pointed at the United States. Life is always trouble.

“Doesn’t get any more dangerous than that!” he says. “They could have blown us right off the map.”

To quote the Talking Heads: It’s the same as it ever was. And Mellencamp essentially agrees. There is more access to news these days, yes. But the news itself isn’t necessarily any better or worse. Some may bristle at what he has to say, though. For a Heartland rocker, there are likely many in the Heartland who don’t support his at times-critical stances. But that’s just fine with him. When it comes to the opinions of others, Mellencamp carries no baggage.

Mellencamp is political, at times. Politics shows up in his songs, of course. They also showed up in the festival he co-founded, Farm Aid. Simultaneously, he knows that the easiest thing anyone can do is stand in the background and yell something “sucks.” So, why pay mind to it? On his new LP, the track, “Did You Say Such A Thing,” touches on this, with Mellencamp’s raspy voice offering: How could you say such a thing? But there isn’t worry in the lyric, just reflection. Most of the songs on the new record, including the track, “Wasted Days,” which features Bruce Springsteen, were written pre-pandemic. But more than any content or timeline, what likely stands out most to listeners is Mellencamp’s voice.

“My voice has changed,” he says, “because of my cigarette consumption. I have smoked since I was 14. I’m a dedicated smoker.” He adds, “I just laugh—well, I guess these cigarettes are finally paying off. It makes for a good singing voice but it’s probably not going to help me in the long run with my life.”

Working with Springsteen, Mellencamp says, was easy. He admires The Boss, both the New Jersey artist’s “tenacity” and “humility.” Another person who contributed to the LP was Mellencamp’s 26-year-old son, who painted the album cover. Mellencamp remembers having him paint on his own canvases as a kid; now, the progeny has a formal art degree. As Mellencamp, looks ahead, he says acting, which he did prominently a few decades back, is not in his future. “I can listen to suggestions,” he says, “but I can’t take direction.” He also hates auditioning. What is ahead, though, is a big tour. It was supposed to kick off this month but, due to COVID-19 rates, has been pushed until next January. What’s the rush? For Mellencamp, music is the thing that can keep you fresh, poised at any time. He’s even planning to record another LP later this year.

“To love music,” Mellencamp says, “you have to have an open mind and be a dreamer. This album—John Huston told me these stories and I put them into songs. That’s how crazy I am.” 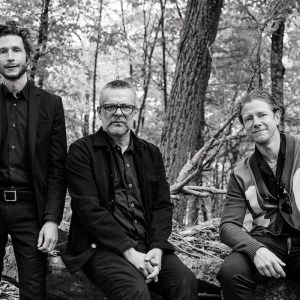