Though it had a good run-from the whimsy of the Beatles’ Sgt. Pepper’s Lonely Hearts Club Band to the harsh isolation of Pink Floyd’s The Wall and the rock opera reprisal of Green Day’s American Idiot-the concept album has largely faded out of usage, left as a punch line to be hung around moribund musicians who are too pretentious to realize that they’ve run out of ideas. But while few songwriters are eager to join the list of artists who have tried and failed to carry out a project with such weighty ambitions, the concept album lives on in the less grandiose visions of indie rock auteurs Colin Meloy (The Decemberists), John Darnielle (Mountain Goats) and John Vanderslice. The last of those, the restlessly imaginative and analog-equipment obsessed Vanderslice, has written no fewer than five conceptually-themed narrative albums, proving his mastery at sustained album-length drama by stranding his imaginary brother on an icebound observation station on 2002’s Time Travel is Lonely and crafting post-911 vignettes on 2005’s Pixel Revolt. But on Romanian Names, Vanderslice’s latest and most inward-looking release, he has narrowed his focus considerably.

“I set out wanting to write songs that were definitely not connected and definitely not in any way narrative or with an arched storyline,” he explains, having just finished ordering parts for his vintage Neve console. “I love telling stories, and I love third and first person narratives, but I wanted to write a different album. Every song that I did, with only a couple of exceptions, was much faster than what I’d usually default to, and it actually made me write different lyrics,” he says excitedly. “So in some ways, I think it allowed me to write shorter verses and write less lyrics. I think that it led to more impressionistic content, because I didn’t have these really long verse forms to fill up with a story, and it ended up making the record more abstract. In some ways, there is a refreshing lack of specific information, which is against my judgment,” he laughs. “I like to be really specific.”

That’s not to say that Vanderslice paints only in broad strokes. There’s a track about being stalked by a snow leopard (“Tremble and Tear”), and another about an Eastern Bloc gymnast escaping the control of her minders and falling in love at the Olympics (“Romanian Names”). There’s a story about cross-dressing at summer camp (“Summer Stock”), and one about a self-absorbed man who only cares about how his lover’s selflessly altruistic deeds reflect on him (“C&O Canal”). Long influenced by the storytelling methods of his favorite filmmakers, Vanderslice remains the director behind the actors in his songs, even if he’s increasingly comfortable letting the listener imagine the scenes.

“If you’re going to be a songwriter, you have to believe that every minuscule slight has importance,” he says. “You have to believe that every little loss that you’ve had is meaningful and can, therefore, be broadcast out in the world and be exaggerated and amplified into a song. There’s a trick there at work, and once you recognize it, you can either use it or it can also end your writing career. I’ve seen people lose their ego. They’ve become much more mature and developed as humans and are unable to write from a first-person perspective. For me, I’ve long realized that any individual is about as important as an ant colony on a hill in West Texas,” he laughs. “I didn’t have a problem with my ego dissolving over time, as it naturally should,” he says with a comic pause, “unless you’re a sociopath or a megalomaniac.”

HOMETOWN: San Francisco, California
AGE: 42
HIS FAVORITE FILM OF THE MOMENT:
Synecdoche, New York, It really helped me to see it over and over. I think I saw it four times in about a week, so I really got to dig into it. I’m getting into the same kind of movies, what I call “puzzle movies.” I don’t think they work if you casually watch them. I think you have to believe in them and believe that it’s important to dig into them. I think that in all art, there has to be a level of sympathy, no matter what it is. 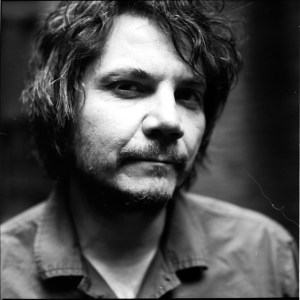