“We wanted to write a song about hiding our inner-demons and being the one in the relationship that is non-commital or has fears of being vulnerable,” says Katie Haynes, one-half of pop duo KTJ & Carly, an endeavor forged with her twin sister Carly.

Their new song “Hidden” excavates personal experiences in dealing with “people who aren’t the committing type” and how they “tend to cringe or have a hard time being honest about their personal insecurities,” Katie tells American Songwriter. “Literally every single person on the planet has at least one insecurity. There’s this stigma in society that’s like, ‘You must be confident to be successful, yadda yadda yadda.’ In that case, I am confident that I don’t always say nice things to myself, and I have an abundance of insecurities.

“I think anyone who is in this business, constantly showing their face online and everywhere, at least at some point in their journey over thinks a lot about the kind of message they’re sending and how they look,” she continues. “The truth is, though, nobody cares. If they don’t like what they see, they’ll continue to scroll, and it doesn’t matter. I think this song is pretty interpretive as well. God keeps us hidden from our destiny and people in our lives until we are ready for it. It’s quite beautiful how things play out.”

Written around Halloween last year, during a time of great creativity, “Hidden” sprouts from deep emotional urgency. “Life is so damn short─why not be your 100 percent authentic self before it’s too late and you realize you’re surrounded by people who don’t even know who you are. We wanted the world to know that they aren’t alone in this feeling and maybe if we achieve a sense of that awareness, it can lead us to the next step of letting our guard down. If we are honest about ourselves and what we are going through, a little discomfort in the beginning can save a lot of pain down the road.”

Unpacking all the clutter in my head, fears in my bed / I ignore them instead, the duo sing. Attacking all the words left unsaid, never at rest / To live for the dead.

“Hidden” follows two previous single releases this year, “Cherry Coke” and more recently “Rollercoaster.” As evidenced in their entire catalog, dating back to their 2019 debut “On Your Mind,” KTJ & Carly never compromise the integrity of their lyrics for the sake of commercial success. While the Dallas natives have carved out quite a space for themselves, their mission remains the same: “to let our listeners know they aren’t crazy and alone in this journey of life.”

“Though each of our journeys are unique, we all feel the same spectrum of emotions. We are all one; the universe experiencing an aspect of itself. Humans are so complex, because dating all the way back to caveman times, it was imperative to be insecure about the parts of ourselves that were deemed out of style or stupid or bad in order to survive,” Katie reflects, “because if we were kicked out of a tribe, we would literally die. But this is the 21st century now. If someone in our tribe doesn’t appreciate or like who we are (and I’m talking about what’s inside, not material), then we can find a new soul tribe that loves us, no matter how ugly we feel.”

As with many artists, KTJ & Carly grew up in a musically-nurturing household. “Our family really inspired us. We are so lucky to be in a family that is so supportive of music. Aside from us both coming out of the womb singing, we grew up around a lot of music,” says Carly, who was named after legendary singer-songwriter Carly Simon, her mother’s favorite artist. Meanwhile, their father played in a band and “always carried music with him.

“I remember when we were little, sitting around our piano room and singing and jamming out while my dad, brother, uncle,” she recalls. “I played guitar, Katie on the piano, my cousins on the drum set, and everyone else banging on tambourines or tables til sunrise. Now that I think about it, that is usually how every family gathering at our house is to this day.”

Their grandfather, also a musician, became a source of inspiration, as well. “Before he died, he made an album of songs on a CD with all songs he wrote before he died. I listened to it a few weeks ago,” continues Carly, “and it always lets my heart know that he would be proud that we were chasing our dreams. Neither my dad or grandad pursued music as their main career but always had it with them. That is the wonderful thing about music. I figured, if this doesn’t work out, I will always have music. And if it does work out, then it’s a win-win.”

With an eye toward their next body of work, tentatively expected in 2022, as well as a slew of upcoming live shows and scoring their first feature film (titled God Save the Queens by Jordan Danger), KTJ & Carly offer up some apt songwriting advice. “Never write a song for anyone other than yourself. In my opinion, there isn’t a wrong or right way to write a song. That’s the beauty of it. Songwriting is a sense of catharsis. It frees us both,” says Carly. “There are so many thoughts going through our head in a day, and the only way to flush out the creativity, ideas, and thoughts is through storytelling. That can be in song-writing, play/screen-writing, acting, photography, graphic design, painting. Telling a story is the ultimate definition of songwriting and anything that creates art. Art reflects life. Don’t let it become about followers or praise. The best advice I could give is” don’t let it become anything else other than your art reflecting your life.” 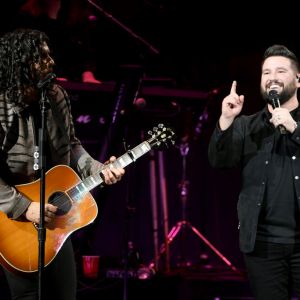 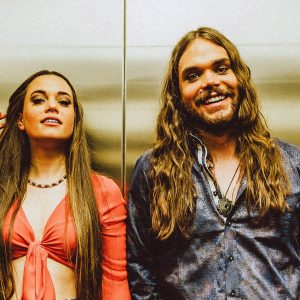