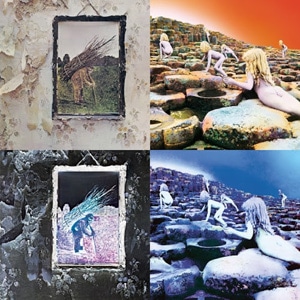 Jimmy Page, never one to miss an opportunity, continues his Led Zeppelin reissue series with these two titles, just in time for Christmas season 2014. As with the first batch released earlier this year, these feature remastered audio of the original tracks on one disc and add, in the deluxe version, a second with remixes and alternate takes although notably no previously unreleased songs.

The passage of time (IV was released in 1971, Houses … in 1973), provides the luxury to reassess these albums, examining them through the looking glass of history and within the broader scope of the group’s overall output. That makes the opening two explosions from IV, the taut “Black Dog” and the irrepressible “Rock and Roll,” seem like a strutting response to the relatively unenthusiastic reception Zeppelin initially received with the largely acoustic III.

There are only two completely unplugged tracks here, although both are terrific and remain high water marks in the Zeppelin catalog. The lovely “Going to California” might be singer Robert Plant’s most reflective and plaintive moment in the Zeppelin oeuvre. It also foreshadowed his more recent delve into Americana roots music with Buddy Miller and Alison Krauss. Adding the wonderful Sandy Denny from Fairport Convention on interwoven lead vocals—tellingly the only woman to assist on a Zeppelin album– helped create the mysterious shroud of “The Battle of Evermore.” The vocal-free version of the latter on the second disc displays Page’s considerable touch on mandolin. The band combined their acoustic and electric sides on the epic “Stairway to Heaven” with results that were, to put it mildly, wildly successful even with clunky, at times cringe-worthy, mystical lyrics. Page’s much heralded patented riffage is in full display on “Misty Mountain Hop” and the driving rhythm of the swampy, minor key “Four Sticks” can be considered one of the set’s hidden gems.

Following IV was challenging, but even though Houses of the Holy may not have attained the lofty commercial success of its predecessor, there were enough flashes of greatness scattered throughout to make it an arguably more interesting and diverse listening experience. Zepp tried, generally successfully, to develop and advance their sound by incorporating reggae (the often maligned, in particular by John Paul Jones, “D’yer Mak’er”) and James Brown inspired funk (the bottom heavy and tricky time signatures of “The Crunge”). Page’s tough stomping lick that opens “The Ocean” remains one of his finest and the John Paul Jones showcase “No Quarter” with its dreamy, spooky piano and loud/soft dynamics was a concert showcase and is one of the band’s finest moments. Zepp added a string section for the first time to bring new textures to the acoustic “The Rain Song,” at nearly eight minutes the disc’s longest and most complex track.

As with the previous three reissues, the pristine remastering removes a slight audio film that was still present after the 1992 versions. That’s especially obvious on the guitar parts of the more delicate songs but also shines a brighter light on John Bonham’s remarkable drumming that both grounded the band and pushed the other members into expanding their own boundaries.

The additional versions of each track on the second or “companion” discs as they are labeled, many of which just remove an instrument or are a slight variation of the mix, don’t provide tremendous insight. It’s also somewhat of a missed opportunity to include live performances that likely exist of the material. Even the alternate studio take of “Stairway to Heaven” sticks pretty close to the released one. These remain for diehards only, of which there are plenty. The packaging stays true to the first vinyl releases; interestingly neither display the band’s name or the album’s title although Houses… replicates the vinyl version’s white tear off strip with that information. Both have 16 page booklets that include some, but not many, rare photos and fully detailed recording data.

Zeppelin was soon to shift to a denser, more progressive approach with the sprawling Physical Graffiti leaving these two classics as a closing of chapter one to the first stage of their extraordinarily influential, if comparatively brief, career. 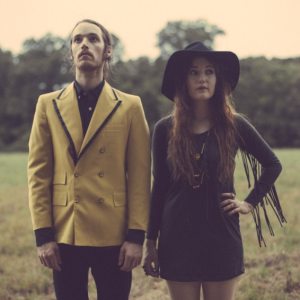 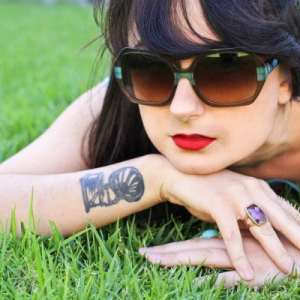