While playing some of Mt. Joy’s hits for American Songwriter’s Behind the Mic series, Matt Quinn candidly explained the songs and what life in quarantine looks like for an artist.

First, Quinn performed “Silver Lining” and “Astrovan” from Mt. Joy’s 2018 self-titled album. “Astrovan” in particular holds a special place in the band’s climb to fame. More specifically, the song was the band’s first official collaboration that they released together as Mt. Joy. And the inspiration for this song details a story similar to Quinn’s own origin story as an emerging singer/songwriter. The band subsequently surfaced as a quintet to watch for.

Here’s Quinn on “Astrovan”: “I was living in LA at the time and seeing people have a lot of success out there in the entertainment industry, but certainly not having any of it myself. It was sort of a joke…. And so the song is just sort of this goofy idea.” Quinn continues, “I pictured Jesus, like, rolling down Sunset Strip and being this guy who’s kind of like an up-and-coming songwriter. And I imagined that instead of having a fancy car like a lot of people do in LA, he would have a van and people would still love him. So that was kind of a joke and obviously expanded into a much bigger song.”

And this song does materialize as a brilliant, quirky piece of Quinn’s mind. The vocals start almost suddenly with the support of a guitar. But on this live stream, Quinn is missing two things from his repertoire: his fans and his band. Quinn comments, “I’m imagining your claps” after one song, and the reality of today’s climate becomes starkly apparent. Artists like Quinn are now reaching out in the few ways that they can, in order to continue relating and connecting with their audience.

Then, before playing “Strangers” off of Mt. Joy’s new album Rearrange Us, Quinn quietly states: “I miss playing with my band…. Jackie [Miclau] has an incredible piano riff on the song, and my whistling doesn’t do it justice. But I’ll give it a shot.”

However, despite Quinn’s unavoidable reality in quarantine, his current journey as an artist is still progressing. When prompted to speak to his current songwriting, Quinn responded, “Thankfully, I’ve had this guitar, and songwriting has just been kind of [a] throwback. Just sitting by myself with my guitar… It’s been fun. A lot of it has been me trying to write goofy songs just to try and lift my spirits, and there’s been some funny ones so far.”

Quinn then neatly winds his live stream down with some empathetic advice and comfort. He pointed out that despite its title, “Death” off of Rearrange Us, is actually about quite the opposite. “It’s really truly a song about the opposite and the importance of leaning into your friends and choosing a path of life and light at times when things get dark.”

Lean into Mt. Joy’s music and listen to their 2020 release, Rearrange Us, below. 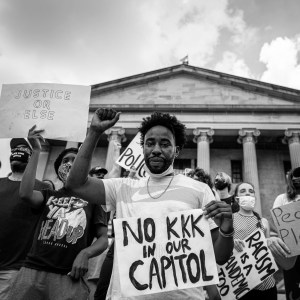