After most creatives do a job together, they typically part ways with the obligational “we should keep in touch.” But schedules get busy and this often becomes an empty promise. That, however, wasn’t the case for Michael C. Hall, Peter Yanowitz and Matt Katz-Bohen, who, after working as colleagues on Hedwig and the Angry Inch, decided to form a band.

During the celebrated Broadway production, Hall portrayed the lead in Hedwig, Yanowitz (the Wallflowers) was on drums, and Katz-Bohen (Blondie) served as the music director. Then, when Yanowitz and Katz-Bohen went out on the Hedwig tour, they forged a bond. “We were like, ‘We should hang out when we get back to New York,’” says Yanowitz. And little to his surprise, they actually followed through, getting together to jam, and coming up with the initial demos for what would become the tracks on the debut EP by Princess Goes to the Butterfly Museum, which drops on April 2nd.

“And after a few months, we had several jams, and were like ‘God, it would be amazing to have a singer,’” Yanowitz recalls. Then, during a dinner with Hall, he played the actor some of the jams. And after loving what he heard, Hall was quick to volunteer. “He said, ‘If you ever need a vocal on these, let me know.’ And I was like, ‘Yeah, come over tomorrow!’” Yanowitz says. Hall then took a stab at adding his voice to top off what the duo had previous created. “He got out his notebook and just started making words, and came in with some words.” And this, per Yanowitz, was “the fun spontaneous beginning of the project.”

The songs on the EP were recorded early on in the band’s genesis. And after the demos were ready, Hall called in acclaimed mixer, Tom Elmhirst, whom he was introduced to through David Bowie during the Lazarus musical. “He agreed to mix some tracks for us,” he says.

The trio describes themselves as “gothadelic rocktronic” – “that’s a combination of Goth and psychedelic, and then the electronic,” says Hall, who laughs and says “ultimately though, I think we’re rock.” Yanowitz chimes in: “yes, with electronics.

Katz-Bohen reveals that the band name was a gift from his daughter. “We were talking about if she was going to be in a band when she gets older. And I was like, ‘what’s it going to be called?’ And she said, ‘Princess Goes to the Butterfly Museum.’ And then she gave it to us with her blessing,” he reveals. Yanowitz notes that the moniker has become a way of defining the direction the band is headed in. “We haven’t stopped working on writing and recording for the last two years and it feels like we always ask ourselves when we have a new idea, ‘does this sound like it could be in the museum?’ So whatever the museum sounds like — the butterfly museum — is kind of what we imagine our music.”

The group dropped “Ketamine,” on December 19th as a teaser to the forthcoming EP. Hall says he had lyrics and a different melody in mind until Yanowitz sent him the baseline. “It cracked open the song for me melodically and it just kind of revealed itself. I sent that along and then Matt and Peter layered in the percussion and the amazing soundscape Matt created for us and made it expansive in a way that I didn’t even realize was in the cards,” he explains.

Hall describes the song as being about “how in a romantic relationship, it’s a difficult thing to sometimes be on your own ride or to be on a ride with someone else.” The lyrics spurred from a therapeutic ketamine session that he did with a partner in a psychiatrist’s office in Santa Barbara, California — “a very sort of neo hippie behavior but it proved like a good metaphor for what it’s like to be in a relationship,” he says. “My experience of my trip was informed by my awareness that she was having her trip beside me and there was some desire for our trips to intersect. And sometimes that felt like it wasn’t possible. And I took some inspiration from that,” he adds.

Then there is “Vicious,” the EP’s next single post release, and one of the first jams that Yanowitz and Katz-Bohen put together. “When Mike came over, he seized on the our ‘vicious’ concept and rolled with that lyrically. The heavy parts used to have a vicious vocal line and we realized it was way more powerful if we just muted that. So it became this kind of heavy head banging instrumental.”

“Come Talk to Me,” was the second single, and the brainchild of Katz-Bohen. “I did most of that one on Ableton at home,” he says, noting that a lot of the inspiration came behind experimenting with a Giorgio Moroder mini synthesizer.

And their latest single, “Love American Style,” was the first tune that Hall lent his vocals to, early on in the band’s formation. “Matt and I just had this instrumental thing and Mike came over and all of a sudden the missing piece just fit right in place.” reveals Yanowitz. “We just felt like, ‘oh, we’re onto something’ or ‘something’s on to us!’” Hall exclaims, noting that tune is about relationships with an out of balance power dynamic. “And somehow that turned into a song about a maybe more macro power imbalance in our current climate.”

Throughout his career, Hall has done everything from musicals to portraying the infamous serial killer who only takes out the deserving in Dexter. But going forward, he will continue to split his time between his two passions. The band, however, has definitely given him a sense of creative freedom that he hasn’t felt before.

“I don’t have plans to give up my day job as an actor, but this has been an incredibly magical surprising and welcoming development in my life,” he explains. Doing Hedwig, says Hall, “gave me the first really substantial taste of what it’s like to front a band and it also in a way led to me doing the Lazarus musical and working with Bowie. All roads just kind of led to me feeling like it made sense to say to Peter: ‘if you want a singer, I’m in’ and the rest just followed from there,” he explains.

Hall admits that his day job often involves him having to commit to embodying someone else’s vision, whereas with the band, he and his partners are in control. “We’re presenting something that emerged from our own sense of what we want to say and the sound we want to make. And so it’s been liberating,” he says.

And for those unaware of his musical side, Hall reveals that his first experiences performing were actually singing in a boy’s choir as a kid. “I’ve been singing longer than I’ve been acting. And I just feel really lucky to have found my river intersecting with these two guys,” he proclaims.

Princess Goes to the Butterfly Museum had a recent string of West Coast dates cancelled due to the coronavirus pandemic. But the band isn’t letting that slow them down. “We’re trying to find new ways to keep playing and sharing our music,” reveals Katz-Bohen. And in the interim, the guys are busy working on new tunes. “We were actually working on some just now before this phone call. And we might even start it up again after this,” Katz-Bohen says. And Hall assures us that there is in fact “more to come!”

Listen, in full, on Spotify or Apple Music. 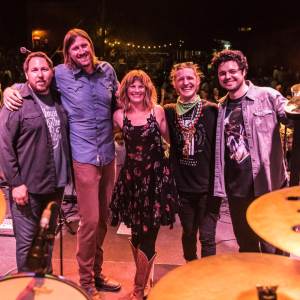 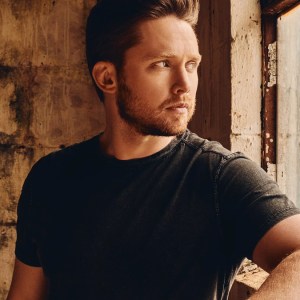